SPIEGEL: Minister Davutoglu, Iran, Turkey's neighbor, is in the midst of the worst unrest since the Islamic Revolution 30 years ago. After having served for many years as Prime Minister Recep Tayyip Erdogan's foreign policy advisor, you are very familiar with Iran. What is your assessment of the situation? 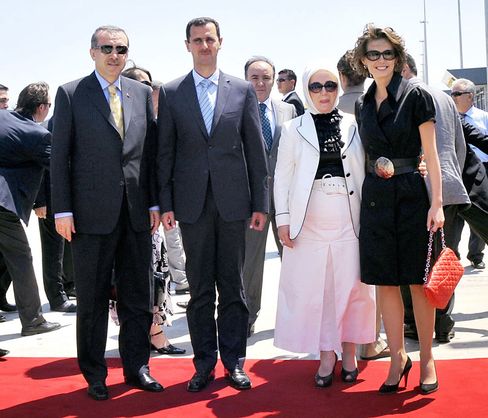 Davutoglu: Turkey and Iran share a very long common history. We know our neighbor -- and have for more than 1,000 years. No one should underestimate or misunderstand this proud country. The political atmosphere there is incredibly dynamic, as is Iranian society. It is very complex and multifaceted.

SPIEGEL: Did you expect political developments in Iran to take such an explosive turn?

Davutoglu: Yes, absolutely. As a country with very close relations with Iran, we knew how dynamic both the society and the political culture there are. I noticed two particularities in this election. First, there was the extremely animated and fiercely contested campaign phase, and then there was the high election turnout. This led to the emergence of very different interpretations of results after the election. I think that we should take this as a sign that the political process in Iran is very healthy.

SPIEGEL: But it is precisely the result that all of the president's challengers are calling into question. According to the opposition, this election was seriously manipulated.

Davutoglu: We must leave the discussion of the issue to the Iranians. We cannot intervene from the outside.

SPIEGEL: Is there not much more at stake here, namely a struggle for democracy?

Davutoglu: That may be true, in the sense that the Iranian masses want to be heard. The people are unwilling to leave politics solely to the state, and they are very passionate. But I am not prepared to pass judgment as to whether or not the elections were properly carried out.

SPIEGEL: Have you congratulated Iranian President Ahmadinejad on his victory?

Davutoglu: Of course. This is standard procedure between two nations with friendly relations.

SPIEGEL: Perhaps you will have to congratulate a new Iranian president once again in the coming weeks.

Davutoglu: In any case, we will respect the outcome of the political conflict in Iran.

SPIEGEL: Then perhaps you could help us to better understand your neighbor Iran. Have we in the West underestimated the "green movement" of reformist candidate Mir Hossein Mousavi?

Davutoglu: It isn't just about Mousavi. I believe that the West generally has a simplified view of the situation. The West is still dominated by a Cold War-like logic when it comes to Iran. This results in a black-and-white image of the country. The true picture is far more complex. Iran also has a system of checks and balances, and it has more than one center of power. And there are various competing movements and individuals. This "human factor" in Iranian politics is often overlooked in the West.

SPIEGEL: Let's talk about President Ahmadinejad, who visited Turkey in the summer of 2008. Doesn't the alleged victory of hardliner Ahmadinejad have to be described as a political step backward for the peace process in the Middle East?

Davutoglu: I don't believe that the ideological division into so-called hardliners or moderates is helpful. As far as relations with other countries are concerned, it is more important to look at a politician's pragmatism. It is in the interest of all parties in the Middle East that we achieve peace and stability, and that we transform our region into a shared zone of prosperity.

Davutoglu: Do you think this political color theory is really useful? Let's not talk about colors. The Iranians are proud people. All of us want to see them bring their own dispute to an end. We hope that these developments will end positively, in line with a participatory political culture.

SPIEGEL: We find it striking that all candidates support the Tehran government's decision to continue the Iranian nuclear program. Even Iranians abroad support it. And the Turkish government has also expressed sympathy for Iran's nuclear aspirations.

Davutoglu: Let me say this quite clearly: The Turkish government has repeatedly emphasized that Iran, like any other nation, is entitled to the peaceful use of nuclear energy. And we have also repeatedly encouraged Iran to cooperate with the International Atomic Energy Agency (IAEA). The Iranians, for their part, have assured us that they don't want nuclear bombs. As long as Tehran develops a peaceful nuclear program in cooperation with the IAEA, we have no objections.

SPIEGEL: Do you trust Tehran? The Europeans and Americans are considerably more skeptical on this issue.

Davutoglu: We think that two principles should be applied here. First, every country has the right to the peaceful use of nuclear energy in consultation with the IAEA. Second, we must abide by the principle of non-proliferation of nuclear weapons. It is important that all countries, including Iran, gain the trust of the international community. We too do not want a nuclear bomb at our doorstep. That's why we proposed the creation of a nuclear weapons-free zone in our region.

SPIEGEL: President Ahmadinejad has repeatedly stated that there is no room for negotiations, at least not on the issue of halting uranium enrichment. How then, with Turkey having offered to serve as an intermediary, do you plan to bring Iran back to the negotiating table?

Davutoglu: I believe that the key lies in a new policy of détente in the region. It is important to reduce political tensions to give diplomacy a chance to work once again. In this respect, we very much welcome the position of the new US government of President Barack Obama, under which certain principles must apply to all countries in the region. And we are not just talking about the Iranian nuclear issue, but an entire range of problems in the Middle East. Turkey is assuming an important responsibility in this regard, because we enjoy the trust of all governments in the region, including the Iranian government.

SPIEGEL: The fact that you are on such good terms with Iran has another of your good friends worried: Israel. Could the Turkish-Iranian rapprochement come at the cost of the partnership with Israel?

Davutoglu: Rapprochement would mean that we had bad relations. No, Turkish-Iranian relations have long been good and stable. We want to have an untroubled relationship with all neighbors, which is precisely what we have achieved. Our relationship with Syria, which was troubled for decades, is now excellent. We are now on very good terms with Greece. We have invited all of the region's leaders to Ankara, including Iranian President Ahmadinejad, Israeli President Shimon Peres and former Israeli Prime Minister Ehud Olmert

'We Have Consistently Rejected the Expression 'Axis of Evil'

Davutoglu: It is true that Turkish foreign policy is based on our intent not to polarize, but to reconcile the various interests in our region. It is always dangerous to play off groups or countries against one another. That's why we have consistently rejected the expression "axis of evil."

SPIEGEL: Nevertheless, not all countries are equally willing to cooperate.

Davutoglu: We see no radicals or moderates in our neighborhood. All we see are neighbors. Which is why Turkey cultivates relations equally with Israel and Palestine, Egypt and Iran, Fatah and Hamas, the Lebanese Hezbollah and the coalition that invokes murdered former Prime Minister Rafik Hariri. Do you know who sent me congratulatory messages last year when Turkey beat Croatia in the European football championship? An Israeli, a Palestinian and a Lebanese! We simply do not believe in polarization or isolation. We believe that problems can be solved in a dialogue. Turkey doesn't want chaos in the Middle East. It wants order.

SPIEGEL: Does that mean that your country is seeking to become a peacekeeping power in the region once again? Is this what your fellow Turks refer to as neo-Ottomanism?

Davutoglu: If the term relates to stability and order, I have no problem with it. But if you are talking about Turkey assuming an imperial, dominant position, the answer is no. We do not want to dominate the region. All we want to do is contribute to making it safer and more stable.

SPIEGEL: The Europeans value Turkey's new role as an intermediary in the region. Nevertheless, the reception of Hamas sparked a hailstorm of criticism -- from all sides.

Davutoglu: There is something here that we should not forget. The decision to allow Hamas to participate in the elections in December 2006 wasn't made in Ankara. However, observers concluded that those elections were free and fair, perhaps even the fairest elections in the Arab world. I'm afraid that the West lost some credibility when it marginalized the election winners in the Gaza Strip. Our position, by contrast, is to involve Hamas in a dialogue. Today, three years later, many admit that we were right. In fact, perhaps the Lebanon and Gaza wars could have been prevented if Hamas had not been backed into a corner.

SPIEGEL: With all this attention being paid to the Arab world and Central Asia, have you already turned your backs on Europe?

Davutoglu: No. Turkey's accession to the European Union is and remains our most important strategic goal. This isn't just a matter of our foreign policy, but it also has to do with our history. We have oriented ourselves toward Europe since the middle of the 19th century, since Ottoman reform policies. However, we are not just a European country, but an Asian, Mediterranean, Caucasus, Black Sea and Middle Eastern country. We are multidimensional. But this isn't a problem for Europe. On the contrary: It helps the EU when we, as a democratic, secular country, bring order to the region.

SPIEGEL: Nevertheless, two of the biggest member states, Germany and France, want to offer Turkey nothing more than a privileged partnership.

Davutoglu: I spoke with Foreign Minister Frank-Walter Steinmeier, and I am very confident -- also about the German position. Let's not forget that all member states of the EU officially approved the accession negotiations with Turkey.

SPIEGEL: But that doesn't move things forward. The European Commission is giving Ankara poor marks; there has been little progress on reforms. And the new European Parliament is full of opponents of Turkey.

Davutoglu: We are familiar with the difficulties. Believe me, we appreciate it when the Commission tells us what we still need to work on. We want to do our homework. And as far as the outcome of the European elections is concerned, that's the democratic will of Europeans, which I respect. But I do not believe that it will affect the Turkish accession negotiations.

SPIEGEL: You aren't disappointed that fear of Turks is spreading in Europe once again?

Davutoglu: I don't see it that way. However, I do admit that we have to pay more attention to public opinion in Europe.

SPIEGEL: Mr. Minister, thank you for this interview.