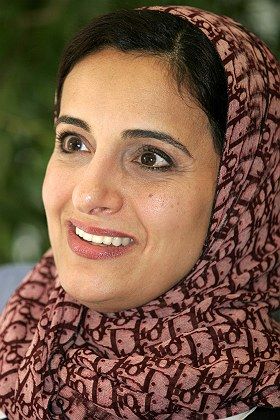 SPIEGEL: Sheikha Lubna, the oil price is over $90, money is overflowing the coffers of the Persian Gulf states, your country recently raised the salaries of civil servants by 70 percent -- have you been able to keep your feet on the ground or have you already lost touch with reality?

Lubna: Dont worry, were on steady ground. As far as the 70-percent salary increase for our civil servants goes, we simply had to keep up with inflation

SPIEGEL: which is 9 percent.

Lubna: Yes, but the salaries in the private economy have risen so rapidly that we are in danger of losing our best people.

SPIEGEL: Other Arab governments would love to have such problems.

Lubna: Its true we are doing well at the moment. Our economy grew last year by 9 percent and whats particularly rewarding is that 62.5 percent of our gross national product no longer comes from oil production. We suffered greatly when the oil prices were so low in the 1980s and so we developed our own know-how which we today export: tourism, logistics, aerospace and airport management. All together that in turn brings back foreign investment -- $12.5 billion last year. Believe me, this capital wouldnt have appeared had we not worked in a very disciplined fashion over the last 20 years.

SPIEGEL: How can you be certain that the economic boom will continue?

Lubna: Weve learned very quickly. Look at our younger people  they speak Arabic and English, know their way around the Internet, are confident. We call them knowledge workers. Then theres our infrastructure: motorways, ports, airports, our free-trade zones, where 50 percent of the imports are re-exported. Much has been accomplished in a short time. And finally the economic conditions, our transparent legislation, our dependability, our competitiveness. If Ireland can be a success story without oil reserves why cant we do it?

SPIEGEL: What has the boom in the Gulf meant for the Arab world so far?

Lubna: Women as economics ministers for example! Im not here for decoration. I stand for something -- for growth, for a solid market economy, that things are done properly. Thats what weve given the region: know-how.

SPIEGEL: And women benefit more from that than men?

Lubna: They will at least be judged according to their ability and not their gender. Our leadership has a very relaxed, very self-confident attitude toward women.

SPIEGEL: Change yourself or youll be changed, Dubai's Sheikh Mohammed warned the Arab world not long ago. What did he mean by that?

Lubna: He wanted to call for leadership in the age of globalization -- take risks, be an example, have an influence with the younger generation. Whoever doesnt do that will wash away progress like a tsunami. For example, I came to Sheikh Mohammed's attention because I managed our ports and an Internet platform well. When I was made minister he called me and said: Congratulations, I have more work for you.

SPIEGEL: Since then youve been on the move as a traveling salesperson for the economy of the Emirates. Which trip has been the most successful?

Lubna: That would be my US trips following Dubais failure to take over six big American ports. I traveled there in order to tear down stereotypes and to learn from the mistakes we made --which we did. We thoroughly changed our image in the US -- they now know that we are, excluding oil trading, their most important trading partner in the Arab world.

SPIEGEL: And what role does Europe have to play?

Lubna: The Europeans are our oldest and as a block our largest partners.

SPIEGEL: German Chancellor Angela Merkel is worried that foreign state-owned investment funds are targeting key industries. Abu Dhabi has the largest of these types of funds with $875 billion.

Lubna: The national funds of the Gulf states are some of the most established that there are. Theyve helped stabilize the economy, reduce deficits, and create jobs in the US, Europe and in the Far East. We are in high demand as investors. And without specifically addressing Germany -- whoever chooses to face the competition without these investments will end up losing out. Because this money will simply go somewhere else.

SPIEGEL: There are persistent rumors that the Gulf States would like to work together with Israel economically.

Lubna: First the Middle East problem has to be solved and there must be two sovereign and equal states. Politics has priority here, the economy comes second.

SPIEGEL: You once worked for a software company that had an Indian boss

Lubna: Thats right, and I still call him boss whenever I see him, which pleases him greatly. I was the only woman, the only Arab, and the only princess at his firm. I earned a thousand dollars a month -- and he taught me what discipline is. One time there was a problem with the bookkeeping software. Ill take care of it tomorrow, I told my boss. No, he answered, youll do it today. There are 2,000 people waiting for their wages.

SPIEGEL: Thats the way it is for many foreign workers in your country -- they work hard and often have to wait for months to be paid.

Lubna: The foreign bookkeepers, engineers and service personnel in the Emirates earn well -- otherwise they would have left long ago. But the construction workers that you mention, it took a while for us to recognize the problems. Many of them came in a very short period of time. Some employers have treated them unfairly. Of course, there have always been laws to protect these workers, but the laws were not always properly enforced.

Now there are draconian penalties for exploitative employers and we are revamping our justice system at great speed. But we dont want to beat around the bush -- there are grievances and we cannot afford these grievances. Eighty percent of our population consists of foreigners who are helping us build up our country. We are dependent on our workers.