SPIEGEL: When President Obama recently declared his support for gay marriage, there was an outcry within the black community. Some black pastors, amongst them pastors from the Baptist Convention, heavily criticized Obama. You took a strong stance in defense of the president's decision and wrote a letter criticizing the black pastors that had attacked Obama. What made you take a stand?

SPIEGEL: Is there anything in scripture that guided you to supporting gay marriage?

Moss: "For God so loved the world that he gave his one and only Son, that whoever believes in him shall not perish." (Editor's note: John 3:16)

SPIEGEL: What kind of a reaction did your letter evoke from your community and from other pastors?

Moss: Extreme support from the church. I've been flooded with letters, saying things like: "We are proud of you. Thank you for articulating what I could not articulate." My primary job was to give people language, so that when they are approached by people, they could say that there is a different spelling between "rights" and "rites" -- in other words, civic legislators and ecclesiastical councils have different responsibilities -- and that it is not same-gender relationships that are destroying marriage. What is actually destroying marriage is high unemployment, incarceration, a lack of education and ministers living in contradiction where they speak about holiness on one side but yet are living in adultery on the other.

SPIEGEL: How much does religion influence the black vote?

Moss: I think it has an influence. Ever since the civil rights movement, the black church has always encouraged people to utilize their voting right, which is a right that was fought for. And the primary statement that Jesus makes is that the spirit has to preach the good news to the poor. So that statement has always resonated within the hearts of the black church to say that we are called to speak up for the poor, for those who are oppressed.

SPIEGEL: But now they have an issue with gay marriage. If religion and the teachings of the Bible are so important to blacks, why don't they vote Republican more often?

Moss: Part of the reason is that there are really only two positions the Republican Party has taken that the more conservative clergy have picked up, those being the issues of gay marriage and abortion. But when you look at the Republican agenda, it's an agenda that is anti-education, anti-union, anti-environment, anti-prison reform and anti-economic reform. Many people are very sophisticated, and they say, "Well, wait a minute. You want us to focus on very personal issues, whether someone receives an abortion or whether someone chooses to get married, which has no effect on someone economically. It has no effect on the school system. It has no effect on the environment." And so many African Americans are saying, "Wait a minute. I know the policies of the Republican Party affect my school system. They affect my job. They affect the environment. They affect the corporations that are allowed to literally get away with robbery." These other issues of abortion and gay marriage pale in comparison to what Enron did in wiping out thousands of jobs or what Wall Street did in putting 50 million people out of work.

SPIEGEL: Given the fact that so many African Americans are still struggling economically, how is it possible that the largest outcry in the black community thus far in Obama's four years in office was in response to this gay marriage issue?

Moss: It wasn't an outcry in the community. It was an outcry among pastors. The congregation didn't have an outcry.

SPIEGEL: But the word of their pastor counts. And there is a reason why you reacted to their criticism so forcefully. What is their problem with gay marriage?

Moss: Many black pastors have been educated in evangelical schools. Their schooling taught them that you have to stand up against this particular position. The congregations, however, kind of shrugged their shoulders and said, "We're going to go out there and support. Why are you taking that position?" Many people in the pews are saying, "Wait a minute. I have a child who is gay. I know someone who died of HIV, which has ravaged our community," and so you have a greater sophistication in the pew than you do in the pulpit.

SPIEGEL: Blacks appear to have a bigger problem with homosexuality than white Americans. Why?

Moss: I know that there's some homophobia within our community, but there's some strong homophobia throughout the whole of American society as well, particularly throughout the South to a degree, whether white or black. And since many of us migrated from the South, that could be a strong connection along those lines, but I don't have any scholarship to support that. But I would not say that we are necessarily more homophobic than any other community. I think that questions about the survival of the black community come about because of the context in America where we are constantly vocal about things such as fatherhood, about reproduction, about the continuation of the community. It becomes very sensitive because of the historical context.

'Choosing Not to Vote Spits in the Face of Our Ancestors'

SPIEGEL: I came across an interesting point made by a black writer. He writes: "We've been taught the institution of slavery stripped us of our manhood, and we have to maintain what's left." Do you agree?

Moss: I don't necessarily know if you should make the equation of heterosexuality as man or more man. I wouldn't make that claim, but I think that there are some of those myths that continue to perpetuate. There has never really been a real dialog, but you've got to understand that this conversation and the outcry is something that is more recent than in the 1940s, 1950s and 1960s to a degree. There was a "don't ask, don't tell" policy in many Southern communities, and that shifted in the 1970s and 1980s, to say that we want to root out certain people -- again, because you had more pastors that were then going to these schools that were very conservative. And so they were taught that you have to stand in the pulpit and preach condemnation to root out a certain group that's in your congregation. But people who are much older, in their 80s and 90s, say, "Well, there have always been people who have had different orientations in the church. In our community it wasn't unusual, and they were part of the community, and we didn't make any overtures to throw them out of the community."

SPIEGEL: Why can't some in the black community relate to the struggle of homosexuals, a struggle for acceptance that they themselves have had to fight?

Moss: I think you see the pastors taking that position. It is very male dominated. You don't have as many mothers who are pastors, and mothers take a very different position and say, "I may not necessarily agree with everything my child does, but I love my child nonetheless." Male perspective does not flow in the same direction, and since many of our churches have a strong number of women and strong number of mothers, there's a different position, saying it's very difficult for you to speak out against your child, someone that's in your family. You can have an argument with them, but you can't condemn them. You can't cast them out, because God has not done that to us. We cannot do that to anybody else.

SPIEGEL: How much do you think the stance the president took will change attitudes towards gay marriage within the black community?

Moss: The polling is showing that there is a discussion raising the contradictions: Why are you raising this issue, but you haven't said a thing about this other issue? Why are you outraged about this particular issue? Just as when there was outrage when black and white people were married, it's personal. These issues have nothing to do with economic parity between differing groups. It has nothing to do with desegregating the school system and making sure that everything is equal. It's purely a private decision. No minister in the United States will ever be forced to marry anybody that they don't want to. So why would you be upset about the fact? It's a silly argument.

SPIEGEL: Why aren't the same strict religious beliefs that guide the current debate on homosexuality applied in daily life, for example, children out of wedlock, single parent homes?

Moss: I think you hit the contradiction on that one. There's one aspect of drawing on the kind of Catholic tradition of the hierarchy of sin that we have borrowed. Second is that there's a contradiction in this condemnation where people want to condemn one group but yet are silent about adultery and economic injustice. I call it "selective outrage" -- that we want to be outraged about this, but no one wants to stand up to talk about how we can improve the community, for example through economic development, or how we can improve our schools. All of these things are interconnected, and they are things that the Bible calls on us to do.

SPIEGEL: Do the pastors who are now railing against gay marriage feel as strongly about these other issues?

Moss: Most pastors that made the outcry have never cried out on racism, any type of injustice or police brutality. They've never once made a statement about health care. Many of them are silent on community issues. They are very silent, but they have now become the leaders of this particular movement. With those who have been very involved in the community, although their views may differ from the president, they say: "Well, I have a different perspective than the president, but I support the president, because he's president for everybody." Just as I will fight to the death for one's right to be able to practice in their temple, their mosque, or in their church, even if they have a different belief than I do.

SPIEGEL: Do you think that the discussion about gay marriage will increase awareness of all the other threats to marriage which we've been discussing?

SPIEGEL: How concerned are you that blacks will choose not to vote?

Moss: I'm still very concerned about that, but I think the tide is shifting. The energy around this is waning, and people recognize that we have clear choices if we are to make shifts in our country. But not voting, to me, is one of the worst things that could happen in our community. You can vote for whoever you want to, but choosing not to vote spits in the face of our ancestors who fought for our right to vote.

SPIEGEL: Aren't you concerned that Trinity will once again be a political target?

Moss: Not at all. 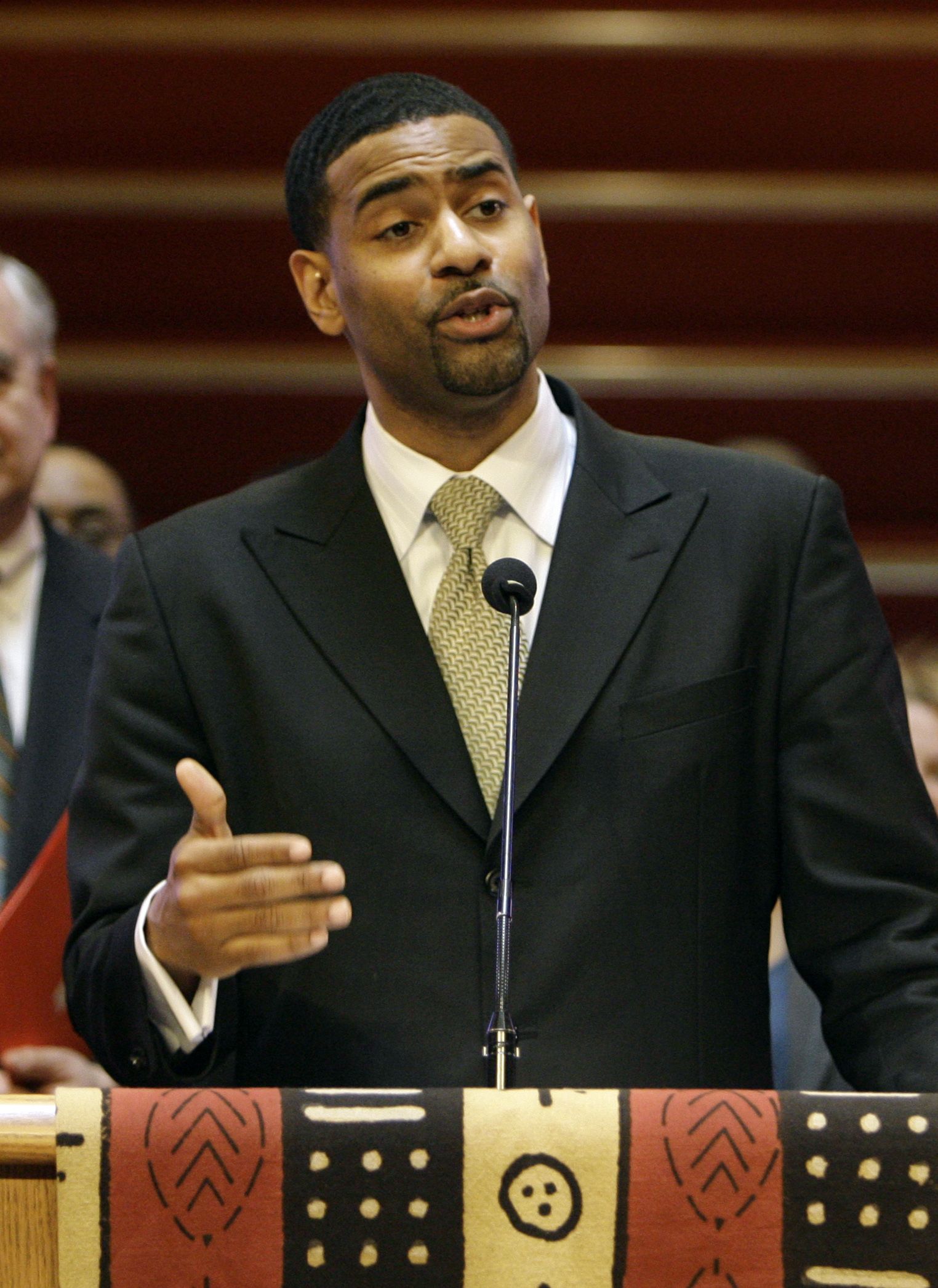