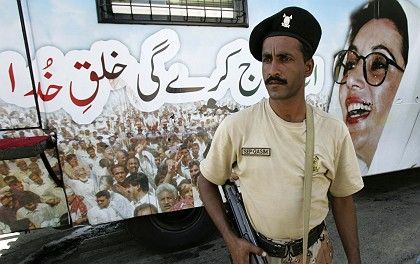 A soldier from Pakistan's para-military force stands in front of one of Benazir Bhutto's vehicles after the bomb explosion in Karachi.

SPIEGEL ONLINE: Mr. Rashid, before Benazir Bhutto returned to Pakistan, Islamic terrorists threatened to carry out attacks. Now those threats have become a bloody reality. Even Pakistani President Pervez Musharraf had asked Bhutto to postpone her trip. Did the opposition leader really have to come back into the country now?

Rashid: Bhutto considered it necessary to send a political signal with her return. After nine years abroad, she couldn't return on the quiet; she had to put on a big parade.

SPIEGEL ONLINE: Nevertheless, it must have been clear to her that her triumphal procession involved a high degree of risk.

SPIEGEL ONLINE: Musharraf blames the bombing on radical Islamists. Bhutto's husband blames Pakistan's intelligence service. Who is behind it?

Rashid: That is still unclear. But there is speculation that the attack was not carried out by Islamists, but by certain groups within the regime who don't want Bhutto in the country. The leaders of Bhutto's Pakistan People's Party are accusing the government and the intelligence services of not having done enough to prevent the attack.

SPIEGEL ONLINE: Do you agree with them?

Rashid: I really wonder why the government didn't do more in terms of providing security during Bhutto's return. The fact is that the security forces' presence was very small.

SPIEGEL ONLINE: It's been reported that 20,000 men were deployed to protect Bhutto. 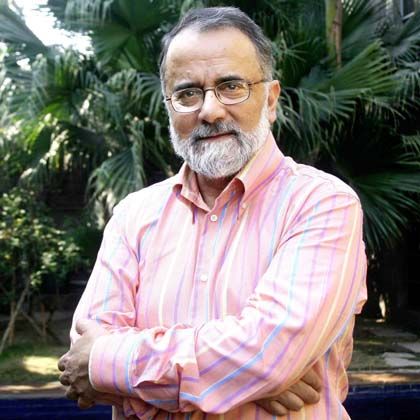 Ahmed Rashid is a Lahore-based journalist.

Rashid: That's the big question now: Will the army abide by the results of an election? After this attack, there surely won't be any election campaign. The public will avoid political events, so there won't be enough discussion about important topics. Even if there is an election, it'll only be partially meaningful.

SPIEGEL ONLINE: Should the elections be postponed?

Rashid: The elections should definitely be held. If they're cancelled, it'll only worsen the crisis.

SPIEGEL ONLINE: What does Musharraf have to do to keep things in the country from escalating?

Rashid: He has to win the trust of the opposition, something he hasn't yet been able to do. He's still acting like a military dictator. He acts like he's holding all the cards, even when that's not the case. He's extremely unpopular. He needs to reach out to the opposition and engineer some sort of national reconciliation. Politicians in exile like Sharif should be allowed back.

SPIEGEL ONLINE: What does the attack mean for the country's further development? Will democratic organizations be bombed out of the country?

Rashid: I don't think so. Naturally people are shocked right now. But they'll want to have an election, because they want democracy. They want an end to military rule.