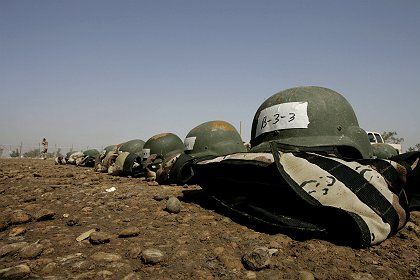 The US is hoping the Iraqi military might be able to take over soon. Stephen Biddle isn't so sure.

SPIEGEL ONLINE: Mr. Biddle, you just returned from a four week stay in Baghdad where you had been asked to advise General Petraeus, the commander of American forces in Iraq. Did you come back with a sense that he has a workable idea on how to improve the situation in Iraq?

Stephen Biddle: I am very impressed with the general's ability. I think he is an extremely able public servant. If anyone is able to make the best of this, it's him.

SPIEGEL ONLINE: General Petraeus is known to be an expert in counter insurgency. In fact the entire administration seems to think that this should be the focus. You on the other hand have argued that counter insurgency is not what is needed in Iraq. Why?

Biddle: A classical ideological insurgency is a war of ideas in which a sub-national group is challenging the ideas by which the government runs the country. In this kind of war of ideas, you can in principle win by changing people's ideas. Given that, the classical strategy for waging counter insurgency is oriented around winning hearts and minds. You engage in a process of political reform in which you introduce democracy to make the government's ideas legitimate. You engage in a campaign of economic development assistance. And you try and train an indigenous military to wage the war. All those strategies are what the Bush Administration's approach to Iraq has been. They make some sense, if the problem you are trying to solve is a classical ideological insurgency. Except, Iraq is not.

SPIEGEL ONLINE: What is then?

Biddle: It's a communal civil war in which the war is not fought over a set of ideas. Rather, it is about the survival and self interest of communal groups within the nominal state. Sunnis are not fighting for an idea of what's best for all Iraqis; they are not trying to persuade Shiites that a Sunni government would be good for them. They are fighting for the self interest of Sunnis against the self interest of Shiites -- and vice versa. Because it is not a war of ideas you cannot expect to win it by changing people's minds. It's a war of identity. Identities can't change in the way minds can.

SPIEGEL ONLINE: So the oft-quoted aim of fighting for the hearts and minds of Iraqis is futile?

Biddle: It's not going to solve the problem. That's not to say we shouldn't help the Iraqis economically. On moral grounds, we owe it to them.

SPIEGEL ONLINE: Where in this equation do the Jihadists come in -- those who are not Iraqis and who are in fact fighting for ideas?

Biddle: It's a complex conflict. As far as al-Qaida in Iraq is concerned I think they are a symptom rather than a cause. If Iraqi Sunnis at large decided tomorrow that al-Qaida is contrary to their interests, they would cease to offer to al-Qaida the safe houses, the infrastructure and the financial support that al-Qaida needs.

SPIEGEL ONLINE: Your argument that we are seeing a communal civil war in Iraq would be more convincing if there weren't dozens of groups attacking the US military every day. How does this fit in?

Biddle: Certainly the Sunnis are mainly fighting the coalition because they think the Americans are aligned with the Shiites.

SPIEGEL ONLINE: Are you saying that there is no anti-occupation struggle in Iraq?

SPIEGEL ONLINE: Assuming you are right that the US should not be approaching Iraq with a counter-insurgency mindset, what should the Americans' strategy be?

Biddle: The standard playbook for terminating a communal civil war has two pieces to it. The first is to negotiate a power-sharing deal between the sides that leads to a cease-fire. The second is to bring in outsiders to police this agreement. You cannot rely on indigenous military forces because the locals don't trust each other. We've got problems with both pieces. With respect to the power sharing compromise, the problem is that the stakes for each side are literally existential. They are afraid that if the other side gets control of the state the result might be genocide. The kind of compromise the playbook calls for by definition implies ceding power -- thus compromising with people who you think are threatening you with genocide. If you miscalculate and give up too much power, the result is extermination. So the downside risk is cosmic. By contrast, refusing to compromise means to have an ongoing, chronic low level bloodletting, which isn't great -- but probably looks a lot better than genocide. So we have a recipe for stalemate.

SPIEGEL ONLINE: Can outsiders be helpful in trying to break this stalemate?

Biddle: A compromise can only be created by outsiders using coercive leverage to drive all sides towards a deal nobody wants to make. But we are radically short of leverage. Economic aide, for example, isn't remotely close to enough. There are only two prospects: One is regional diplomacy along the lines of talking to all Iraq's neighbors and hoping that they have more influence over their clients in Iraq than we have. But there are reasons to be skeptical about that. The other is military power. We have 160,000 heavily armed troops in Iraq. That is not enough to pacify the country. But it is enough to create powerful carrots and sticks -- that is, to reward Iraqi factions who are willing to agree to a cease-fire and to punish those who are not. If we start using our military force in a selective, discriminating way, that may help.

SPIEGEL ONLINE: Were Iraqis to agree to a cease-fire deal, who would police it? Clearly neither the United Nations nor the Arab League are keen to enter Iraq.

Biddle:The only plausible candidate is the US military. The US is unpopular with everybody in Iraq. On the other hand the US is the only party to the conflict that is not viewed as posing a threat of genocide by anyone. If we were to play our cards well, I don't see why we couldn't play this role. The main barrier is the American electorate. Both sides in the American debate are arguing that if we just do things the way we want, we will bring all the troops home soon. And that's irresponsible.

SPIEGEL ONLINE: You see the US needing to stay in Iraq for the foreseeable future?

Biddle: I am arguing that if we are serious about succeeding in Iraq, the only way you're going to terminate the civil war is by staying to police it. If you argue, as the administration is now doing, that it is terribly important we succeed in Iraq, but that we will bring home everyone as soon as that is accomplished, you're guaranteeing that everything you accomplish will fail within month of departure.

SPIEGEL ONLINE: The US administration has said that if all goes well, American forces will be able to leave soon and turn things over to a well-trained Iraqi army.

Biddle: By relying on the National Iraqi Army, all you do is provide one of the two sides with a massive casus belli. The Sunnis will take up arms the minute you depart. We think the Iraqi Army is a neutral institution that defends all Iraqis equally. Sunnis think it is a Shiite militia on steroids.

Stephen D. Biddle is currently a fellow at the American Academy in Berlin.