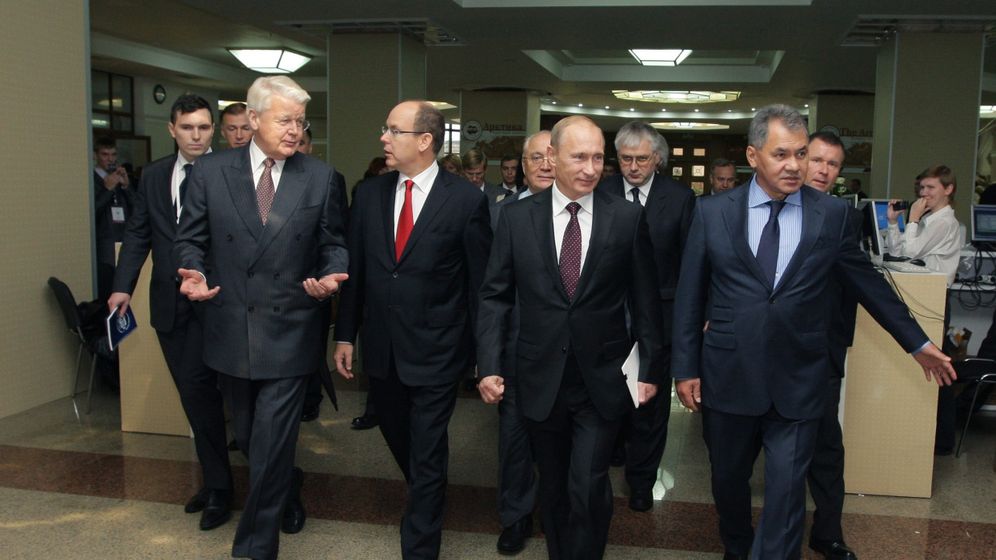 Russian Prime Minister Vladimir Putin loves to travel. And he seems to have a particular soft spot for the Arctic. In April, Putin helped researchers attach a radio transmitter to a sedated polar bear while in August, Putin paid a visit to Russian and German scientists at the research station on Samoilovsky Island in Russia's remote northeast.

The latter trip seems to have made a lasting impression -- so much so that he even felt compelled to mention it during a speech he delivered Thursday at the international Arctic conference held in Moscow. Permafrost and climate change experts at the research station in northern Siberia, Putin said, must battle "very trying conditions" but "their love of science" ensure that "they don't even seem to notice." Given their sacrifice, he went on, he wants to do everything he can to help spruce up their dilapidated station in the enormous Lena River delta.

But there is more to do in Russia's north than just renovate researchers' quarters. Putin said that, after years of delay, it is finally time to begin large-scale efforts to clean up the dirty legacy of the Soviet Union. "We will put huge amounts of money into environmental protection," Putin pledged grandly before conference attendees. "We are planning to do a serious spring-cleaning of our Arctic territories," he went on, and spoke of "garbage that (has) been accumulating for decades" there.

Nowhere, is the Arctic as populated as it is in Russia. And nowhere is there as much industrial activity -- and resulting pollution. The worst sites are well known. Like, for example, the double island of Novaya Zemlya which was used for a total of 130 atomic weapons tests between 1955 and 1990. In addition, reactors from Soviet-era nuclear submarines were simply scuttled in the Barents Sea and Kara Sea. And then there are the more than 100,000 fuel barrels that the military has left to rot away on the islands of the Franz Josef Land archipelago.

Working Without All the Facts

But in addition to the largest sites, there are the numerous mini-environmental transgressions in the numerous Arctic settlements that have been severely neglected or fallen into disrepair since the end of the Soviet Union. Among them are the radioactive beacons that were part of the now defunct navigational system that once helped ships find their way along the country's northern coast.

Already, there are some projects underway aimed at cleaning up environmental hotspots, such as that focused pollution associated with nickel smelters on the Kola Peninsula. But for the moment, officials don't even have a clear overview of what needs to be done. Before the year is up, though, Emergencies Minister Sergei Shoigu plans to put together an atlas of environmental hazards based upon the preliminary work of environmentalists.

The challenges are immense. Roughly a million Russians have their homes within the Arctic Circle and more than a tenth of the country's economic output is generated there. Environmental problems are practically unavoidable. Even Putin admits that the development of the Far North hasn't always been well-thought-out and done in a way that made economic sense. "We will remember these lessons," he said, "and take them into consideration when drafting long-term plans for the development of the Russian Arctic."

It remains to be seen just what such a plan might look like. According to a polar action plan Russia's government decided upon last year, the Arctic is to become the country's most important source of raw materials by 2020. At this week's Arctic forum in Moscow, Russian government officials made a point of emphasizing that the raw materials would only be extracted in accordance with the highest environmental standards.

Will such promises be kept? Will the ambitious cleanup projects actually be launched? It is hard to say. But Moscow is preparing to designate some new protected areas, saving them from ruthless assault and further pollution. In all, the plan involves roughly 5 percent of the territory in the Russian Far North, including a 1.5-million-hectare (3.7-million-acre) "Russian Arctic" national part on Novaya Zemlya. What's more, Putin announced that government officials in Moscow and Washington are in talks to establish a jointly owned park that could stretch from the eastern extremities of Russia to Alaska.

As Putin told his guests at the conference: "An irresponsible attitude toward the Arctic could spell global problems, rather than global advantages, in the near future."