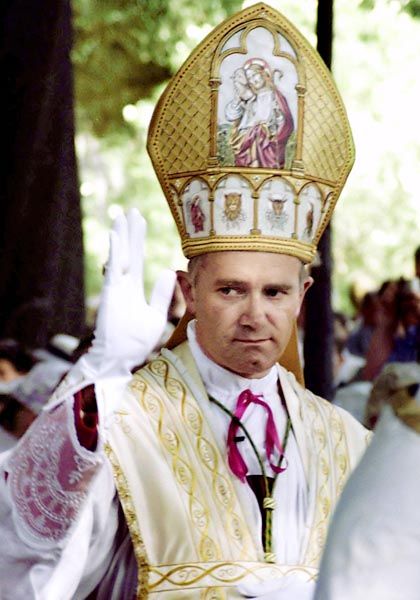 SPIEGEL: Bishop, weeks ago you gave your colleague Richard Williamson a book so that he can read up on the Holocaust. Last week he published an apology which falls short of the Vatican's demand that he retract his Holocaust denial. Does Williamson's statement suffice in your opinion?

SPIEGEL: That hope seems unfounded. After his arrival in London, Williamson surrounded himself with people who have openly denied the Holocaust, such as the historian David Irving. Do you know why?

Fellay: I have the impression that Bishop Williamson is being used by these people. Information was deliberately fed to the media here. We're working against that as well as we can. I am totally against these connections.

SPIEGEL: But your influence on Williamson seems to be weak.

Fellay: We are in contact, he is in a priory of the society in London for the time being. But he is also a free human being. Sure, he has a superior, but he is free in his decisions. But he has to bear the consequences for that.

SPIEGEL: Will he return to his full duties?

Fellay: That is impossible under the current circumstances. He has damaged us and hurt our reputation. We have very clearly distanced ourselves. He was not ordained as a bishop for his own personal purpose but for the common good of the church, to spread the revealed truth.

SPIEGEL: So why don't you exclude Williamson from the society?

Fellay: That will happen if he denies the Holocaust again. It is probably better for everyone if he stays quiet and stays in a corner somewhere. I want him to disappear from the public eye for a good while.

SPIEGEL: The Vatican could reinstate the excommunication because he has not made a retraction.

Fellay: I doubt that. Denial of the Holocaust, as serious as it is, isn't part of Canon Law -- so an excommunication isn't possible. It isn't just we who say that, it is canons, legal experts. The problem is that his comments have been linked to his office.

SPIEGEL: Regensburg's Bishop Gerhard Ludwig Müller has denied the German Pius seminary in Zaitzkofen permission to ordain more priests. Will you adhere to the ban?

Fellay: That was unnecessary and inappropriate. All these events definitely are a setback for us. It throws us back by 10 years. But ordinations will continue to happen.

SPIEGEL: In Germany politicians fear that schools run by the society don't share the values of the German constitution. Are you concerned that there will be inspections?

Fellay: I'm not worried about that at all. We are normal people. We observe the rules, and that includes the state order. Even if one voice said something wrong. It is expressly written in the epistles of the Saint Paul that we honor authority and pray for it.

SPIEGEL: So Williamson is someone who has gone astray and criticism of the society is a big misunderstanding?

Fellay: Now we're the world's scapegoat, and every wrong step immediately turns into a scandal. But mistakes that need to be corrected are made all the time and everywhere.

SPIEGEL: Why did you respond so late to Williamson's crude theses?

Fellay: I confess that I didn't take the situation seriously enough.