The fall of dictators is not always a cause for joy, my colleague Christiane Hoffmann wrote in an essay published yesterday on SPIEGEL International. If the citizens of a country were to have the option of choosing between a "functional dictatorship and the chaos of a failing or failed state," she argued, the dictatorship would often be the "lesser evil" because it promises continued stability.

It's a seductive thesis that has gained renewed traction since the outbreak of civil war in Syria. The Arab Spring unleased exaggerated hope for Middle East democratization -- and now that idealists have been disappointed almost everywhere, the proponents of so-called realpolitik are once again arguing that, although their message of stability may sound unsympathetic and maybe even cynical, it's realistic. But is it really?

Some citizens or members of the international community may understandably want to reminisce about the intermittently prevailing sense of order that existed under a toppled dictator, as gruesome as the leader might have been. But it is also an optical illusion. The mistake lies in even describing a dictatorship as stable: If the dictatorships of Hosni Mubarak in Egypt, Moammar Gadhafi in Libya or Zine el-Abidine Ben Ali in Tunisia had been stable, they wouldn't have collapsed.

Despite what some may think, the trajectory of the Arab uprisings does not support the argument that dictatorship is a better alternative to chaos. It tells the story of authoritarian regimes that were in part propped up by the West for decades -- using exactly this argument -- and then ultimately fell apart surprisingly quickly. Their foundations had been eaten away by youth unemployment, economic problems or state-instituted degradations.

These regimes had long been rotten at their core. They came to an end because of their inner contradictions and inability to satisfy the basic needs of their citizens. Those needs weren't necessarily freedom of expression and democracy, which are often secondary, but work, food and a dignified existence.

The question is not whether democracy is fundamentally, morally preferable to dictatorship -- nobody is seriously questioning that. But even from the perspective of realpolitik, it is erroneous to argue that dictatorships and stability go hand in hand.

Functioning democracies are, in the long term, usually more stable than dictatorships. Dictatorships only appear stable if they are highly repressive or able to provide prosperity to a broad swath of their population.

But dictatorial rule is fundamentally precarious, which is why it must be upheld by force. They usually create the conditions leading to their own collapse, ultimately falling apart as a result of their dearth of social legitimacy. That's another reason why the belief that a "functional dictatorship" is "more tolerable" than chaos, is misleading. The states where chaos emerged and state structures dissolved didn't have a "functional dictatorship," whatever that may mean, in the first place. Dictatorship often merely creates the conditions for later chaos. How absurd is it to wish for the return of a system that was responsible for the instability in the first place?

The only response dictatorships tend to have for popular discontent, social tension or ethnic conflict is repression. The rigidity of these systems of rule makes them unable to smooth out conflicts within society, which means that, although social or political conflicts can be repressed for lengthy periods of times, these problems have the capacity to destabilize the entire state in the long term.

There is no such thing as a benevolent dictator. In authoritarian systems, the regime, military and economy usually combine to form a power-clique that, in turn, fosters cronyism and corruption. If nothing else, these Mafia-like conditions among the leadership are what lead many citizens to revolt. Even in supposedly well-functioning China, these side-effects represent an inside threat to the Communist Party's system of rule.

Inside vs. Outside Regime Change

Once the regime comes to an end, chaos usually follows. That, though, has nothing to do with democracy as such, it is merely a statement of logic. Stability is clearly and fundamentally better than instability, but the crucial question is how that stability can be created. It can't be created by the West bombing dictatorships out of existence, as we've learned since the disastrous 2003 Iraq War -- an attempt to impose democracy from the outside. Nor can, as the Arab Spring showed, stability be fostered by supporting dictatorial regimes. The Arab Spring also demonstrated that the decisions about the fate of a country aren't made by the West, but within the countries themselves.

In this discussion, it's important to make the distinction between "regime change" from the inside and from the outside. It is now by-and-large undisputed that the United States' decision to topple Saddam Hussein was a mistake. But there is no comparison here to the Arab uprisings, in which the regimes were destabilized from the inside and toppled by their own people.

The West weren't the ones that deposed Ben Ali and Mubarak. Nor was it responsible for the revolts in Libya and Syria. In Tunisia and Egypt the United States and France even tried to prop up the dictators at first. The West only intervened in Libya when Gadhafi threated to commit mass murder in Benghazi. And while the West has pushed for Assad to step down in Syria, it hasn't yet tried to overthrow him.

Interestingly, the world's current instability tends to stem from countries that were ruled by authoritarian regimes for decades or are still governed by them today.

The Islamist terrorism that has become the world's current source of concern also emerged because of repression carried out in Western-supported Arab dictatorships. Many of the perpetrators of the September 11 attacks came from Saudi Arabia. The Assad regime's repression also spurred the emergence of jihadist fighters in the early 2000s. Many of the donations that built Syria's Jihadist militias into their current positions of prominence came from citizens of authoritarian states like Saudi Arabia and Qatar. And it's no coincidence that the originator of the second current global crisis is Russia: an authoritarian regime whose aggressive behavior in the Ukrainian crisis also stems from the fact that it is less domestically stable than it seems.

The current crises in the Arab world are not the consequence of naive Western interventionism. On the contrary: Following the invasions of Afghanistan and Iraq, the West appears to have learned its lesson. The US under President Barack Obama has been particularly reluctant to engage in military interventions in recent years. When it does, it is usually to comply with the UN's "Responsibility to Protect" dictum -- and in Syria, it didn't even do that until recently. It is possible to accuse Western governments of inaction in the face of Assad's atrocities. Accusing them of the opposite is absurd.

Who, then, is the target of warnings against the ill-considered toppling of dictators? If it includes the people themselves, those who have risen up against dictators in recent years, the warning appears to be paternalistic: "Think carefully about the chaos you might trigger by overthrowing your dictator."

The people who stormed the Bastille in 1789 and the revolutionaries who ultimately beheaded King Louis XVI certainly didn't entertain such considerations at the time. The French Revolution was also followed by terrible years of terror, then a dictatorship. Six decades would pass before a French democracy would emerge. Would the French, then, have been better advised to skip the revolt?

Revolutions can seldom be controlled externally because their causes are internal. In 18th century France, they were set off by an economic crisis and social tension between the estates. Had there been think tanks producing geopolitical analyses at the time, they likely would have frowned upon the revolution and the beheading of the king and fretted about its consequences for European stability. And it is doubtful that the people of France would have cared.

One country where the toppling of a dictator led to months of chaos, and then another dictatorship is Egypt. For those who favor stability at any price, it may be a desirable outcome. But the case of Egypt is really only effective as a counterexample. Although many Egyptians, in their disappointment with democracy, welcomed the reestablishment of a military dictatorship by General Abd al-Fattah al-Sisi, that move will, at most, buy a bit of time for the regime.

All of the economic and social problems that led to the end of Mubarak's reign persist and could soon lead to renewed protests and violence. The idea proposed in my colleague's essay, that a military putsch against Assad in Syria would pave the way for stability's return, is erroneous -- conflicts that have already erupted cannot be solved by replacing one authoritarian structure with another.

When war broke out in former Yugoslavia in the 1990s, some became nostalgic for the former dictator, Tito, in the belief that he had managed to hold together the multi-ethnic state. But they were just as wrong as those who now say that the confessional conflicts between the Alawis and Shiites on the one side and the Sunnis on the other were defused under Assad. A dictatorship can seemingly freeze these kinds of conflicts for decades, even as they worsen beneath the surface. What was the case in Yugoslavia is now the case in Syria: Like a pressure cooker, when the seal breaks, the steam explodes.

What does that teach us? The idea that dictatorships foster stability is a fairy tale; chaos is often the product of the autocratic systems it follows. People themselves make the decision whether to rise up against dictatorships. The only question for the West is when it should intervene in such a rebellion -- and that cannot be answered in the abstract with pleas in favor of, or in opposition to, dictatorships. It can only be decided on a case-by-case basis.

One nation in particular should know that it takes time to create a functioning democracy -- that it is a learning process, but that even people who have a history of authoritarianism can create democratic stability: The Germans. A country that created history's most appalling dictatorship is now an exemplary democracy. It is hard to find a better rebuttal to the theory that there are cultures ill-suited for democracy. 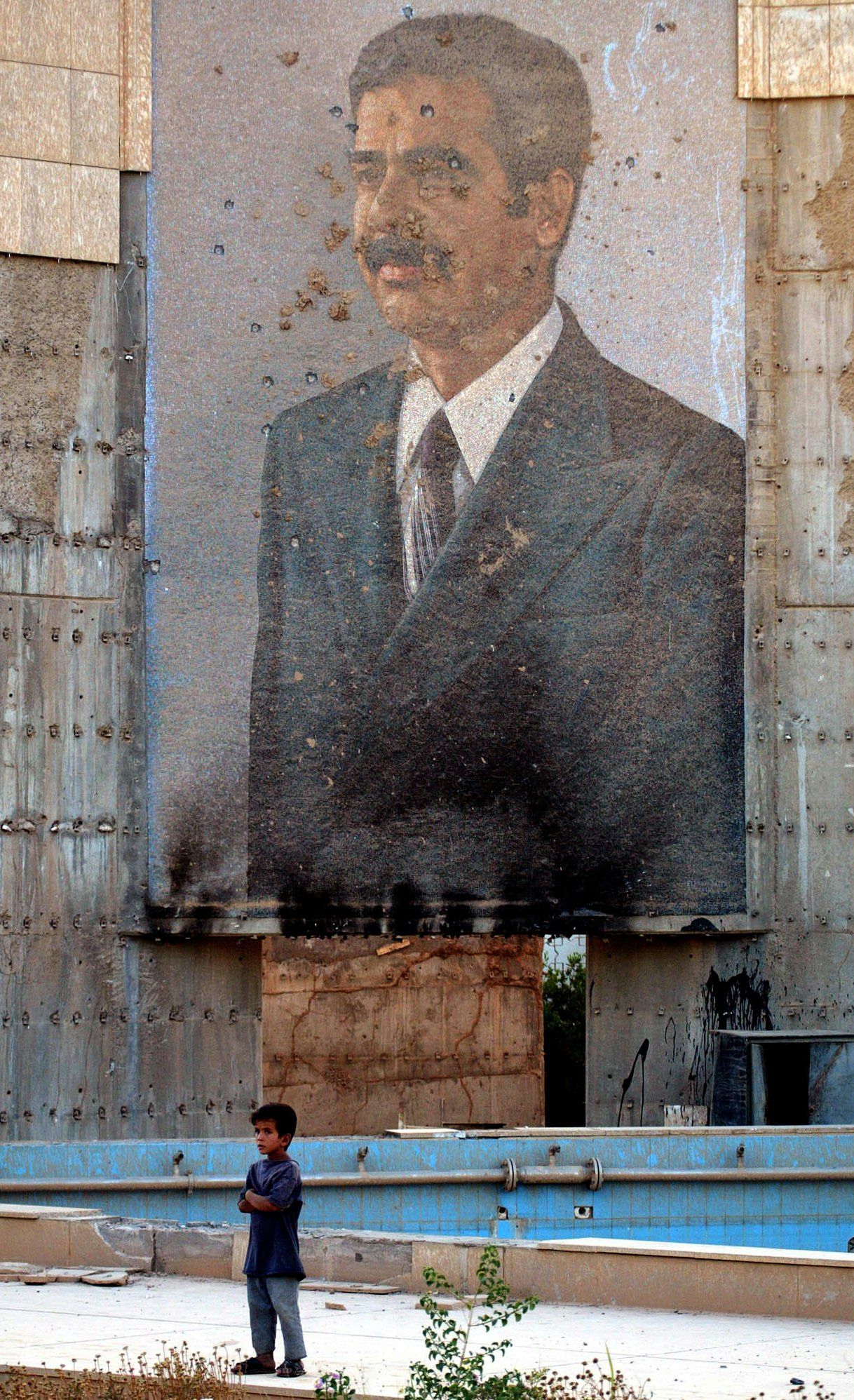 A bullet-riddled portrait of Saddam Hussein in Baghdad, Iraq, in 2003