In Yvo de Boer's mind, it was meant to be simple. "The Americans want the Chinese to do more and the Chinese want the Americans to do more," the UN climate chief said. "So why don't both just do more?" He was talking about reducing CO2 emissions, of course. The goal is to limit global warming to 2 degrees Celsius.

This will require drastic cuts in the use of oil, coal and natural gas. The numbers tell the story: Together, the United States and China are responsible for around 40 percent of global CO2 emissions. A solution in Copenhagen is unimaginable without the participation of both countries. The average volume of CO2 emitted by each person in the US every year is around 20 tons -- four times greater than the per capita amount in China. In overall terms, the absolute amount of CO2 emitted by the Chinese now exceeds that of the United States, but a good deal of the carbon dioxide generated in China comes from products for the US market.

US negotiators like to argue that the Chinese would still cause a rise in global warming even if the United States ceased to emit greenhouse gases. "It is high time for China and America to do a lot more and to put their proposals on the table," European Commission President Jose Manuel Barroso said on Wednesday night. The presumption is that the two countries have opposing interests and that they are pulling in opposite directions.

Neither country, according to this reading, wants its own production to become more expensive, particularly given that some countries will only be required to make relatively small emissions reductions, if any at all. And the tense back and forth between Chinese and American negotiators in Copenhagen fosters the impression of unbridgeable differences. In the run-up to the summit, China spoke little of the world's poorest countries -- but in the final stage of talks, it is now trying to position itself as their champion.

But what if the US and China had more common interests than Yvo de Boer would like to believe?

Viewed from a financial perspective, China and America have become tightly interwoven in recent years. Historian Niall Ferguson and Berlin-based economist Moritz Schularick even dubbed a moniker for the entity: "Chimerica." The two countries' economies are, at the very least, so tightly interconnected that a hiccup for one could become a cough for the other. China provides the US with cheap products and unlimited credit. It's not only America's factory, but also its bank.

In return, the US provides China with consumer demand and interest payments. If China hadn't provided the US with fresh credit after the financial crisis, Washington and New York would have sunk into chaos. And even if hundreds of thousands of American jobs have migrated to China, the US has no interest in anything happening to damage China's rapid economic rise. After all, it would endanger America's own credit supply. Meanwhile, the Chinese have no interest in weakening the US economy by curbing its CO2 emissions in the short-term.

This mutual dependence must necessarily be reflected in climate policy. After all, the Copenhagen summit is more of an economic conference than an environmental one. And short-term prosperity for both China and the US depends on a continued reliance on fossil fuels. It has become apparent that Chimerica, despite the risks presented by global warming, has little interest in shouldering the immense short-term costs associated with an effective climate protection plan. That, after all, would share their prosperity with other nations around the world.

Both countries, despite assurances to the contrary, are light years away from swearing off fossil fuels. The Chinese, like the Americans, fuel their economy primarily with coal and oil -- the US even maintains a gigantic global military infrastructure to defend its access to that oil. No matter how much green rhetoric comes out of Washington and Beijing, fossil fuels remain the foundation of their military-industrial power.

Binding pledges to cut emissions -- which would necessarily mean a reduction in dependence on fossil fuels -- are, according to this logic, also a pledge to reduce one's power. It is a bit like the symbiotic relationship between drug dealers and addicts. The interests of desert countries, island nations and coastal states -- which are acutely threatened by global warming -- are secondary from this perspective. The true constellation that we are seeing in Copenhagen, even if it looks different on the surface, is not China versus America. It is Chimerica against the rest of the world -- G-2 versus G-190.

The two who coined the term Chimerica, Ferguson and Schularick, consider it imperative that this close economic relationship come to an end. According to their analysis, Chimerica contributed heavily to over-consumption in the US and to the financial crisis. The lesson of that crisis, they say, is that Chimerica needs to be dismantled.

This analysis too can be applied to the climate crisis. If Chimerica's global strategy precludes making necessary reductions to CO2 emissions, then it is a model without a future. A toothless agreement in Copenhagen -- or its complete failure -- would be, one hopes, one of Chimerica's last appearances in the leading role on the world stage.

The most intelligent course would be if the two countries would enter into true economic competition for the greenest technologies, the most efficient automobiles and the strongest job growth in the environmental sector. Were this to be adopted as Chimerica's -- or China's and America's -- new focus, then a strong agreement in Copenhagen would be in their best interests. Indeed, failure would mean that Chimerica would miss out on an immense investment opportunity and would mean that billions of dollars would continue to be misappropriated for a fossil fuels-based economy.

That can be in no one's interest. The fossil fuel economy will disappear sooner rather than later, no matter what happens. Indeed, when it comes to economic, technological and security interests, greater energy efficiency combined with an increase in domestically-produced, CO2-neutral green energy is clearly superior to continued dependence on fossil fuels.

In the final days of the Copenhagen summit, China and the US would be well advised to begin a bidding war against each other -- a competition to see which country can pledge the greatest emissions reduction targets. Just as UN climate czar Yvo de Boer has recommended. 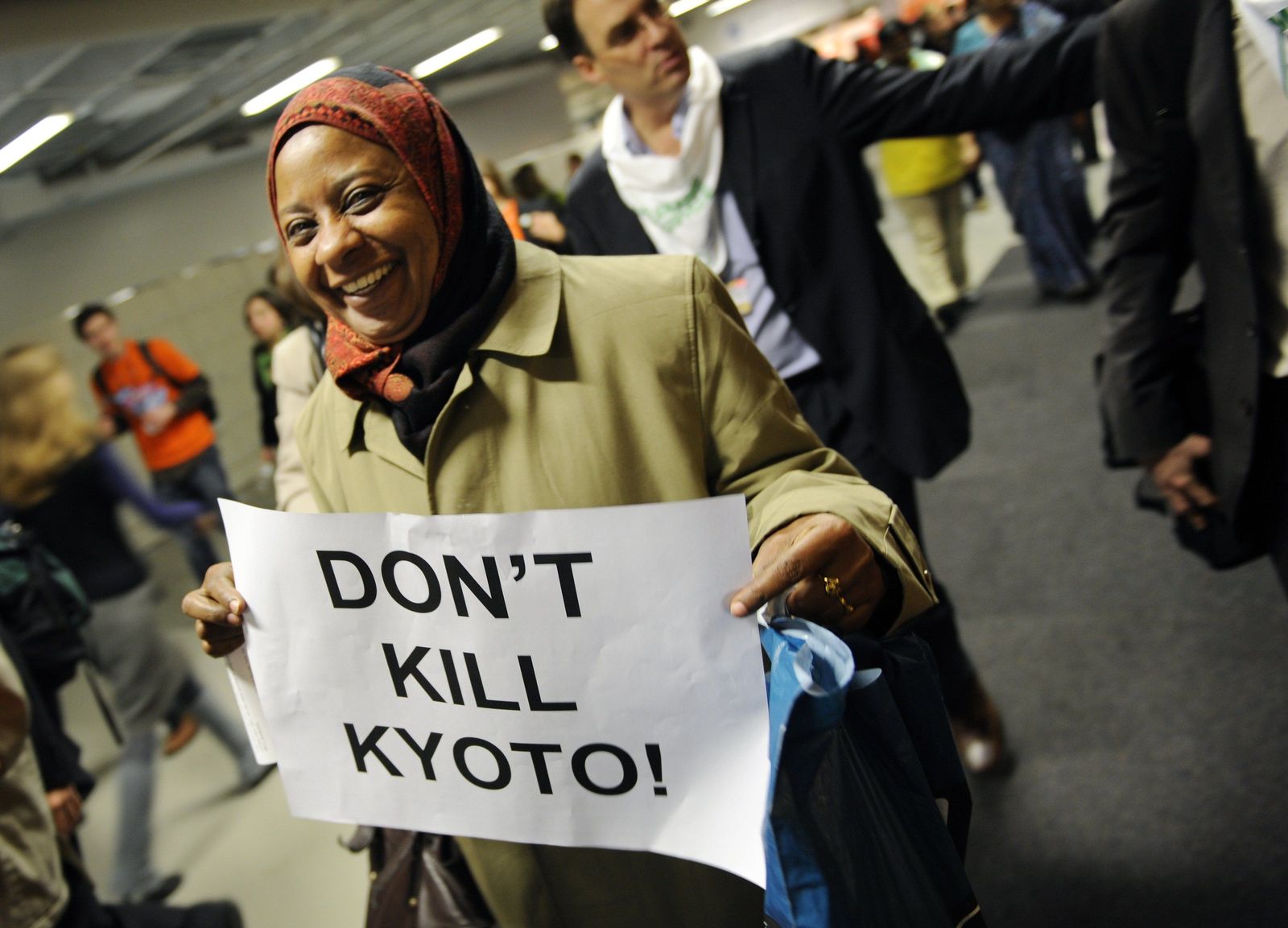 A climate activist in Copenhagen.