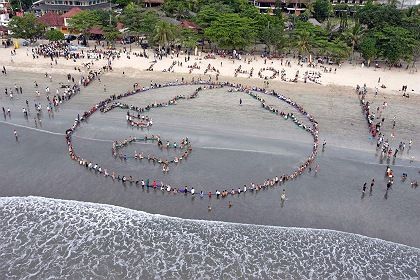 Greenpeace activists form a human chain in the shape of the Earth on a Bali beach.

Combating climate change represents the "moral challenge of our generation," and failure to act could send the human race into oblivion. That was the stark message UN Secretary General Ban Ki-moon delivered Tuesday at the UN Climate Change Conference in Bali.

"We are at a crossroad," said Ban in a speech to delegates from over 180 nations. "One path leads to a comprehensive climate change agreement, the other to oblivion. The choice is clear."

Ban arrived in Bali Tuesday to preside over the final days of the two-week conference at which scientists and government representatives have gathered to begin drafting a successor treaty to the Kyoto Protocol, which expires in 2012.

"The situation is so desperately serious that any delay could push us past the tipping point, beyond which the ecological, financial and human costs would increase dramatically," said Ban.

Climate scientists and UN environment officials have said that the most effective tool in halting global temperature increases that might cause irreparable climate change would be deep and strict emissions cuts in rich countries, which are currently responsible for the highest per-capita greenhouse gas emissions.

The Bali conference became mired in a dispute this week on whether to include language in a new contract that would bind rich nations to cut emissions by 25 to 40 percent below 1990 levels by 2020. Any weakening or removal of such language would anger developing nations, who have pushed rich countries to take more ownership over emissions reductions. While EU members support the language, industrialized nations including Australia, Canada and the United States have pushed for its removal.

The US, the only rich nation that has not signed the Kyoto Protocol, insists that its resistance to the binding targets does not mean it is opposed to a new treaty. "We want to launch a process that is open and does not predetermine or preclude options. We want to identify a way forward that will bridge our differences," said US Undersecretary of State Paula Dobriansky, according to the Associated Press.

Scientists say elimination of the language relating to binding reductions would be a huge setback. "This is not the direction we need to be going in. The stakes are too high for this kind of political games," said Alden Meyer of the Union of Concerned Scientists.

Delegates did reach one concrete goal on Tuesday. All the participating nations agreed to the structure of an adaptation fund that will help developing countries build seawalls and take other steps to alleviate the effects of climate change.

Ban said that the fund is a positive step towards tangible solutions to changes that emissions may already have set in motion. "By being creative, we can reduce greenhouse gas emissions while promoting economic growth," said Ban. "In this sense, climate change is as much an opportunity as it is a threat. It is our chance to usher in a new age of green economics and truly sustainable development."

But the fund is a long way from providing any significant relief. The UN body that will run the fund currently has reserves of just $60 million (€40 million), but the World Bank estimates tens of billions will be needed to finance adaptation. The Bali conference has done nothing to develop new sources of revenue.

A second major goal facing delegates before the Bali conference ends on Friday is to agree upon a timeline in which to draft and ratify a new treaty. The Kyoto Protocol, which governs emissions in 35 major world economies, expires in 2012. The UN wants to spend the next two years drafting a successor treaty, to give world governments three years to ratify it before it would ideally take effect in 2012. That would prevent any gap between the provisions of the Kyoto Protocol and the guidelines of a new treaty.

German Environment Minister Sigmar Gabriel told Reuters that agreeing to the timeline was crucial. "I don't need a paper from Bali that says we will just meet again next year," said Gabriel. "If you want to go a long way, you need to know the starting point and where you want to go."