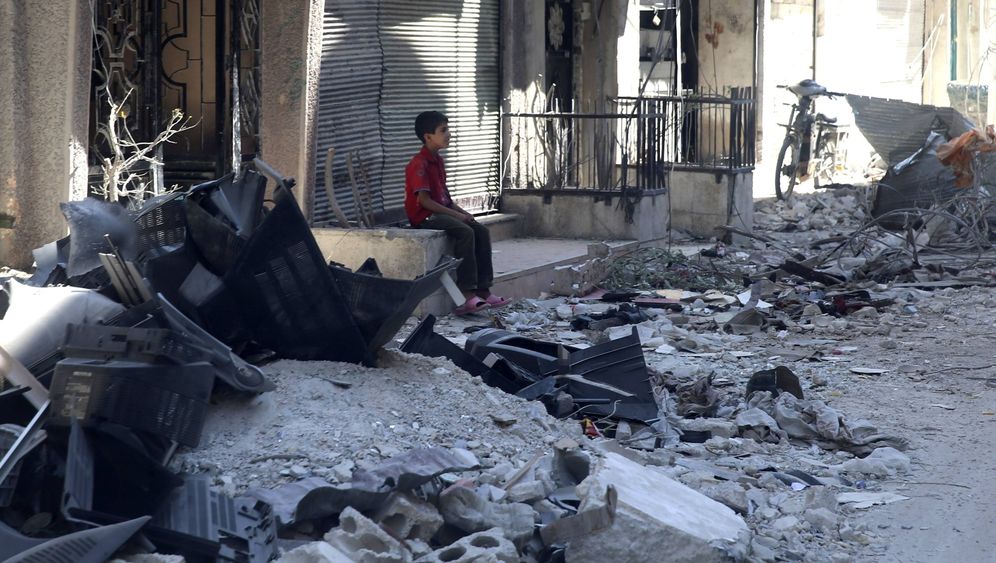 Three-year-old Ibrahim Khalil survived the chemical weapons attacks on Aug. 21. But then, 10 days later, he died of hunger -- just as the next child died hours after him and a third died four days later in the Damascus suburb of Muadhamiya.

When the world learned of the sarin gas attacks that took place in the suburbs of Damascus this past summer, it reacted with outrage, leading to Syria's dismantling of its chemical arsenal, which was declared complete by the Organization for the Prohibition of Chemical Weapons on Thursday. Yet hardly anyone seems to be taking notice of these new deaths. After being under siege for months, cut off from food supplies, electricity, water and any form of aid, people are beginning to die of malnutrition.

Children are also starving to death in Yarmouk in the southern part of Damascus and other places sealed off by government troops. But nowhere is the situation as fatal as it is in Muadhamiya, where six children had died by mid-October "and dozens are already so weak that an ordinary cold would kill them," says Dr. Amin Abu Ammar, one of the last doctors in the suburb.

The fact that President Bashar Assad agreed to destroy his stockpiles of chemical weapons is a piece of good news from a war that is not producing any other positive reports. In fact, it's too good, so good that the chemical weapons inspectors were promptly awarded the Nobel Peace Prize, and it seemed as if the rest of the war had ceased. And while European governments are mainly concerned about foreign jihadists infiltrating Syria, there are about 1,000 armed local fighters in Muadhamiya who don't even have any contact with neighboring towns.

The location of the city, once home to more than 60,000 people, has become its undoing. As in hundreds of other towns and cities across Syria, the residents of Muadhamiya demonstrated against Assad in the spring of 2011. But of all the places where protests were held, Muadhamiya was the closest to the regime's nerve centers: the headquarters of the Syrian army's 4th Armored Division in the north, the quarters of the Republican Guard in the west and the "president's airport" in Mezzeh in the northeast.

Muadhamiya was already surrounded before a single soldier was deployed. The fact that the population wasn't poor but consisted of the well-educated middle class made the situation even worse.

Muadhamiya was to be subjugated. When the government failed to achieve this goal, despite mass arrests and shots being fired at demonstrators, they decided to take it by force. And when that plan could not be implemented, despite mortar fire and air strikes, rockets armed with sarin gas rained down on the city, killing 85 people, according to doctors there.

But what the chemical weapons failed to achieve is now being gradually accomplished by hunger: the annihilation of a city. And it is happening without any of Washington's red lines being crossed or any public outcry in other countries -- and even without propaganda efforts from Damascus to conceal the problem. "Let them starve for a bit, surrender and then be put on trial," a member of the newly-formed paramilitary "Defense Committee" from Assad's Alawite faith told a reporter with the Wall Street Journal in early October.

The suburb of Muadhamiya has been cut off from the outside world since Nov. 18, 2012. Soldiers at checkpoints are not allowing anyone in or out. Snipers shoot anyone who tries to cross the lines. The physicians' committee has counted 1,700 deaths since the beginning of the uprising, including 738 since the blockade alone. Almost all of the city's 22 schools are in ruins. Classes were held in a few mosques at first, but that stopped when the mosques were targeted with mortar fire from the hills by the 4th Division.

The last shops closed in March because there was nothing left to sell. Electricity, water lines and the telephone network have been cut off. Bread is only available when someone manages to smuggle in some flour. Assad has turned Muadhamiya into a ghost town.

"At first, we survived on our supplies and what we found in the houses of those who had fled," says Ahmed Muadamani, a former businessman and current member of the revolutionary town council, who is now in charge of outside contacts through one of the last Internet connections, via satellite phone.

"Then many people tried to grow tomatoes and potatoes in all open areas, but there were several deaths when the snipers kept shooting at people in the fields and gardens." Women were shot in the chest and men in the head, says the doctor, adding that there is now nothing left to eat for the winter.

For a while, friends and relatives of the trapped residents were able to drive by along the road between Damascus and the Golan Heights, near Muadhamiya, and toss bags of food out of their cars. Residents would then perform the life-threatening task of collecting the bags. But the road has been closed for half a year now, and snipers have also taken positions there.

'There Are No Lambs Anymore'

Eid al-Adha, the Feast of the Sacrifice, which is based on the Biblical tale of Abraham who, at God's behest, went out to sacrifice his son Isaac, only to be stopped by an angel at the last minute, was held in mid-October. In Islam, the story mirrors the Biblical account, except that Abraham is known as Ibrahim and Isaac is Ismail. In addition, the salvation of the son is traditionally celebrated with the slaughtering of an animal, usually a lamb, and the meat is distributed among the poor.

Syrian friends in Germany wanted to give the starving residents of Muadhamiya a lamb, or more than one, if possible, to celebrate the festival. Using Skype, they asked how they should go about doing this and to whom they should send the money. They received their answer after three days: "There are no lambs anymore. Not a single lamb in the entire city. We have already eaten anything that crawls, runs and flies. And you can't eat money."

Up to 40,000 people have become trapped in Yarmouk, which has only been under siege for three months. For the Feast of the Sacrifice, an imam there issued a fatwa, or religious opinion. "We have permitted the consumption of dogs, cats, donkeys and cadavers," declared Sheikh Salah al-Khatib. "Otherwise, there is nothing left. How much longer do you intend to look on?" he asked Muslims celebrating the holiday around the world. "Until we eat each other?"

The last animals that have not been slaughtered in Muadhamiya are three cows, although again, gathering grass for the animals has become dangerous because open meadows are within the target range of the snipers. But without the cows there would be no milk left for the children.

All attempts to organize subsistence are failing one after another. The undernourished are getting sick more quickly; medicine is in short supply. The two underground hospitals have almost no electricity, because there is no diesel fuel left to run the generators. The same soldiers who are shooting at them sometimes sell them sugar for the equivalent of €20 ($27) a kilo, "but never rice or milk," says the doctor.

In recent months, the Red Crescent has tried to bring food into the city seven times, but to no avail. The United States State Department and the United Nations have appealed to Damascus in recent weeks to allow humanitarian aid for the besieged civilians, but there was no reaction from the Syrian government. The official position is that those surrounded by government troops are all terrorists or their supporters.

Suburbs in the northeast of Damascus have also been sealed off for months. But they cover larger areas, there are smuggling routes and, most of all, there are no snipers to shoot children as they gather firewood or grass for livestock. The tool of besiegement has become an omnipresent weapon, which is also employed by the rebels, who have surrounded the western part of Aleppo. The difference is that civilians there are not prevented from leaving, and food supplies are allowed in.

In mid-October, after weeks of negotiations, two groups totaling about 1,600 civilians were permitted to leave Muadhamiya. They included women and children, but no men between the ages of 14 and 60. When a third group arrived at the western checkpoint on Oct. 16 to be evacuated, as arranged, the artillery units on the 4th division's hill opened fire without warning. Four people died and several were severely injured. The rest fled back into the city, where 10,000 people remain.

Abdul Rassak al-Hamshari, 65, was in the last group that was allowed to leave. He has made it to Lebanon, to a small village in the Bekaa Valley near the border. He is now living in an unfinished concrete basement shared by 10 people, which is luxurious compared to life in Muadhamiya. "At least there isn't any shelling anymore!" says Hamshari.

His son is dead, but he holds out hope that his daughter-in-law will manage to escape. He has no illusions about the men who are still in Muadhamiya. "They are our sons, cousins and grandsons, and they will not give up, even if they all die. But what could I have done there? I'm old and useless."

When told about the "cat fatwa" in Yarmouk, he laughs briefly and intensely. "It's a good idea. But when we left, I hadn't seen a cat on the streets in weeks. They've all been eaten already."