Mohammed Dahlan takes care of his public image. Always clean-shaven, his black hair cleanly parted on the left, and surrounded by burly bodyguards, Dahlan, a politician and member of the moderate Palestinian Fatah Party, was clearly fond of grand entrances.

Dahlan stands for everything the Hamas extremists hate: He took part in the secret peace negotiations between the Palestinian Liberation Organization (PLO) and Israel. He has long maintained excellent contacts with American and Israeli intelligence, contacts that placed him at the top of Hamas' death list as a collaborator and traitor to the Palestinian cause. Early this year he was asked whether he was afraid. "Forget it," he answered, "not for a second." Dahlan insisted that he stood behind his men 100 percent. "We will do everything, I repeat, everything, to protect the Fatah activists," he said at the time.

But when the Islamists in Hamas began the last stage of their fratricidal war against Fatah secularists last week, there was no trace of Dahlan, 46. He had gone abroad weeks earlier, officially to undergo knee surgery, and seemed in no hurry to return. He was in Cairo when he learned of the first casualties within Fatah. Instead of hurrying back to the Gaza Strip to lead a counteroffensive, he went into hiding in the West Bank.

Nothing symbolizes the swift defeat of President Abbas' moderate Fatah Movement in Gaza as well as the clandestine escape of its security chief. In five days of intense fighting -- after weeks of sporadic civil war -- Hamas wrested political control over the 1.4 million Palestinians living in the Gaza Strip. Fatah's troops offered surprisingly little resistance, though they vastly outnumber Hamas. By the end of last week, victorious Hamas fighters were driving Dahlan's few remaining men half-naked through the streets, before executing them in the desert.

Rumbles throughout the Middle East

It was the second time in 18 months that Hamas took the world by surprise. In January 2006, contrary to all expectations, the party won a parliamentary election in the Palestinian Territories. Fatah went on as if nothing had happened, but last week seemed to receive its military comeuppance. More than two and a half years after its founding leader's death, the party of Yasser Arafat has been driven from the Gaza Strip.

The Palestinian Territories at a glance (click to enlarge).

Israeli intelligence agencies had been warning for months that Hamas was arming itself with new weapons and ammunition through clandestine tunnels. Informants had reported that the Islamists were sending fighters to Lebanon and Iran for training.

The power struggle -- which a "government of national unity" under Hamas Prime Minister Ismail Haniyeh was meant to avert -- erupted with unprecedented violence. Early in the week, Hamas militias abducted a cook from Abbas's presidential guard and hurled him from the roof of a 15-story building. They stormed the apartments of Fatah members with hand grenades and automatic weapons, mowing down everyone in their path, including old women and small children. More than 100 people were killed and 200 wounded in the fighting. President Abbas abandoned the Gaza Strip and declared the government of national unity a failure. On Sunday he swore in a new emergency cabinet with Salam Fayyad, his finance minister, as interim prime minister. Abbas dismissed Haniyeh from government, but Haniyeh still insists he leads a legitimate Palestinian cabinet. The result is two geographically separate Palestinian regions, the Gaza Strip and the West Bank -- politically separate and even hostile entities.

The takeover in Gaza will send rumbles throughout the Middle East. Hamas has links to radical groups in other countries, particularly Egypt. Sixty percent of the residents of the Gaza Strip are refugees or the descendants of refugees, and many young Palestinians from Gaza have studied in Cairo, where they were inspired by the Muslim Brotherhood. A number of these radicalized young men founded an Islamic resistance movement in 1987 called Harakat al-Mukawama al-Islamiya, or Hamas for short.

Now, a subgroup of the Muslim Brotherhood controls its own territory for the first time. Egyptian President Hosni Mubarak has managed to keep the Brotherhood under control in his country only with extreme brutality -- now Gaza may become a breeding ground for anti-Mubarak radicals. In Lebanon, the Shiite group Hezbollah has acted as a state-within-a-state for years; demonstrating its military strength in a war with Israel last summer. Even Jordan's King Abdullah may feel unsafe, because a large percentage of his country's population is of Palestinian origin, and some of the Palestinian refugees camps in Jordan are under de facto Hamas control.

The division of the Palestinian territories into a "Hamastan" on the Mediterranean and a "Fatahstan" on the West Bank of the River Jordan puts an end, for now, to the dream of an independent Palestinian state. This fraternal strife is the most recent example of the Palestinians' habit of "not missing an opportunity to miss an opportunity," as former Israeli Foreign Minister Abba Eban put it. The Palestinians refused to accept the UN's partition plan in 1947, which would have given them 45 percent of the former British mandate of Palestine. In 2000, then PLO leader Arafat rejected the offer of then Israeli Prime Minister Ehud Barak to establish a Palestinian state on 97 percent of the territories occupied in 1967. When the Israelis withdrew from Gaza in August 2005, Fatah and Hamas had a chance to demonstrate their capacity for ruling their own people. But the militias opted for civil war instead.

Israel has also contributed to the escalation in the Gaza Strip. Immediately after Hamas' takeover of the government, Prime Minister Ehud Olmert froze Israel's monthly payments of sales tax and customs revenues to the Palestinians. These funds stemmed from the export of Palestinian goods and, according to an agreement between Israel and the Palestinians, were collected by the Israeli authorities. The funds in question amount to about €42 million ($54.7 million), which is about a third of the Palestinian Authority's budget. (Olmert on Sunday promised to shore up the West Bank government by releasing these funds to Abbas and his new prime minister.)

Israel has repeatedly sealed off Gaza, and important staple foods like milk and flour have grown scarce. Exports come to a periodic standstill; flowers spoil behind border checkpoints and tomatoes rot in Palestinian greenhouses. Unemployment has led to growing frustration, providing a large recruiting pool for the military arm of Hamas, the so-called Qassam Brigades. "For many people, this was the only way to make money," says Fatah official Abdallah Frangi, wearily. Because the Palestinian government was no longer able to pay salaries, some members of the security forces even led a double life, serving the Fatah-affiliated police units by day and the Hamas militia by night. 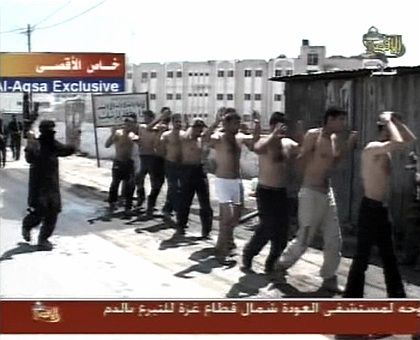 The so-called Middle East Quartet, consisting of the UN, the United States, Russia and the European Union, has also given off mixed messages over the last year and a half. First the group managed to secure Hamas's participation in the 2006 parliamentary election (over Israeli opposition), but then severed ties with the new government and made talks with Hamas contingent upon three conditions: The Islamists would have to recognize Israel, renounce violence and adhere to existing peace deals. Hamas refused, which led to its international isolation.

The United States, in particular, supported a coup against Hamas. To this end Washington supplied Abbas with money, weapons and ammunition. "The Americans clearly encouraged a confrontation between Fatah and Hamas," writes Alvaro de Soto, the UN's recently resigned Special Coordinator for the Middle East Peace Process, in his confidential final report.

Now the Palestinian movement is split, suddenly, under two leaderships, and once calm returns to Gaza the militants may be expected to return their attention to Israel, and resume firing Qassam rockets across the border. Jerusalem fears not just a new terror offensive but also growing Iranian influence in the Gaza Strip: Tehran already pays for Hamas's weapons today.

The government of Prime Minister Olmert wants to prevent the conflict from spilling over to the West Bank at all costs. This explains his Sunday promise to unfreeze Palestinian tax revenue. Now -- according to the American strategy -- Palestinians in Gaza will come to realize how much better off their fellow Palestinians in the West Bank are under Fatah.

Hamas may also try to show the world that it commands more than just the language of violence. As a gesture to the West, it announced last Friday that it would take steps to secure the release of BBC correspondent Alan Johnston, who has been held by kidnappers in the Gaza Strip for the last 14 weeks.

Meanwhile, a new humanitarian crisis began to take shape in Gaza. The territory has been sealed off, and aid organizations estimate that food and fuel supplies will last for about another two weeks. Reports on Monday had an Israeli fuel company, Dor Alon, lifting a gasoline embargo placed on Gaza last week, but it's hard to see how ordinary Palestinians there will avoid feeling isolated. "If there is a humanitarian catastrophe in Gaza, we cannot abandon the people there in their misery," said Hans-Gert Pöttering, the German president of the European Parliament.

Ironically the crisis may lead to something Israel has refused for the year and a half since Hamas won power at the polls -- diplomacy. Even the government in Jerusalem realizes that it will have to open Gaza's borders as soon as starvation becomes a real possibility. "Then we will be forced," predicts a senior government official, "to talk to the new rulers."