An eye and both legs: That was the price that 17-year-old Sadaullah Wazir paid for living in a part of the world that is deemed a "terrorist haven" and that has been a target for US drones over the past few years. Since Barack Obama became US president, these attacks have become increasingly frequent. The Pakistani newspapers now report daily on those killed and injured in the tribal areas in the west of the country.

"War is hell," the American Civil War general William Tecumseh Sherman said more than a century ago. And Sadaullah Wazir certainly ended up in hell, despite never having sought out a war, nor having fought in a single battle. The war came to him on Sept. 7, 2009, as he was sitting in front of his family home in the village of Machikhel, in northern Waziristan.

On that day, a drone flew over the village. Wazir was used to the sound; he had spotted the aircraft every few days in the sky. It was an evening during the fasting month of Ramadan, and most of the members of his family had gathered inside the house for prayers. After the prayers, they were to break the fast together.

Wazir was enjoying the last rays of sunshine and stayed outside. Suddenly there was a whoosh and a drone fired a rocket that hit Wazir's house. The young man jumped up in an attempt to help his family when the building collapsed. Wazir was just at the entrance. A wall collapsed on him and severed his legs, and a splinter tore into his eye. Two uncles and a cousin died in the inferno.

War Is Always a Propaganda War

The next day the newspapers wrote that "several terrorists were killed by a drone attack." The reports only ever mention that "terrorists," "militants" and "extremists" are killed, never civilians. After all, war is always also a propaganda war.

Wazir has now come together with 12 other victims to defend himself. He has joined a lawsuit initiated by Karim Khan, a 43-year-old who lost his son and brother four months after Wazir was injured during another attack on the same village. Ten other residents of Waziristan are supporting Khan, all people who have lost relatives in the attacks. They include 14-year-old Fahim Qureshi, who on Jan. 23, 2009, lost his left eye, suffered a fractured skull and was hit by several shards in the stomach. Ilyas Kashmiri, one of the most wanted terrorists in the world, was initially reported to have been killed in the attack. That report later turned out to be false. The seven people who died were ordinary people, relatives of the young Qureshi.

Waziristan, a sparse, mountainous region on the border with Afghanistan, is regarded as a haven for extremists. The Pakistani state has no influence here. The militia, tribal leaders and extremists are the ones who maintain their own version of order. When the Western allies marched into Afghanistan after the terror attacks of Sept. 11, 2001, many Taliban fighters fled across the border to this region. It was only eight years later, under pressure from Washington, that Pakistan's army started an offensive in southern Waziristan. Since then, the extremists have concentrated themselves in northern Waziristan. It remains unclear if there will ever be a military operation there.

Does that, however, make all of the people living in Waziristan enemies? Is there, in war, something like clan liability? And should rockets be fired into the homes of civilians?

Experts doubt the legality of the US strategy in Pakistan. Philip Alston, UN special rapporteur on extrajudicial executions, has asked the US to make public their rules for the drone missions, give the numbers of civilian victims and prove that there were no other viable alternatives to the deadly aerial attacks. Up to now, Washington has been cautious about making any statements regarding the drone operations. The line is simply that there is a reliance on the weapons in order to prevent militants based in the Pakistan territory from being able to exert pressure in the war in Afghanistan. A CIA spokesman declared recently that "the CIA counterterrorism operations are precise, lawful and effective." The intelligence agency maintains that many high-ranking extremists have been killed in the drone attacks, including the leader of the Pakistani Taliban, Baitullah Mehsud.

Pakistan's government has formally protested against the drone missions but secretly they have approved the flights, something that WikiLeaks, the whistle-blowing website, recently made clear when it released confidential US diplomatic cables. The authorities in Islamabad even handed over information about the possible location of terrorists, including target co-ordinates.

"They are free to shoot us, just because we live in a region that is regarded as evil?" Khan asks. He is the first person affected who has dared to stand up to the CIA, which is responsible for the drone attacks in Pakistan. It is a remarkable scenario: a dozen brave men -- simple people, some of them illiterate -- standing up to the intelligence agency of the United States of America.

The lawsuit is the first counter-strike by a few villagers against the CIA. In December, Kahn and his lawyer Shahzad Akbar also organized a protest in front of the parliament building in the capital, Islamabad. The Pakistani press took up the issue, and the people back in Waziristan got to hear about Khan and his lawyer. A group of plaintiffs formed. They are planning to demonstrate in Waziristan too.

Khan achieved something else that ensured that he caught the attention of the powerful in Washington. He found out the name of the CIA's station chief in Islamabad, Jonathan Banks, and named him in the writ. Banks was immediately withdrawn from Pakistan. The identity of the local CIA head is regarded as one of the best-kept secrets of the US Embassy in Islamabad. How was Khan able to unearth it and include it in the writ, which also names US Defense Secretary Robert Gates and CIA Director Leon Panetta? US diplomats already assume that the Pakistani intelligence agency ISI had a hand in the matter.

Khan's lawyer Akbar wants to fight the case in a civil court in Pakistan first and if it succeeds then have the sentence enforced in the US. "The demand for $500 million per fatality is certainly set very high," he admitted. "It is about ensuring that my clients in the end get appropriate compensation for the fact that they became victims of US policies simply because they live in a region where the US is fighting extremists."

If one speaks to those affected, however, they say that it is also about drawing the world's attention to their fate. In other words: to win points in the propaganda war.

A second front has unexpectedly opened up: Extremists in Waziristan are now threatening the plaintiffs. The militants have long learned to cope with the rocket attacks: Many live in caves, rarely travel by car and regularly change their location.

The militants profit in a gruesome way from the drone missions. After each attack in which innocent civilians die, they win over some of the relatives as supporters -- with a few even volunteering for suicide attacks. 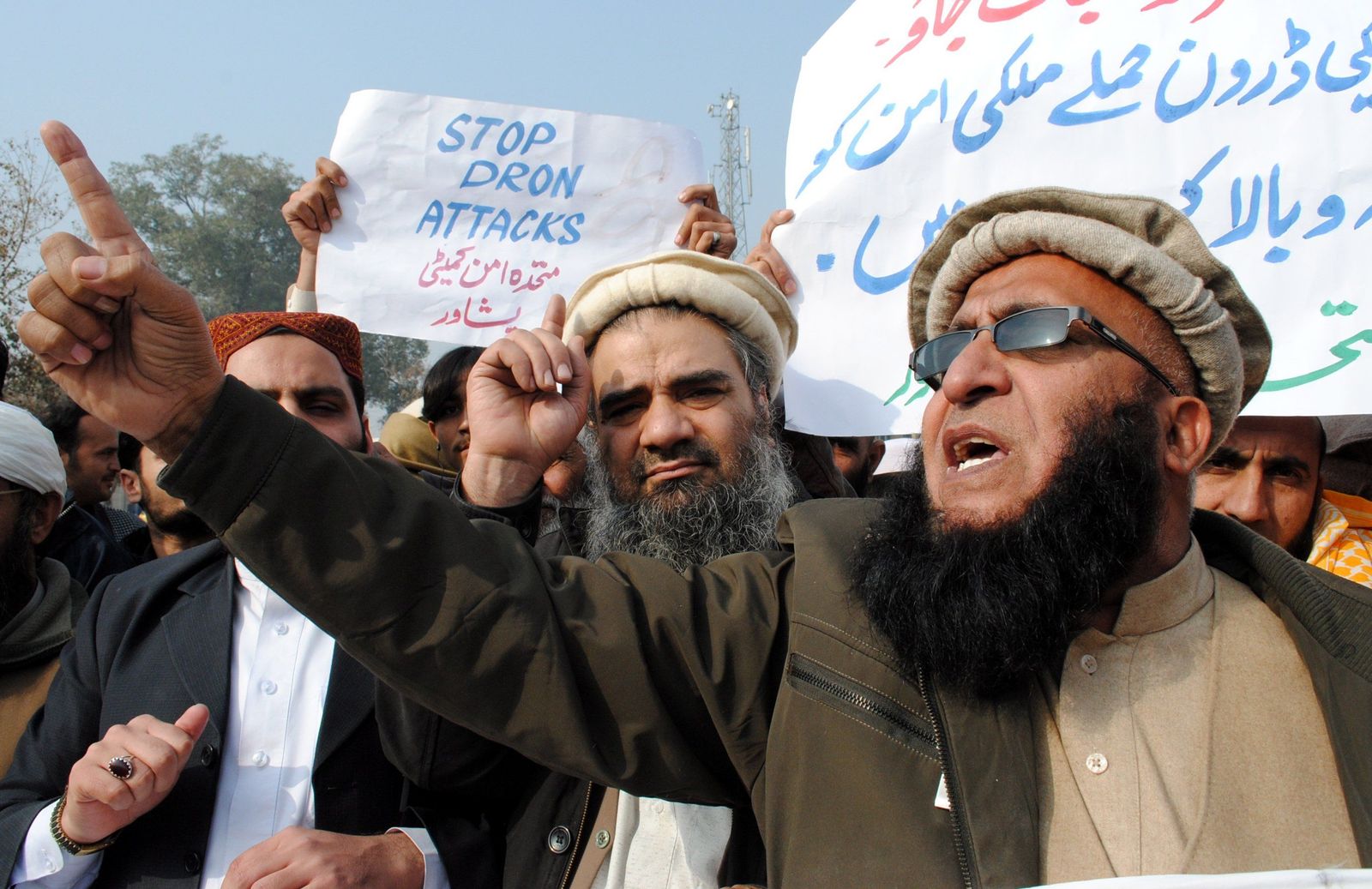 A Jan. 5 demonstration in Peshawar against US drone attacks: A group of victims' relatives is suing the US government and the CIA.