European Union politicians don't like to be outdone when it comes to showing resolve. Last week, French Foreign Minister Laurent Fabius said that if the Russians continue acting like they have, then tough new sanctions will need to be imposed. His British colleague William Hague said that economic sanctions were being planned. German Chancellor Angela Merkel threatened last Thursday that if there were problems surrounding the Ukrainian elections, "there would be further sanctions."

These strong words are the West's answer to Moscow's expansionist push. More than any other measure, it's the possible so-called third level of sanctions -- wide-ranging economic sanctions -- that are intended to make Putin back down. Because Europeans have ruled out the use of military means, these sanctions are the most powerful weapon that they have -- the diplomatic nuclear option in the battle over Ukraine's future.

But there's one problem with this weapon: It can only be used if all EU members agree. In the EU, sanctions need to be decided unanimously. This worked for levels one and two, because they were primarily symbolic acts that affected people close to Putin and imposed no real burden on the EU. But level three would be different, making it unlikely that the EU would agree on sanctions that would have a strong effect Russia. Europe's strongest weapon is actually a bluff.

In her talk with Sigmar Gabriel, vice chancellor and head of the center-left Social Democrats, last Tuesday, Merkel reported that during consultations about sanctions many EU partners are most interested in talking about how to secure exceptions for their own economies. Others are trying to avoid the subject entirely.

But there's a lot to discuss. On one side, there are the states taking a hardline position -- this includes most Eastern European countries and Great Britain -- who would rather implement sharp sanctions now instead of later. On the other side there are the more cautious countries, like the Benelux states, which are betting on diplomacy, or, like all of Southern Europe, are afraid of the economic costs a trade boycott could bring.

The French and the Germans are taking a middle position: They don't want sanctions, but will support them if Putin continues to destabilize Ukraine. Germany, in particular, is betting on financial sanctions, which would mean using the European Investment Bank (EIB) and the European Bank for Reconstruction and Development to exert pressure on Moscow. At the EIB there's a list of projects that would be put on ice if sanctions were expanded.

Countries like Great Britain or Cyprus are strictly against this, because it would also have an effect on their own financial sectors, and are arguing, instead, for an energy boycott. However, this faces strong resistance from Eastern European countries, like Bulgaria or Slovakia, who depend almost entirely on Russia for gas.

Genuine economic sanctions would clearly be expensive for the Europeans. According to a confidential report by the European Commission, Germany would have to reckon with a loss of 0.9 percent in growth this year, and 0.3 percent next year. The situation looks even direr in other countries.

Sanctions May Not Work Anyways

Many governments are also skeptical that the sanctions could actually get Putin to back down. In German security policy circles, that outcome is considered almost impossible. The thumbscrews the West has thus far implemented "haven't instilled much fear" in Putin and his associates, one security official argued. Russia has little foreign debt and large currency reserves, giving it a transitional period of at least two years -- enough time to find new buyers and distribution routes for Russian gas. "We'll be sitting in the cold before the Russians run out of money," says one security official.

Putin's determination to secure his influence over eastern Ukraine is also related to the region's importance to the Russian armaments industry. The Russian army's airplane motors, gear boxes and rocket equipment are, according to Western knowledge, in large part built in eastern Ukraine. That's why the Kremlin has also, according to the security official, planned painful economic sanctions of its own. "If the Russian leadership sees itself as strong, even if we don't see it that way, then it will also act strong -- and at the moment it feels very strong."

Although the 28 EU member states try hard to project a sense of unity to the outside world, their differences in opinion make themselves felt in internal meetings. Merkel is afraid that, in the end, the Union's disunity could spill into the open and Putin would have accomplished one of his important goals, dividing the Europeans.

Looking for Ways to Avoid the Issue

That's another reason why the German government wants to avoid, at all cost, a situation in which sanctions are unavoidable. Foreign Minister Frank-Walter Steinmeier has pointed out that Moscow has recently stopped questioning the legitimacy of the Ukrainian presidential elections, which are planned for May 25. The German government is grasping for these kinds of signals, because they may serve as a reason not to implement the third level of sanctions.

Before concrete steps can be defined, the EU also needs to discuss when the third level should even be implemented -- a way to skirt the delicate situation. "Clearly there will be economic sanctions if Putin sabotages the vote," says a high-ranking government official. "But it's unclear what would constitute sabotage."

One way to at least defer the debate around sanctions would be to push the Ukrainians to delay the vote. But the German government does not want that at all, because it would seem like a capitulation to Putin. "A delay isn't in our script," Markus Ederer, a state secretary in Steinmeier's Foreign Ministry, stated last Wednesday during a session of the German parliament's foreign affairs committee. 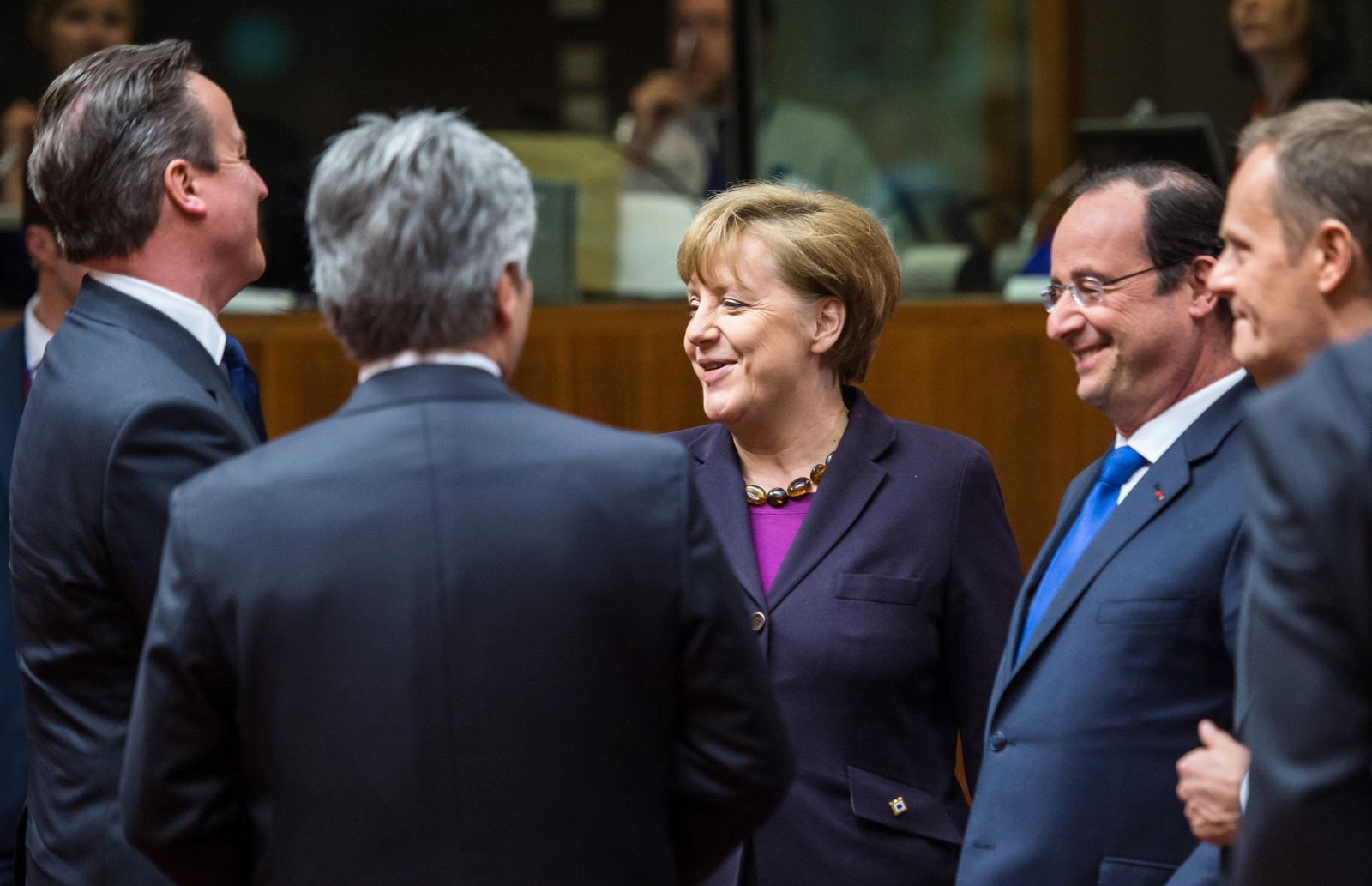 Tension over sanctions: European leaders at a round table meeting during an EU summit in Brussels on Thursday, March 20, 2014.