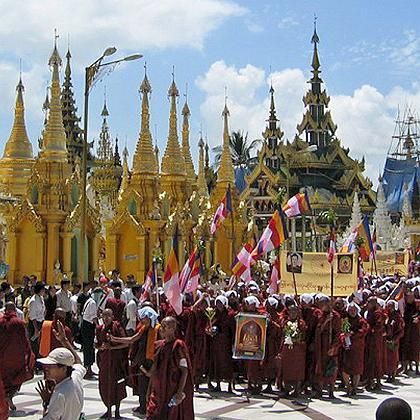 Protesting monks in Burma: Salvation can only come from Beijing

At some point in the summer of 2005, the head of Burma's junta, Than Shwe, called in his chief astrologer. The general had followed the advice of the fortune teller a few months previously and built a new capital in the highlands. He had been told this was the only way to hold onto power. Now the general wanted to know what would be the best date to make the move.

The wise man, a member of the country's Buddhist clergy, looked into the stars and said: "At 6:37 a.m. on Nov. 6, 2005." Despite the fact that the new capital didnt even have a functioning fax machine, an endless convoy of military trucks full of office furniture made its way to its new quarters on the "auspiciously lucky day." The name Naypyidaw, which General Than Shwe had chosen for his new jungle hideaway, was an indication of the state of mind of Burma's strong man: The name means "royal land."

Since 1962, Burma has been ruled by brutal generals who have sought the salvation of the country in "the Burmese path to Socialism." Yet in no other country in East and Southeast Asia is spiritual and superstitious belief so much a part of everyday life. After the closed-off Himalayan kingdom of Bhutan, Burma is probably the most Buddhist country in the world.

At least once in his life, each man must spend weeks if not months in a monastery. Burma expert Bertil Lintner believes that out of the 53 million population, more than 400,000 men are currently saffron-clad monks, equalling the number of soldiers. Other estimates put the number of monks at as high as 800,000.

But faith is not just a thing for the ordinary people. The otherwise unscrupulous military regime seeks the blessings of the gods, Buddha and the 36 "Nats," as Burma's own spirits are called. Sometimes with truly strange state measures.

For example, in the 1970s military dictator Ne Win -- who ruled the southeast Asian country from 1962 to 1988 -- invalidated the 100 kyat note and replaced the national currency with 90 kyat bills. Ninety is a lucky number, and with his absurd move, Ne Win hoped to not only win the blessing of his country, but also to escape the awful purgatory that is painted on every Buddhist temple.

It's a fear clearly shared by his successors. And it might partly explain why, in 2003, five years after it crushed the pro-democracy movement with appalling bloodshed, the junta allowed a white elephant that had been found in the jungle to be brought to Yangon. A temple was built at the edge of the city, with its population of 5 million, especially for the animal so it could be publicly displayed. According to popular belief, white elephants symbolize luck and, in this particular instance, it was a sign that the gods supported the regime.

The military leaders along the Irrawaddy may be unparalleled in their cruelty, but even in modern and democratic Asian societies it is not unusual for politicians to take excursions into the spiritual gray areas that stem from Asian tradition and superstition.

Look no further than Taiwan. Just a few months ago, the general secretary of the Taiwanese opposition party, Kuo Mintang (KMT), took a short trip to the San Francisco Bay Area. There, he visited Lin Yun, the grandmaster of Black Sect Tantric Buddhism, who lives in an opulent mansion near UC Berkekey.

He was hoping Lin Yun could advise him on his chances in the upcoming presidential election in Taiwan. Master Lin Yun lived in Taiwan for years and has served as a spiritual and policy advisor to numerous leading politicians on the island. His followers also believe that he can perform magic rituals that can alter destiny.

Even the leaders of the Chinese Communist Party and their families have indulged in religion and the occult.

In the mid-1990s, for example, the party head insisted on finding the reincarnation of the Panchen Lama -- who is just behind the Dalai Lama in the Tibeten religious hierarchy -- with the help of the ancient religious ritual of the Golden Urn. The main point of the move, of course, was to thwart the Dalai Lama's attempt to name his own Panchen Lama, but it is no secret in Beijing that the daughter of Communist Party giant Deng Xiaoping was drawn to Buddhism even while her father was still alive.

In practice, though, things look a bit different in China. The constitution ostensibly guarantees freedom of religion, but China's security services oppress Tibetan nuns and monks just as they do pastors of underground Christian churches and Falun Gong practitioners. The Chinese secret service and think tanks have warned for years that freedom of religion could be a danger to the dictatorship's stranglehold on power.

Finding examples of the dangers religion poses to the state is not difficult for the Chinese. In the Philippines, the Power People Revolution in the 1980s against then-dictator Ferdinand Marcos and corrupt President Joseph Estrada, for example, would hardly have been possible without the support of the Catholic Church. In Indonesia, former President Mohamed Suharto's move to crush a Muslim uprising in Tanjung Priok in 1984 meant that he had to do without the support of major Muslim groups.

It was hardly a surprise, then, that the blind Islamic cleric Abdurrahman Wahid became the first president of a democratic Indonesia in 1999. Gus Dur, as he is called by his followers, was, at the time of his election victory, the head of Nahdatul Ulama. With 40 million members, it is the Muslim country's largest religious group.

But it is debatable whether Burma's military junta is spending much time these days thinking about the religion of their country and continent. All the occult hocus-pocus has not worked, and now they are only thinking about how to survive politically and stay in power.

While several tens of thousands of monks marched through the streets of Yangon at noon Thursday, chanting sutras and singing songs of peace and understanding, military vehicles packed with soldiers and riot police were already taking up their positions in the side streets.

"In the past, the generals did indeed portray themselves as pious Buddhists in order to remain in power," says Soe Aung, leader of the Burmese opposition in exile in Bangkok. But the generals would go to every extreme to stay in power.

As absurd as it may sound, salvation for the monks in the Yangon streets can now only come from Beijing. Burma's junta can hardly survive without the economic support of the superpower to its north. And China's diplomats recently advised the superstitious generals in Naypyidaw that they should solve their problems through moderate democratic reforms.

In doing so, China is not in the least motivated by reverence for the holy men in the red robes. Beijing just wants to make sure that the 2008 Olympics aren't endangered by any trouble in its backyard.