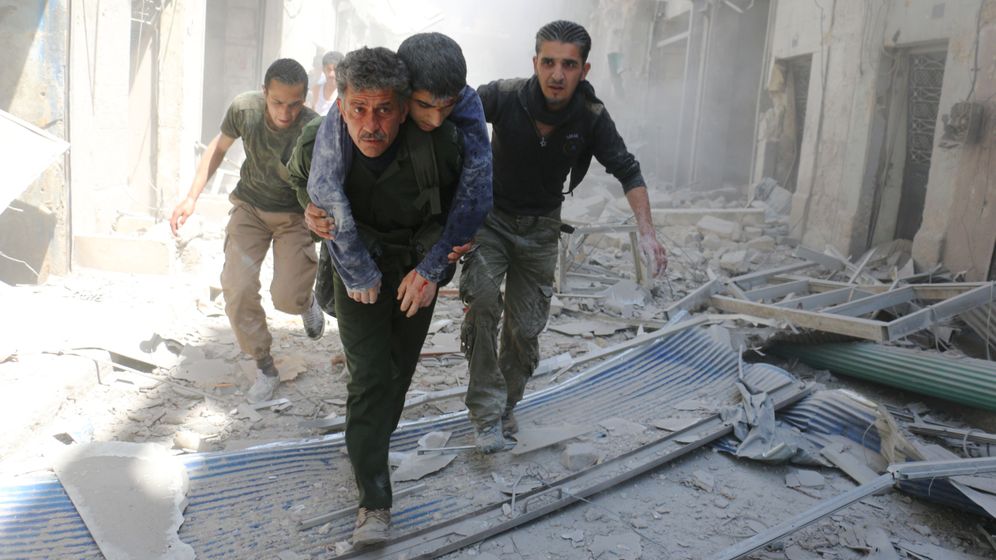 For almost four years now, eastern Aleppo has been the target of bombing by the Syrian air force, with Russia joining the bombardment as of last September. The cease-fire announced in February only briefly changed the situation. Beginning in April, the Syrian army again increased its targeting of civilians.

The most tragic bombing occurred close to three weeks ago, when the regime's warplanes fired rockets and destroyed the al-Quds hospital, which is supported by Doctors without Borders. More than 50 people died, including Muhammad Waseem Moaz, one of the last remaining pediatricians in the city.

Prior to the war, thousands of doctors worked in the city, which was once home to a million people. In the eastern part of Aleppo, only around 30 doctors remain today. Osama Abo El Ezz, a 30-year-old surgeon, is one of the few still holding out.

At the beginning of the telephone interview with SPIEGEL, the doctor said that our discussion might be repeatedly broken off if he had to perform an emergency operation or if jets approached the hospital.

SPIEGEL: Did the April 27 attack on the al-Quds hospital have an impact on you and your work?

Ezz: Absolutely, even if they aren't bombing us, we still run to the cellar every time jets appear over the city. They are able to target much more precisely than they could before when they dropped their untargeted barrel bombs. They were savagely powerful, but they hit their target less often. Today they do hit their targets. And they obviously want to hit and kill the last doctors and nurses in eastern Aleppo.

SPIEGEL: You knew one of the victims of the last attack well -- the pediatrician Muhammad Waseem Moaz.

Ezz: We were close friends. He didn't have a family and he more or less lived in the hospital, treating 100 and sometimes even 150 children a day. He was a workaholic, but above all, he was the hope of the children of Aleppo. Abu Abdo -- that was his nickname -- took away any fear they had when they came to him wounded and bleeding. He had offers to work elsewhere and leave Aleppo, but he never went.

SPIEGEL: And you? Will you stay on?

Ezz: I won't go. If we doctors leave, we are not only robbing the people of their chance to get medical treatment, but also of the hope that our city will survive. There is no replacement for anyone who leaves or dies. Many people here are being driven crazy by fear and desperation. Children are hysterical and are wetting themselves. The elderly get heart palpitations when they hear the sound of the jets. Three months ago, rockets killed an entire family in the Firdaus quarter, except for the seven-year-old son. We took him to the hospital and treated his injuries, but then we had to tend to the other patients. He suddenly began to shake uncontrollably. He had swallowed all the pills he could find. We were just able to save him. Please excuse me for a half-hour -- there's an emergency outside.

Ezz: An amputation. We have so many cases where we have to conduct urgent amputations, but we often have to put off even these patients because we have so few options available for treating them. A few days ago, I had a 12-year-old boy here who had shrapnel in his stomach, his bowels were hanging out. But he also had shrapnel in his chest and skull and an injury to his left eye. Those are complicated operations, but we don't even have a vascular surgeon here. In the end, we were able to get him to Turkey, where some others from his family were already located. I believe he lost his eye. We're running on empty here. On top of that is the fear that the attacks on us are getting more targeted.

SPIEGEL: You don't think the attacks are random?

Ezz: No, they never were. I had three colleagues with whom I provided care to wounded protesters starting in 2011. In May 2012, they were arrested together at a regime checkpoint. Seventy-two hours later, residents found three charred bodies that were taken to the coroner. The families of the three then identified them. Any person providing medical aid is risking their life. Why are they killing us? It is not enough for them to kill people every day in Aleppo. They also want to destroy any chance that they can be treated. Assad's regime has swept away the universal idea that doctors should be spared along with all other humanitarian principles. No government cares that we are all being killed one after the other. Human rights and all that? They are empty words. Like all the others who are still staying here, I am nonetheless waiting for the world to stop being indifferent about our fate. What choice do we have anyway? Should we give up and flee?

SPIEGEL: Since the beginning of the revolution, you have campaigned for the release of arrested doctors as well as providing care for the injured. Did you envision yourself being involved in a war, even years later?

Ezz: No. In 2011 I was beaten after protests together with 27 other colleagues and 14 of us were arrested, but we were released again the next day. We founded the network Nur al-Hayat, or Light of Life. We wanted to defend peaceful demonstrations and treat people who had been shot. But then I learned that the military's secret service was searching for me. Colleagues were murdered and I had to abandon my work at the university hospital and go underground. Later we founded the Aleppo Doctors Council and attempted to continue providing medical care.

SPIEGEL: What do you tell your family regarding your decision to remain in Aleppo?

Ezz: My wife and the three children are now living in Turkey. When we speak about it, I always tell them that our life is in God's hands. I hope he will protect me. But if I die in our hospital, at least that is the right place. I could leave the city and die anywhere in the world in a traffic accident. That would be a betrayal of all those who hope that this criminal regime will one day be gone. I don't want my children to grow up as refugees. They should be able to live in Syria as free people.

The doctor is forced to interrupt the interview again. One day later, he gets in touch via WhatsApp and says there are so many emergencies at the moment that he won't be able to continue again until late evening. He gets back in touch at 10 p.m.

SPIEGEL: What do you do with patients who don't need surgery but are just sick?

Ezz: Not much -- we have to neglect them. Hepatitis, heart disease -- we can hardly even treat cancer cases. We try to get the worst cases to Turkey, but even that is getting more difficult. What should I do? I had a woman whose uterus had been removed and urgently needed further treatment, but it wasn't possible. I gave her painkillers and assured her that the bombing would subside and that more doctors would return to alleviate her anguish.

SPIEGEL: What do you need most urgently?

Ezz: Doctors! Laboratory equipment! But no one dares to come here anymore. One of the few who did come was Abbas Khan, a British man. While walking one day he got lost and ended up in an area held by the regime. He was arrested and died after a year of torture. We also need a hospital on the Turkish border that won't get bombed.

SPIEGEL: Did you have hope when the cease-fire was announced in February?

Ezz: Of course I had hope. As fragile as this peace may have been, at least the people had a chance to catch their breath after years of fighting and bombing that had indiscriminately hit residential areas, markets, bakeries and hospitals. But of course the attacks have begun again -- and they have been even more intense in recent weeks than they were before. I have lost so many friends and colleagues in the last five years -- and now it looks as though Aleppo, or at least the eastern half of it, is simply going to be destroyed completely.

SPIEGEL: What do you believe to be the purpose of the attacks?

Ezz: To rid Aleppo of all people, just like in Homs. And then to hunt down anyone who has ever stood up against Assad's regime. To not allow the original residents to return, but rather to change the demographics of the city and the entire country -- even if that means the destruction of Syria.

SPIEGEL: And what will you do?

Ezz: I ask myself that question every day. But as long as the situation remains the way it is, I have no other choice but to stay and help the people here survive.