Jumaa al-Eid didn't want to flee. He had a harvest to wait for. His neighbors had all packed their belongings and left, making their way north from the city of Saraqib, where they lived, to the Syrian province of Idlib.

They were afraid of the air raids, but 11 hectares, or about 27 acres, of grain and beans were all that al-Eid's family of six had left. "The harvest!" the man says on an erratic WhatsApp call. "I wanted to save my harvest!"

Al-Eid and his family watched the jets fly overhead during the day and could see the glow of the fires at night. "Everyone was gone. My children trembled with fear. I explained to them that we must be patient. The harvest!" It would have been in May.

But when fighter planes destroyed his generator and water pump, even al-Eid, perhaps the last farmer of Saraqib, gave up. One frigid January morning, al-Eid set off with his wife, two children and his elderly parents, the six of them joining the legions of refugees trying to escape the onslaught of Syrian dictator Bashar al-Assad's forces and their Russian and Iranian allies. Since last December alone, more than half a million people have fled.

Even before the approaching armies arrive, towns and villages have been left deserted. On January 28, Assad's troops marched into Maarat al-Numan, the last major city in southern Idlib. Their advance put them only a few kilometers away from the provincial capital of the same name.

For two days last week, the tanks didn't advance quite as quickly. On Feb. 3, eight Turkish military personnel were killed by Syrian artillery fire near Saraqib, with Turkish F-16s launching retaliatory strikes against Assad's forces. It is thought that 13 soldiers died, though the official count from the Turkish side was nearly three times that. But their deaths didn't stop the air raids on hospitals and residential areas -- or on refugees -- from continuing across Idlib. There were skirmishes again last week between Turkish and Syrian troops in which soldiers on both sides were killed.

Syria's last rebel stronghold, the northern part of which is packed full of 3 million people, has become the plaything of two warring autocrats whose relationship could at best be described as "complicated."

Russian President Vladimir Putin and his Turkish counterpart, Recep Tayyip Erdogan, regularly reaffirm their friendship to one another -- before then going out and killing the other's allies, to be once again followed by warm words of affection. With tactical finesse, Russia's leadership has chosen Erdogan as its partner in Syria, and is in the process of gradually prying him away from NATO -- all while repeatedly thwarting the Turkish president's grabs for power. The two keep a furtive eye on one another, not unlike poker players, while they pursue opposing interests. And not only in Idlib.

In Syria's predominantly Kurdish northeast, Moscow gave the green light for a Turkish invasion after the partial withdrawal of U.S. troops, but at the same time, it pressured the Kurds to submit to Assad's regime. The two countries support different factions in Libya, as well. While Ankara has been sending mercenaries and weapons to UN-backed Prime Minister Fayez Sarraj, Moscow has done the same for the warlord Khalifa Hifter.

Nowhere do the consequences of this complex political bromance play out as lethally as in Idlib.

Lines of overloaded cars, donkey-drawn carts and people stretch for kilometers. Temperatures at night often plunge below freezing and many of the people making their way north don't even have money for a tent. What's more: Up north, there's no more room. All the schools that have somehow survived destruction are already packed with refugees and the flow of foreign aid, right when it's needed the most, is beginning to slow. A UN resolution that would have permitted goods to cross the Turkish border was recently blocked in the Security Council by Russia and China.

The day that al-Eid and his family fled Saraqib with their tractor and trailer, they managed to travel 3 kilometers (1.9 miles). At one point, a Syrian fighter jet flew right at them. "He flew lower and lower," al-Eid recalls. "He shot at us with his aircraft cannon. The bullets struck 4 or 5 meters away. I thought: How do we get away before he turns around?"

They found shelter in an olive grove on the side of the road: "I drove into it, just off the road. My wife was crying. We were all terrified. We waited for three hours. We arrived in Binnish in the evening," about 15 kilometers to the northwest, "where I met up with a friend again who owns a chicken farm. He had reserved a tiny room inside for us. It doesn't smell good, and bombs strike nearby. But we don't freeze to death." More than anything, he's afraid that his two children will get sick. There are hardly any hospitals left and he has no money left to buy medication in any of the few remaining pharmacies.

Such is the fate of six of the more than half-million people who have been displaced, a number that has since likely grown to a total closer to 600,000. On top of that are the hundreds of thousands who fled much earlier, in an exodus that began last spring. Unimaginable though these numbers may be, they have mostly been forgotten by the rest of the world.

The fact that the Russian air force is targeting hospitals in order to deprive people of a last resort doesn't even stir an indignant reaction from European governments anymore. When one leading UN representative described the deadly situation in Idlib during a background interview in Beirut in January, he insisted on not being quoted by name under any circumstances. He said he didn't want to become a persona non grata in Damascus and be deported.

There was actually an agreement reached by Turkey and Russia back in September 2018: Ankara was given control of Idlib and in return, it was expected to rid the province of the al-Qaida-affiliated Hayat Tahrir al-Sham (HTS) militia, which had taken over much of the area with its tens of thousands of fighters. Jubilation was great at the time in Idlib, but neither side stuck to the agreement. Turkish security forces were either unable or unwilling to eliminate HTS and Putin and Assad continued their bombing campaigns.

Then the Europeans reduced their financial support of local city councils. The money, they argued, could fall into the hands of the jihadis. But in the end, the only people who were weakened were the jihadis' opponents.

"For years, the provincial health administration has been able to maintain its independence from both the radicals and the Turks," says the organization's founder, Munzur Khalil. "We could always argue that otherwise the Europeans would no longer pay. Germany had until recently funded a coordination office for the distribution of medicine, so that every hospital and pharmacy knew what was in stock and where, and what was needed. Since Germany stopped paying, this no longer exists."

Saudi Arabia, in turn, also stopped financing the province's largest hospital, located at the Bab al-Hawa border crossing, back in September in order to punish Turkey for its Libya policy. "But they hit us," Khalil says. He laughs bitterly when he talks about the last UN meeting in Gaziantep, Turkey: "We explained how dramatic the situation was. They nodded and then asked what precautions we were taking in case the coronavirus spread to Idlib." Khalil says he wishes he had such worries.

In late January, a Russian jet destroyed one of the province's last remaining hospitals in the city of Ariha. Nearly all of the residents had already left, but the doctors were still receiving 300 to 400 new patients a day, mostly people who had been injured in air raids. "We suspected that we would be attacked," says Wajih al-Karat, a doctor at the hospital. "Hours before, a village had been bombed. All of the 40 people who had been seriously injured were brought to us. Then we saw how drones were following the ambulances." They operated as fast as they could and gathered staff and patients alike in the basement. The attack destroyed large parts of the building, killing five neighbors and a boy. Then the hospital director ran outside to help the wounded. He heard too late that the jet had turned around and was attacking again. A piece of shrapnel hit him in the throat and he died three days later.

"By Any Means Necessary"

Assad has never left any doubt that he wants to reclaim every inch of Syria. With each passing year, the rebels have ceded additional cities and provinces. The blow of their capture has usually been lightened by agreements that those who didn't want to submit to Assad's rule would be deported -- to Idlib. But those days are over, and there's no way out for the people of Idlib now.

In Maarat al-Numan, uniformed men belonging to Assad's forces unceremoniously posted a photo of two of them standing next to the corpse of a mentally disturbed, elderly man who had been forgotten in the chaos.

It's not only Syrian army units that are killing or driving their own people out, however -- it's also tens of thousands of Shiite militia members from Afghanistan, Pakistan, Lebanon and Iraq, led by the Quds Force, which is controlled by Iran's Revolutionary Guard. The network was built up by Quds commander Qassem Soleimani, who was killed in an American drone attack in early January. But his network lives on.

The last hope for the besieged in Idlib now rests on the ire of the Turkish president, who fears for his own power if Turkey is pressured to accept another million or even 2 million Syrians into the country. Already, Turkey is home to more than 3.6 million refugees, according to the government. "The situation in Idlib is unacceptable," Erdogan has said. For the first time, he has also blamed Russia directly for the escalation.

A week ago Monday, when the Turkish soldiers were killed by Syrian artillery fire, provoking a forceful response by Erdogan's troops, the Turkish president was visiting Ukrainian President Volodymyr Zelensky. The trip had been planned long in advance, and yet the timing still suited Erdogan well. He used the appearance for a reckoning with Moscow, which he once again condemned for annexing Crimea. He also pledged $33 million (30.3 million euros) in military aid to Zelensky. And he chanted "Glory to Ukraine," a nationalist slogan that the Russian government must have seen as a provocation.

After his return to Ankara, he announced he would launch a military deployment if Assad doesn't remove his troops from the region by the end of February. In what could be understood as an open threat of war, Erdogan said either Russia ceases its bombardment of Idlib, "or we will do what is necessary." It appears that he's also hoping for support from the United States. NATO Commander Tod Wolters, a U.S. Air Force general, paid a visit to Ankara in early January to discuss the Syria crisis. In a statement released on Feb. 4, the U.S. State Department also welcomed Turkey's retaliatory strike.

Jumaa al-Eid, the farmer, has once again moved further north. "Too many bombs were falling," he says, adding that hasn't been able to find a place for his family to stay. They're spending their nights in the trailer now: "It's as if the planet just keeps getting smaller and smaller for us." 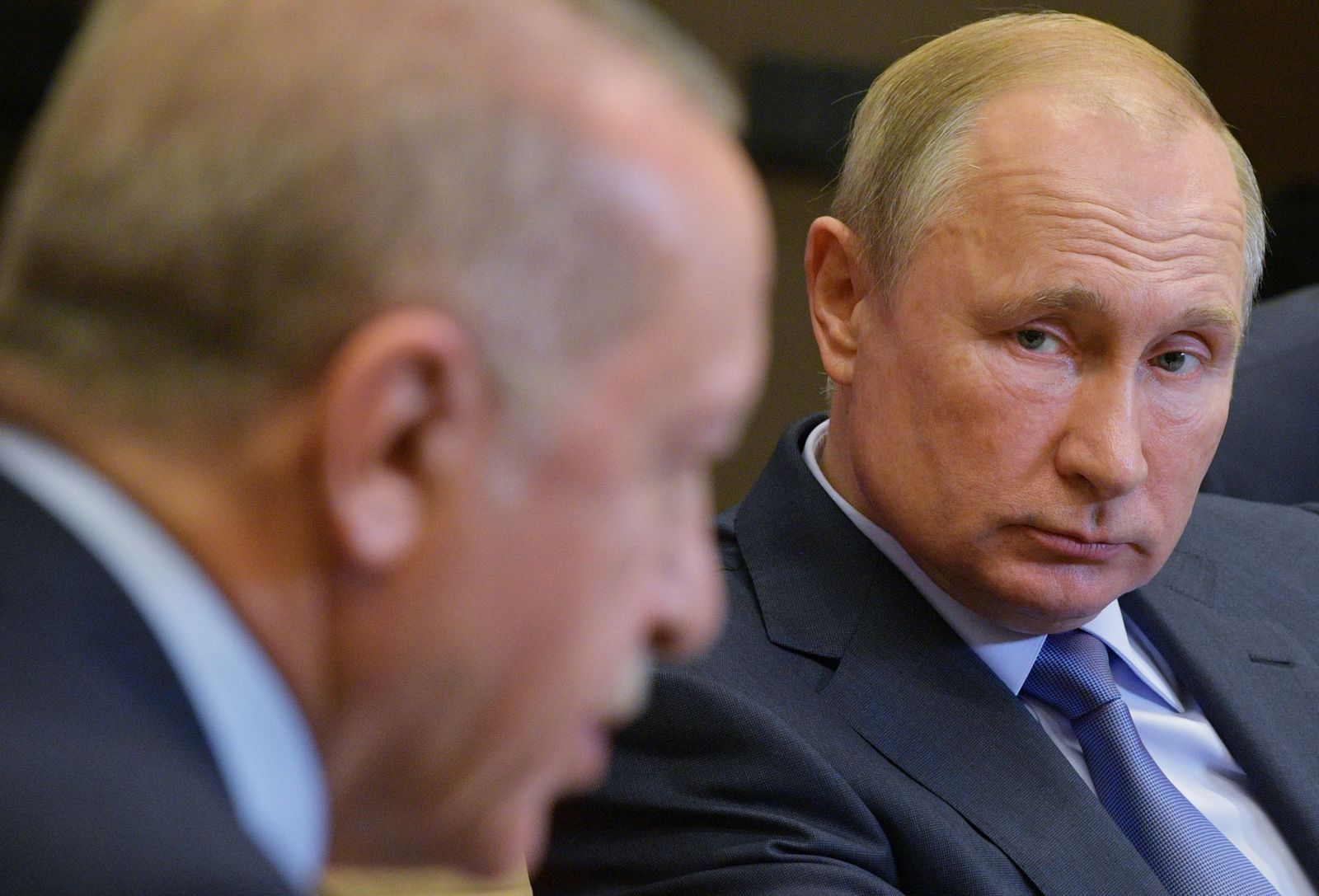 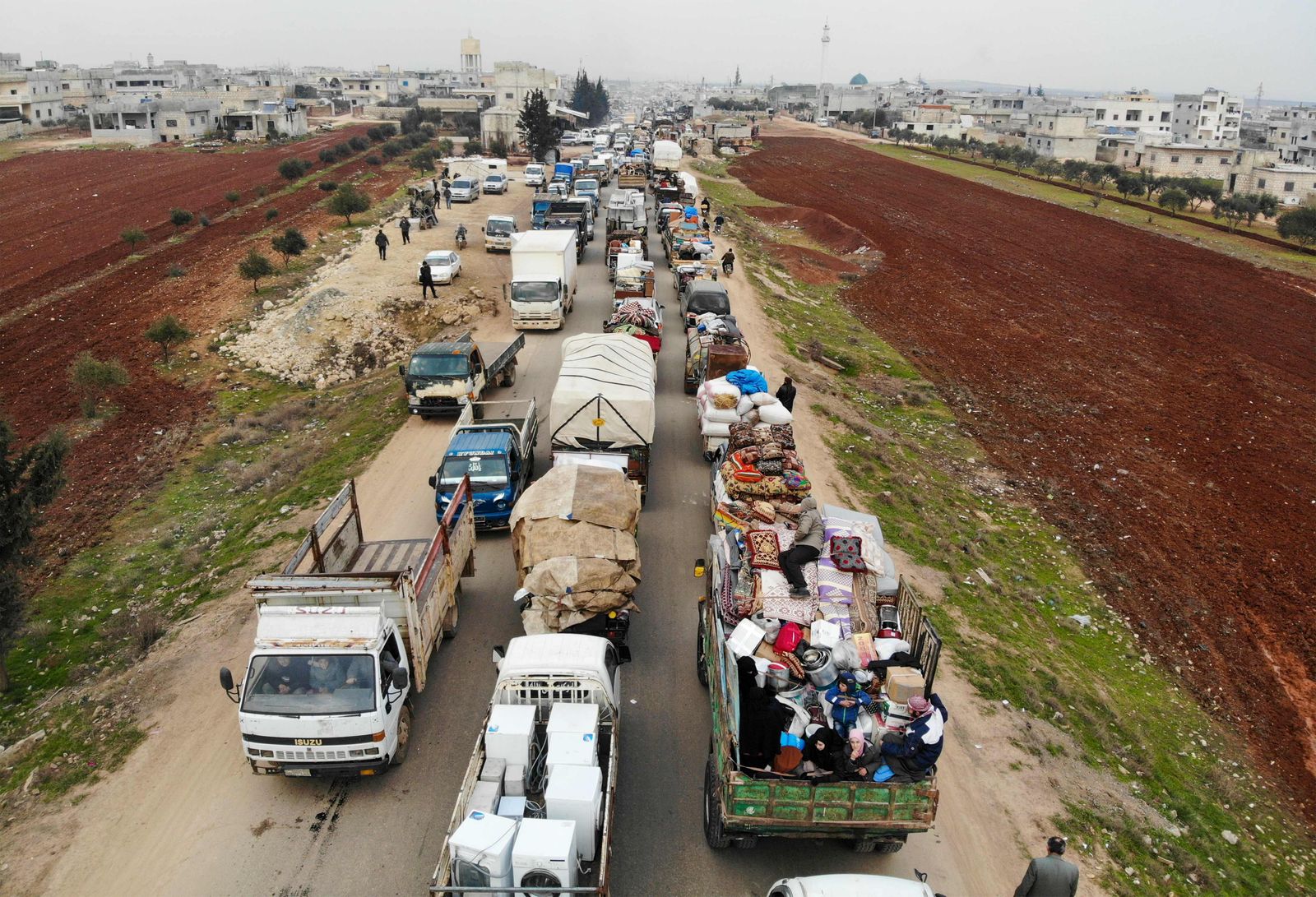 Displaced Syrians drive through the northern countryside in Idlib province.