Fear of his enemies was the primary reason for Bashar Assad's call for help to Moscow. "But right after that came the fear of his friends," says a Russian official who long worked in his country's embassy in Damascus. The friend he refers to is Iran, the Syrian regime's most important protector.

"Assad and those around him are afraid of the Iranians," the Russian says. Anger over the arrogance of the Iranians, who treat Syria like a colony, is also part of it, the Russian continues. Most of all, though, the Syrians "mistrust Tehran's goals, for which Assad's position of power may no longer be decisive. That is why the Syrians absolutely want us in the country."

What the Russian diplomat, who wants to remain anonymous, has to say is a bit jarring at first. Without the Shiite auxiliaries from Iran, Afghanistan, Pakistan, Iraq and Lebanon -- whose recruitment and transfer is organized by the Iranian Revolutionary Guard -- Assad's rule would long since have come to an end. Yet his comments are complemented by a number of additional details that add up to an image of a behind-the-scenes power struggle -- one which casts a new, scary light on the condition of the Syrian regime and on the country's prospects as a whole.

The Iranian Revolutionary Guard has long planned and carried out the most important missions and operations of the Syrian regime. They were responsible, right down to the details, for the sporadically successful offensives in Aleppo in the north and Daraa in the south, which began in 2013. In Iran, the Revolutionary Guard is one of those groups intent on continuing the "Islamic Revolution" -- the victory of Shiites over the Sunnis. They are a state within a state, one which owns several companies and is answerable only to Iran's Supreme Leader Ali Khamenei. President Hassan Rohani has no power over the Revolutionary Guard whatsoever.

Their goals go far beyond merely reestablishing the status quo in Syria. In early 2013, Hojatoleslam Mehdi Taeb, one of the planners behind Iran's engagement in Syria, said: "Syria is the 35th province of Iran and it is a strategic province for us." For several decades, the alliance between the Assads and Iran was a profitable one, particularly in opposition to the Iraq of Saddam Hussein, which long had the upper hand in the region. But today, Assad depends on Iran to remain in power, and Tehran is taking advantage of the situation.

Using a variety of pathways, both civilian and military, Tehran is currently in the process of establishing itself in Syria. Military means are being employed to strengthen the holdings of the Shiite militia Hezbollah in areas near the border with Lebanon. To serve this goal, the Syrian National Defense Forces were established, troops that exist alongside the regular Syrian army and which includes tens of thousands of fighters who were trained in Iran. Still, the National Defense Forces have begun to disintegrate into local mafia militias and have actually accelerated the loss of state control over those regions.

It is, however, primarily in the civilian sector where significant changes are afoot. Just as in Damascus, Latakia and Jabla, increasing numbers of hosseiniehs -- Shiite religious teaching centers -- are opening. The centers are aimed at converting Sunnis, and even the Alawites, the denomination to which the Assads belong, to "correct" Shiite Islam by way of sermons and stipends. In addition, the government decreed one year ago that state-run religion schools were to teach Shiite material.

All of this is taking place to the consternation of the Alawites, who have begun to voice their displeasure. "They are throwing us back a thousand years. We don't even wear headscarves and we aren't Shiites," Alawites complained on the Jableh News Facebook page. There were also grumblings when a Shiite mosque opened in Latakia and an imam there announced: "We don't need you. We need your children and grandchildren."

In addition, Iranian emissaries, either directly or via middlemen, have been buying land and buildings in Damascus, including almost the entire former Jewish quarter, and trying to settle Shiites from other countries there.

Talib Ibrahim, a Syrian journalist from the Alawite community who fled to the Netherlands many years ago, summarizes the mood as follows: "Assad wants the Iranians as fighters, but increasingly they are interfering ideologically with domestic affairs. The Russians don't do that."

That's why Assad has now decided to place his fate in the hands of the religiously unproblematic Russia, which last week transferred aircraft and troops to its military base in the northern Syrian town of Latakia and began flying airstrikes. The fight against the Islamic State terror militia served as a pretext for the operation, but the initial air strikes have not targeted the Islamists at all. Rather, they have been flown against areas controlled by Syrian rebels.

It is, however, questionable whether Iranian influence in the country can be reversed. Negotiations in the Syrian city of Zabadani serve to demonstrate just how far the "Iranian project" has advanced. The city northwest of Damascus, which has been surrounded for three years now, is strategically important for the Shiite militia Hezbollah. Held by rebels, Zabadani represents the last significant hurdle standing in the way of Hezbollah's plan to bring the entire Syrian border region surrounding Lebanon under its control. At the beginning of July, Hezbollah began a large-scale offensive against Zabadani. In response, rebels in Idlib laid siege to, and began firing on, the villages Fua and Kafraya, where more than 10,000 members of the Shiite minority live. Tehran then stepped in and began negotiating directly with the Syrian rebels, including the Nusra Front. The leadership in Damascus was not involved in the talks.

A deal was reached that went much further than anything that Assad has ever agreed to with the rebels. But it is explosive. It demonstrates that the Iranians no longer believe in an Assad victory, and it shows that the country's partitioning has begun, including confessional cleansing.

The cease-fire calls for all Sunnis currently living in Zabadani to leave the city in the direction of Idlib. In return, the Shiites in Fua and Kafraya will be allowed to resettle to the south. The cease-fire would be valid in a whole series of towns and villages in the area and the deal calls for the region's airspace to be made off-limits to the Syrian regime's jets and helicopters as a kind of local no-fly zone.

It is a deep encroachment on the regime's autonomy and Assad is doing all he can to resist the implementation of the deal, which also involves the release of 500 prisoners.

The tumult Iran's meddling has unleashed within Assad's circle has hardly reached the outside world. But some of the regime's most powerful figures -- those who have opposed Iran's power plays -- have disappeared recently, some of them amid rather odd circumstances.

Last December, General Rustum Ghazaleh, head of the Syrian Political Security Directorate, had his own estate just south of Damascus blown up and also had the event filmed. The video, backed by melodramatic music and pledges of allegiance to Assad, was then posted online. Not long later, Ghazaleh was beat to death by henchmen from the Syrian secret service, two Iranians among them. The reason: Ghazaleh's resistance to the Shiite militias, with whom he had refused any kind of cooperation. The Iranian's had allegedly wanted to use his villa as its headquarters, which is why Ghazaleh had it destroyed.

In July, it was the turn of General Dhu al-Himma Shalish, the decades-long head of the Presidential Guard and a close relative of Assad's. Syrian state media reported that corruption was the reason for his abrupt demotion. It is a rather curious claim, given that Shalish was not just corrupt. He was the epitome of corruption, involved in real estate, drugs and weapons. Furthermore, he was the key figure in the enormous illegal trade regime which saw hundreds of millions of dollars' worth of weapons and technology being smuggled via Syria to Baghdad in violation of the embargo then in place. The illegal trade was partly discovered by the US in 2003, and brought the Assad regime closer to collapse from external pressure than at any time in the previous 30 years.

At the time, nobody within Syria seemed particularly concerned by General Shalish's illegal activity. Thus, his recent demotion would seem to have little to do with his corrupt business practices and more to do with his role as head of the Presidential Guard.

The two examples show the extent of the Iranian pressure being exerted on Assad -- to the point that he can no longer even protect his closest confidants. And that could ultimately become dangerous for him.

"Since Shalish's departure, the Iranians have direct, physical access to Bashar," says a European diplomat with long-time contacts to Damascus. Assad is now being protected by the Iranians and they could easily get rid of him if they wanted.

The troops from Moscow put Assad in a slightly more comfortable position. He can now, to a limited degree, play off his two protective powers against each other and continue his campaign against his own country. It is one that he won't win, but he also won't lose it in the immediate future. 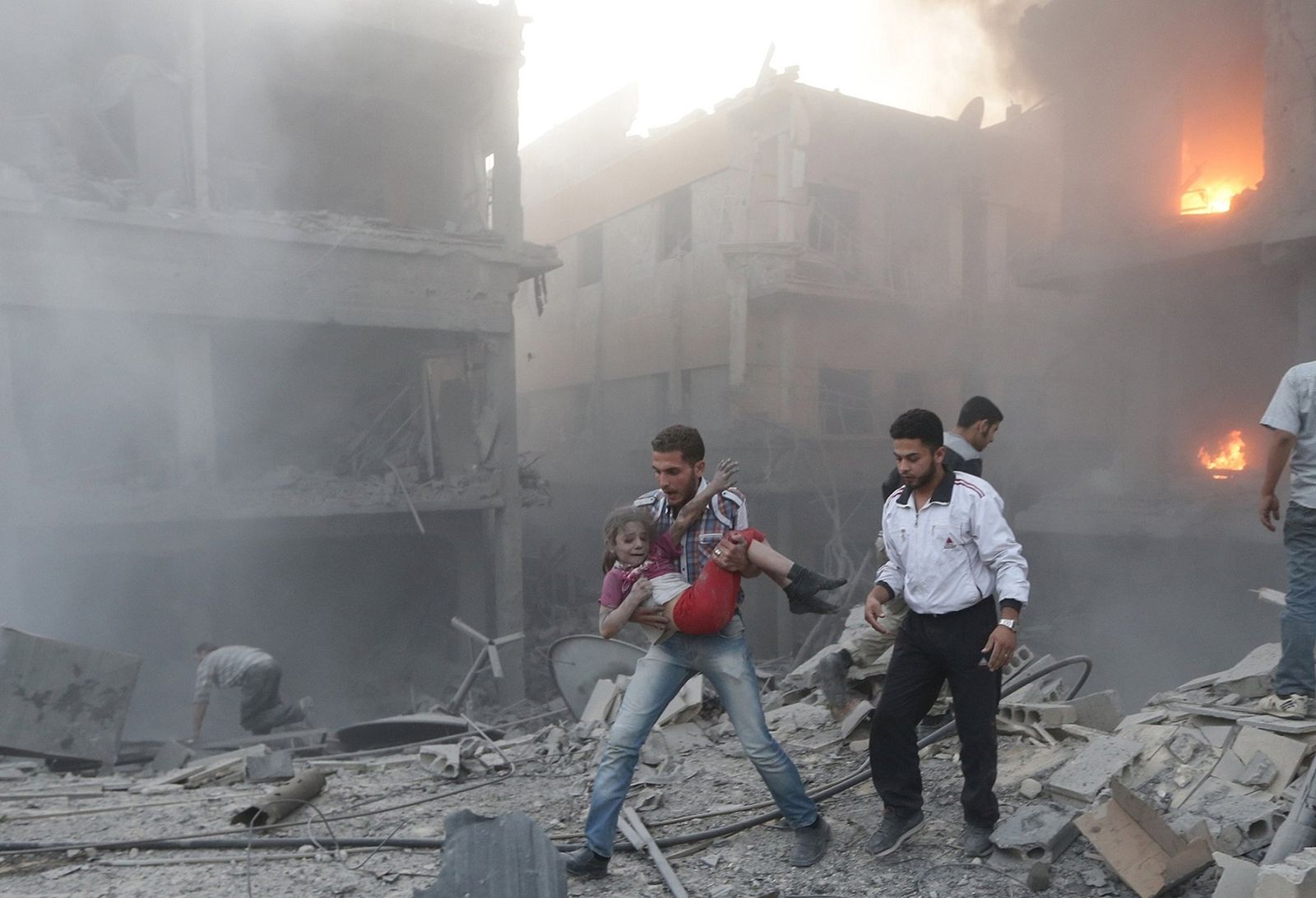 A man carries a girl in the Douma quarter of Damascus following shelling by regime troops. 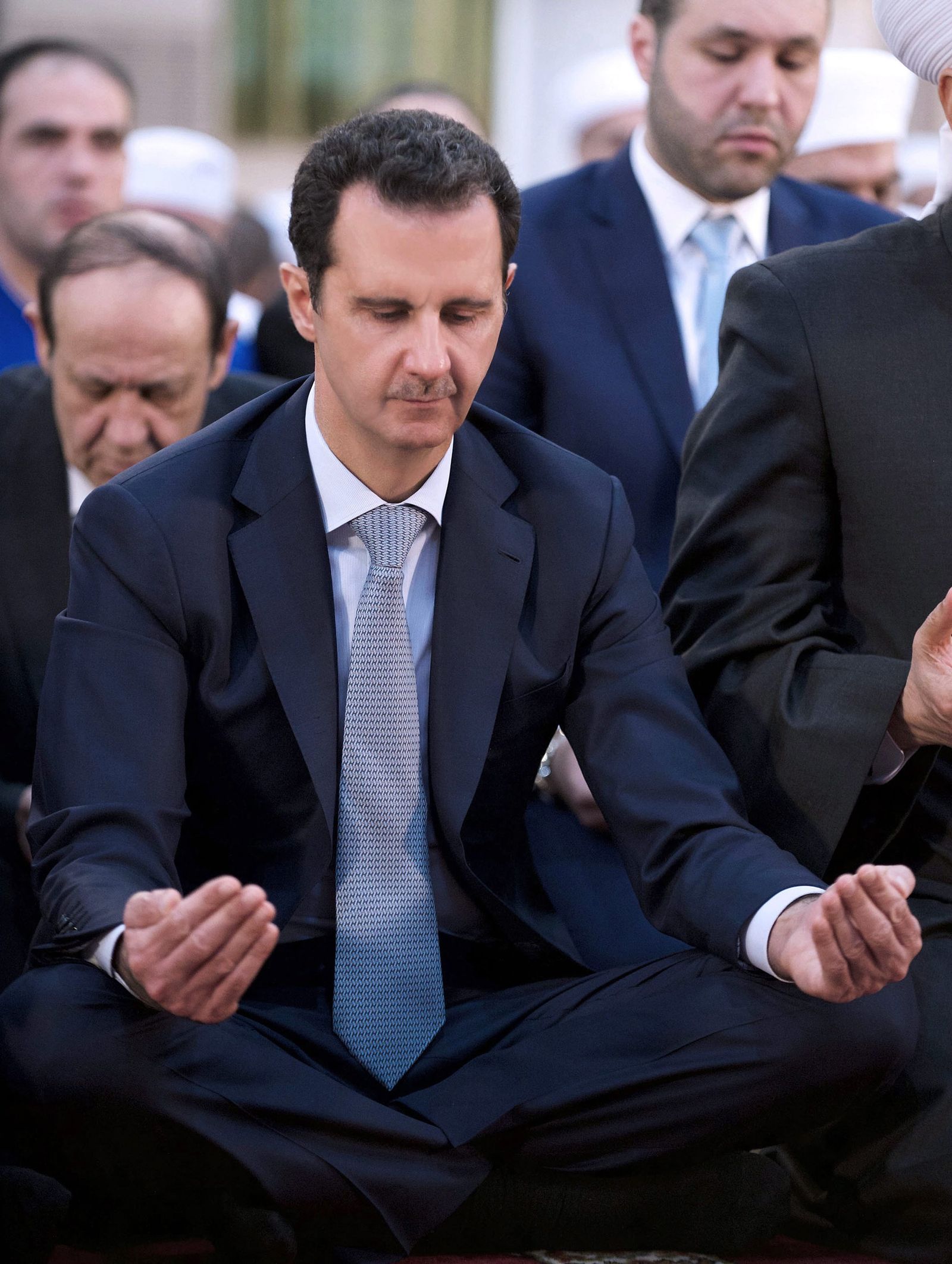 Syrian President Bashar Assad is seen during prayers in Damascus in September 2015: The Iranians could easily get rid of him if they wanted to.