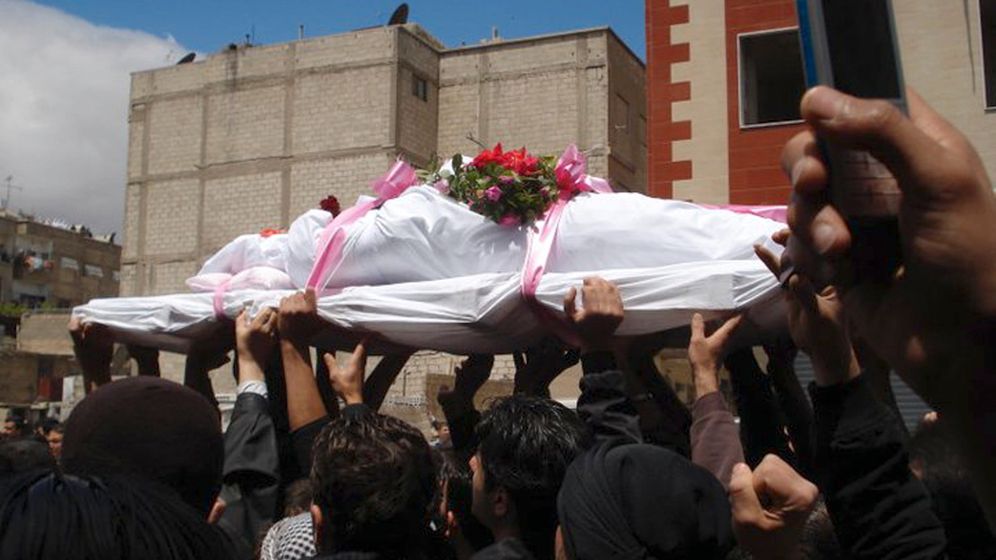 The images, as blurry and shaky as they are, can no longer be erased. They are mobile phone videos taken by demonstrators who, after 30 years of total silence, suddenly find themselves at war with their government. Two men can be seen lying on the ground while half a dozen troops beat them. Soldiers kick them with their boots while armed security forces patrol nearby.

These are images that most Syrians only know from Gaza or the West Bank, from Iraq and Afghanistan -- not from the police state in which they grew up.

Up until a few days ago, these images came primarily from Daraa on the Jordanian border, where the ongoing uprising against the ruling clan of Syrian President Bashar Assad began. In the meantime, similar footage has been coming from Latakia and Baniyas on the Mediterranean coast, from Aleppo in the northwest and, since Sunday of last week, from the industrial city of Homs near the Lebanese border.

Now, these images are on the Internet, thanks in large part to people like Abdulrahman Hanoun, an engineer and Facebook activist of Syrian origin who lives in the southern German town of Ansbach. Hanoun and many of his relatives were expelled from Syria in the 1980s. Some of them were supporters of the banned Muslim Brotherhood, which suffered bloody persecution under Bashar Assad's father, Hafez Assad. Tens of thousands of them fled the country at the time, and many emigrated to Germany.

Hanoun prays five times a day, and his wife wears an Islamic headscarf, but he says that he has nothing in common with the radical ideas of the Islamists. He contends that he is fighting "for a secular state governed by the rule of law, in which religion is a private matter."

Those who support the Syrian regime don't believe him. Many of them also live in Germany, like Salem El-Hamid, a German-Syrian pediatrician who works at a clinic in the town of Gummersbach near Cologne who is the general secretary of the German-Syrian Society. El-Hamid talks on the phone every day with people he knows in Damascus, Homs and Latakia. He warns that the West is "naive" if it believes that the demonstrators are only aiming for freedom and democracy. "They don't want reforms, they want a religious state," he says.

The images tell their own story. They show a government that has resorted to brutal means to smother this revolt, which it never believed could materialize. Although Assad came to power 11 years ago as a reformer, he has used the security apparatus to cement his rule, just as father did. Over 300 people have been killed since the unrest began.

The authorities sharply escalated their campaign against the protests on Monday, when soldiers supported by tanks and snipers entered the city of Daraa. Witnesses said at least five people were killed and dozens arrested. Syria has now closed the border to Jordan, which is just a few kilometers from Daraa.

There have been dozens of deaths in recent days, with at least 13 people reportedly killed in the city of Jableh on Sunday. A leading Syrian human rights activist told the news agency Reuters on Monday that the authorities had launched a "savage war designed to annihilate Syria's democrats."

In contrast to Tunisia's Zine El Abidine Ben Ali and Egypt's Hosni Mubarak, Assad, with his comparatively liberal ideas, was seen as someone who had a chance of surviving the Arab spring. But he missed his opportunity to legitimize his rule with genuine concessions.

Right when the demonstrations first erupted, for instance, he could have stripped all political power from his cousin, Rami Makhlouf, a businessman with a fortune worth billions, who is widely viewed as a symbol of Syria's rampant corruption. Instead, Assad removed Makhlouf's main rival -- Deputy Prime Minister Abdullah Dardari, one of the country's few credible economic reformers.

On March 30, the president disappointed Syrians and the international community when he held a speech that was almost provocative in its lack of substance. Last week, he lifted the state of emergency that had been in place since 1963, but indicated that he intended to replace it with a similarly totalitarian anti-terror law. "This sealed his reputation as the eternal proclamation president -- and thus his downfall," said a Western diplomat with intimate knowledge of the situation on the ground in Syria.

Virtually none of his neighbors are hoping for this downfall. Even serious opponents in the West -- and in Israel -- are looking with fear at the abyss that is opening up in Damascus. No matter how brutally the Syrian regime may oppress its people, it might not be such good news for the region as a whole over the medium term if the Assad clan were toppled.

There is no doubt that the Syrian leadership is in league with Iran and Hezbollah, and that the highest-ranking officials in the radical Islamist Palestinian group Hamas reside in Damascus. Yet compared to other countries in the Middle East, the Assad regime is practically a model of predictable foreign policy. Since 1973, not a single shot has been fired on the Golan Heights, which were seized by Israel during the 1967 Six-Day War, and commentators in Tel Aviv even refer to Assad as "Israel's favorite autocrat." Furthermore, its neighbor Iraq envies the fact that Muslims and Christians as well as Druze, Arabs, Kurds and Circassians live, for the most part, in peaceful coexistence in Assad's multi-ethnic and multi-confessional state.

The violence and civil war that has plagued Iraq could also befall Syria if its government crumbles. Syria's Sunni majority, which would presumably then come to power, would probably free itself from Shiite Iran's embrace and seek a new, strategic partnership with Sunni-oriented countries like Saudi Arabia and Turkey. The currently ruling Alawis, who make up less than 10 percent of the population, would have a hard time of it, and many would flee the country and head for Lebanon.

In any case, the German-Syrian Abdulrahman Hanoun, who sympathizes with the moderate Sunni faction of the Muslim Brotherhood, looks to the future with confidence. "In a few months, I will spend my first vacation back in the home country with my family, which is currently scattered around the entire world," he says. 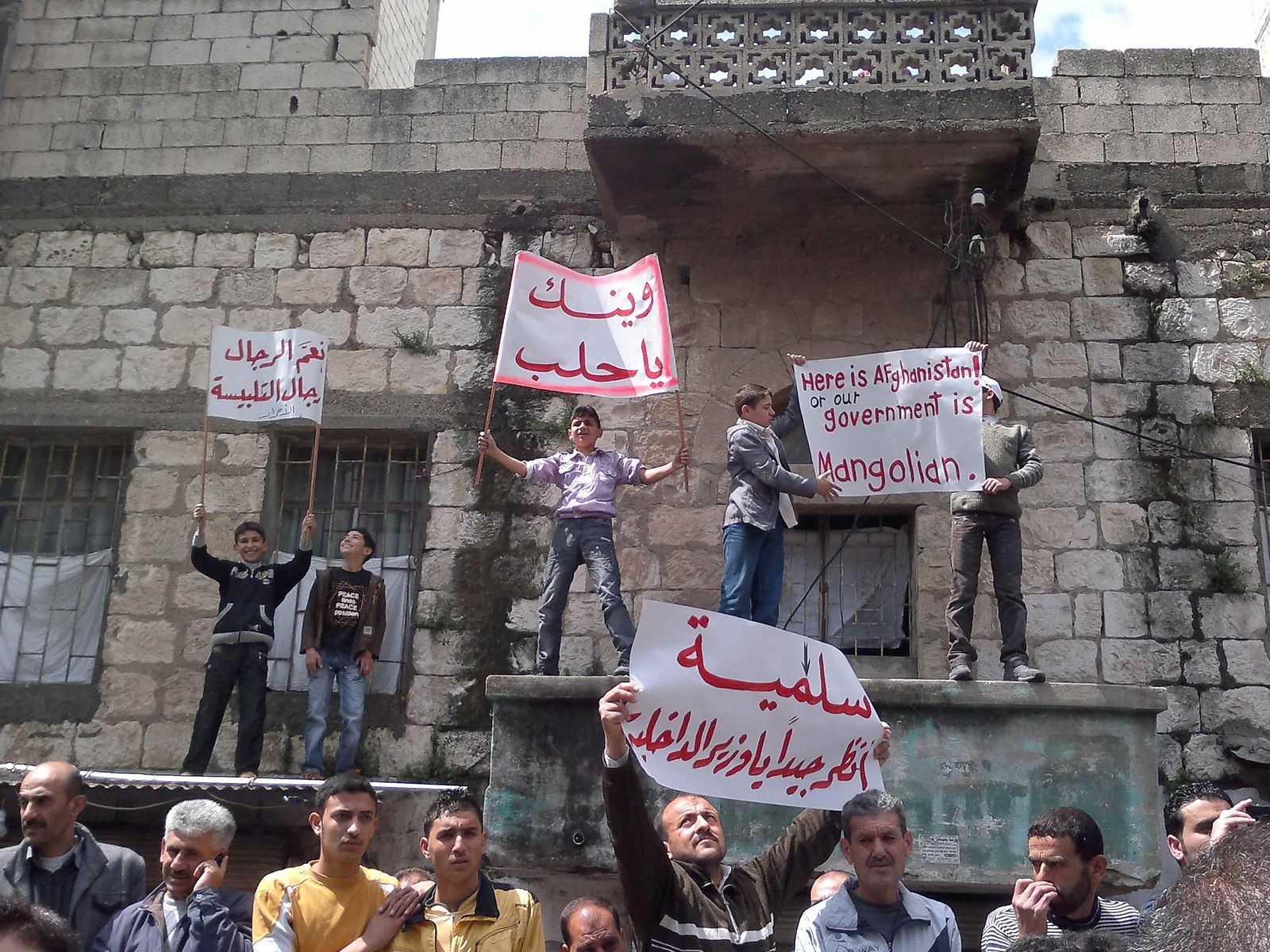 Protesters in the Mediterranean port city of Baniyas demonstrate on Friday, the bloodiest day so far in five weeks of intensifying clashes between citizens and state security forces. One banner reads, "Look interior minister, it's peaceful."