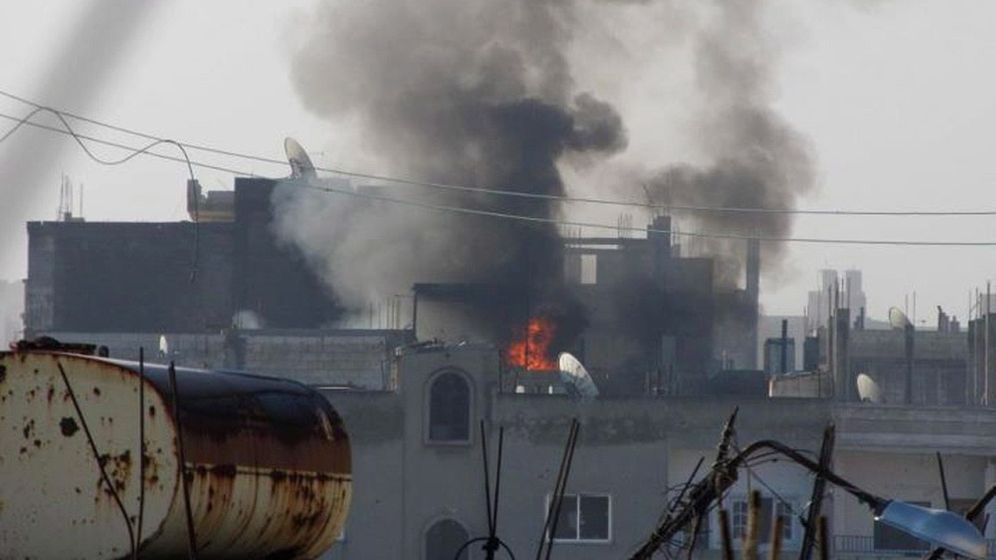 Photo Gallery: A Fight for Survival in Homs

"We can't recover them. Both of their bodies are lying in the doorway. But, if we go to get them, we'll be shot by the snipers!" For a few minutes on Wednesday, it was possible to reach Omar Shakir in Homs, the stronghold of the Syrian resistance. Shakir is one of the rebels' spokesmen in the city's Baba Amr district, where the American journalist Marie Colvin and French photographer Rémi Cochlin had been killed by Syrian government shelling at around 7:30 that morning.

They had been in the back of the apartment serving as the "media center" when the first missile shook the room. "We wanted to move to another building, but the shelling was constant," Shakir says. "Then there were two minutes of quiet, and they ran -- and were hit by the next round of fire, which struck the building's entrance. Both of them died immediately."

This was the same building that SPIEGEL reporters worked in for a week last December, when Baba Amr become the first liberated zone in central Syria. Soldiers who had defected from the Syrian army to join the Free Syrian Army (FSA) defended the run-down neighborhood in the southwest part of the city from troops loyal to the regime. At the time, SPIEGEL described it as an area of three square kilometers (one square mile) under a state of emergency. Still, things were quieter there than in other parts of the city, where reporters described how government snipers were hunting people down, how the wounded were being killed rather than treated in state hospitals and how Assad's troops were starting to starve entire sections of the city.

In the meantime, things have gotten much worse in Homs.

Since February 4, several districts in the west and north of the rebel stronghold have been under constant bombardment from tanks and rockets. Shells batter homes every few minutes or sometimes even seconds. They either kill the last remaining residents immediately or leave them to die slowly since there is no longer anyone who can come to their rescue. Snipers on nearby high-rises take aim at everyone they get in their sights.

The epicenter of this horror is Baba Amr. Streets there are reduced to heaps of rubble. The surviving doctors work without pause beneath the small mosque they evacuated to after their previous clinic was bombarded. They amputate legs and arms without anesthesia; they have hardly any medication or bandages left, let alone blood for transfusions. And they no longer know what to do with all the dead bodies.

Increasingly little word was coming from the surviving activists in the "media center," which was moved from the third to the first floor of a residential building. In December, it was a place of hope. Telephones sitting between countless computers were ringing throughout the night while students uploaded videos of the latest demonstrations.

But now there's no electricity, no phone connection, no water. Snipers have shot up the water tanks on the roofs, and the last diesel fuel is being saved for the generator that powers the satellite phone.

Last week, this sole mode of communication was interrupted for six days. Not until Tuesday were Omar Shakir and the others able to relay the news that they were still alive. It's "a miracle," Shakir says, that the satellite dish on the roof is still standing. He says that only few hundred, or perhaps just a few dozen, FSA fighters are still in the neighborhood, powerless against the vehemence of the tanks.

When the shells hit on Wednesday morning, other Western journalists were injured besides Colvin and Ochlik. The British photographer Paul Conroy suffered a severe leg injury, and the French reporter Edith Bouvier suffered a compound fracture to her left leg.

For the moment, both are in the underground hospital in Baba Amr. "But if we don't get Edith out of here, she won't survive," says Dr. Mohammed. "She needs to be operated on immediately; she needs a blood transfusion and medication." They are threatened with the same fate of hundreds of Syrians who are slowly dying because they can't be treated. Perhaps 50 or 100 people died in Baba Amr on Wednesday alone, when the shelling by Assad's forces started hitting the lower floors of the neighborhood's houses with increasing frequency.

More than 20,000 people -- mostly women, children and the elderly -- are still trapped in their houses in Baba Amr. They chose not to flee back when it was still possible to escape by foot. Hardly any of the houses have basements, it's bitterly cold, there's no more water, and no food is reaching the neighborhood. Those still living in Baba Amr are at the mercy of the shells that Marie Colvin heard striking 14 times in 30 seconds on Tuesday, during her last interview.

"What's happening here is genocide," says Shakir, who has to repeat himself on the phone often because the explosions are drowning out his voice. "Assad wants to wipe Baba Amr off the map. He thinks people would then give up."

5 Bilder Photo Gallery: A Fight for Survival in Homs