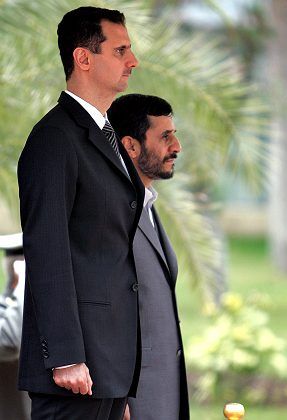 Things are taking a dramatic turn in Syria these days, just as a team of United Nations nuclear weapons inspectors arrives to probe allegations that Damascus is hiding secret atomic activities. And as information emerges that Syria may have been cooperating with both Iran and North Korea on the development of nuclear weapons.

Yet even as pressure increases on Damascus, many Western leaders see a chance that Syrian President Bashar Assad may sever contacts with Iran. Indeed, some say that Assad's decision could determine whether or not a new war in the Middle East could be on the horizon.

Assad, as a result, is being courted as never before. German Foreign Minister Frank-Walter Steinmeier is pursuing talks with the Syrian leader. French President Nicolas Sarkozy has invited him to Paris and even the usually critical Bush Administration would like to improve contacts. Meanwhile Israeli Prime Minister Ehud Olmert has made it clear that he wants to intensify peace talks with Damascus, and is no longer refusing to discuss the issue of the Golan Heights, seized by Israel during the six-day war in 1967.

The background to this surprising flurry of diplomatic activity is the fact that, according to intelligence reports, Syria has been working alongside North Korea for years to support Iran in the development of a military nuclear program. However, there are strong indications that Assad is now rethinking this policy.

According to intelligence reports seen by SPIEGEL, the Syrian facility at Al Kibar that Israeli jets bombed last September was the site of a secret military project. The report states that North Korean, Syrian and Iranian scientists were working side by side to build a reactor to produce weapons-grade plutonium. Sources say that the Iranians were using the facility as a "reserve site" and had intended sending the material back to Tehran. While the Iranians had made great progress in the development of uranium, it is alleged that they required the help of the North Korean experts when it came to plutonium technology.

Iran, Syria and North Korea are also alleged to have cooperated on the production of chemical weapons. Indeed, in July 2007 an explosion near the Syrian city of Aleppo killed 15 Syrian military officials as well as dozens of Iranian rocket scientists and, according to information obtained by SPIEGEL, three North Koreans. According to Jane's Defence Weekly, the accident released quantities of mustard gas and the nerve agent Sarin.

Meanwhile weapons inspectors from the International Atomic Energy Agency (IAEA) arrived in Syria on Sunday to investigate whether the bombed site at Al Kibar was in fact a nuclear facility, something Damascus has vehemently denied. Although the inspectors face strict limits on where they can go, the fact that Syria is allowing the inspectors in at all is a sign of something of a thaw between Damascus and the West.

Assad's attitude seems to have become far more conciliatory. As well as allowing in the IAEA team, he has used his contacts with Hamas to persuade the Palestinian militant group to call a six-month cease-fire with Israel in Gaza. And he has used his influence to rein in Hezbollah militants in Lebanon. The fact that he has said he would consider opening an embassy in Beirut is also a significant sign that Syria is at last recognizing Lebanese sovereignty after years of treating the neighboring state as little more than a province.

Assad's moves are now being rewarded, with the West welcoming anything that would further isolate Tehran. Sarkozy has invited the Syrian leader to visit Paris for Bastille Day, when Israel's Prime Minister Olmert will also be in attendance. The French president has one precondition: He has demanded that "Syria break as much as possible with Iran in its quest to develop a nuclear weapon."