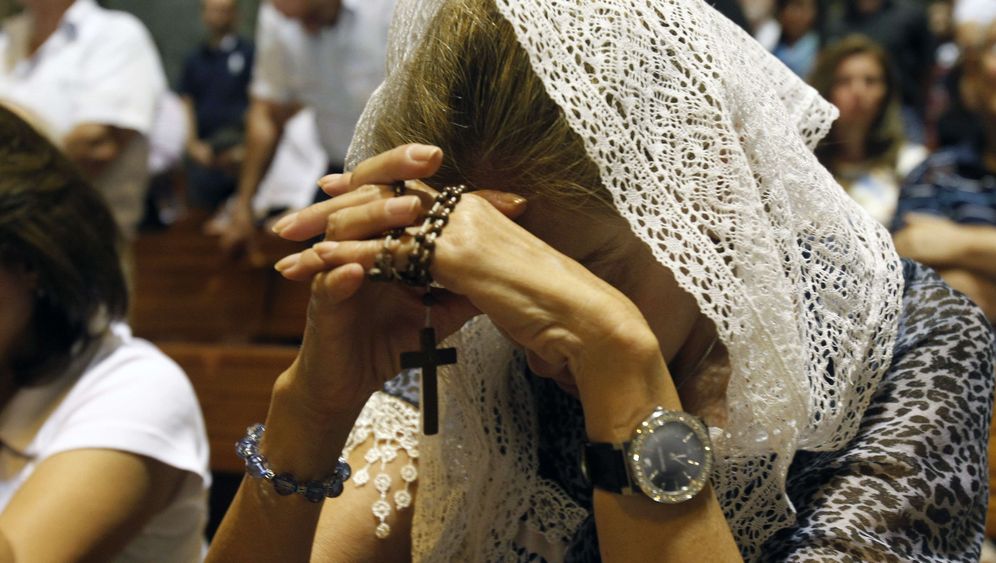 They have followed the Pope's call to pray for Syria. But some do not seem entirely convinced. "Look, there aren't even any special security precautions, I don't believe it!" says the young Lebanese woman, as she climbs the stairs to the cathedral in Harissa. The hilltop village lies about 30 kilometers north of Beirut and hosts a famous pilgrimage site, Our Lady of Lebanon. It is considered one of the country's landmarks. The 13-ton white statute is visible from miles around.

Security personnel checking pockets and bags are indeed conspicuous in their absence, these days in Lebanon, where people live in the shadow of the big neighbor Syria. Bombings are also becoming more frequent in Lebanon. So far, the attacks have been targeted at Sunnis and Shiites, but Christians are particularly nervous. They're concerned at the increasingly Islamist tone of the rebels in Syria. They think their way of life will be in danger sooner or later.

In the parking lot in front of the cathedral are four friends, Tony, Jenny, George and Mark. They do not want to give their surnames. They are a bit uneasy talking to Western journalists. The three men are wearing neatly ironed shirts, Jenny a short summer dress. They have come with their families to answer the Pope's call. "We want to pray for Syria. Apart from that, we cannot do anything," says George.

The four are Syrian Christians and know each other from Aleppo, where they were neighbors. Some 14 months ago, when the Syrian civil war reached their town, they each packed a large suitcase and took the next flight to Beirut. Two or three months later, the next big wave of their former neighbors arrived from Aleppo, Jenny says. All of them Christians. "Anyone who could, left," she says.

A Threat to Their Good Old Life

Most Christians, in Lebanon as in Syria, oppose the Syrian rebels. Tony, Jenny, George and Mark resolutely support President Bashar Assad. Before the uprising the four friends were part of Aleppo's upper class. For them, the rebels are barbarians threatening the way they live. It is a perspective that they share with upper class Sunnis.

Many Christians find themselves once again caught in the middle. In Lebanon, not all of them are completely supportive of the Syrian regime. Too many of them had bad experiences with the Assad clan during the Syrian occupation of Lebanon from 1976 to 2005. But the rebels are not an alternative for them. They look upon the potential US military intervention with mixed feelings. Tony, George, Mark and Jenny completely oppose it.

"The world must prevent America from bombarding the Syrian army," says George. "These are our soldiers. They fight for us against the terrorists."

Jenny has found a job in Lebanon as head of a school for Syrian refugees. George, Mark and Tony live on their savings. All three were pharmaceutical drug manufacturers. Before the war, Aleppo was known for its pharma industry. "Our house is still untouched," says George, "but my warehouses were looted." "We have all lost our businesses," says Tony.

"When was Lebanon Ever Stable?"

The four Syrians do not feel completely at home in Lebanon. None of them have Lebanese friends; they hang out with each other. Many Lebanese people resent the millions of Syrians who have come to the small country to flee the war, says George.

Tony fears more violence. "When was Lebanon ever stable?" he asks. "We just want a place where our children can grow up in safety," says Jenny.

If the four could, they would gladly move to the West with their families. But they do not have the necessary visas. The immigration policies of some European countries, among them Germany, give preference to Christians over other Syrians when it comes to asylum, but they are skeptical.

"This is an attempt by the Europeans to drive a wedge between us and our government," says Jenny. "They want to turn us Christians against Bashar Assad, but we will not. Bashar protects us."

Speaking the Language of Jesus

"We have heard what happened at Maalula," says George. He firmly believes the terrible stories that are being told about the ancient Christian city. A few days ago, rebels briefly advanced into the center of Maalula. The city, along with some adjacent Sunni villages, is one of the few places where Aramaic, the language of Jesus, is still spoken.

Maalula provides an example of how Christians are being exploited in the Syrian civil war. Shortly after the rebels marched in, the Syrian state broadcaster reported that they desecrated the churches and destroyed shrines.

But then a senior nun at the Thekla Convent in Maalula contradicted the reports and said the rebels had not damaged the shrines. A Christian resident told the Reuters news agency: "We must remain fair. They do not seem to have looted churches or houses." In video footage showing the city and rebels after the occupation, no damage to the churches can be seen.

For several days now, the Syrian army has been deployed in Maalula with tanks and artillery. Damascus will pin the blame for the resulting damage on the rebels and they in turn will blame the regime.

Both sides in the Syrian civil war know how important the Christians' situation is in influencing the mood in the West. Therefore, the regime regularly devises horror scenarios of desecrated churches and massacred Christians -- while the Syrian opposition draws up lists of the churches damaged by shelling from Assad's military and accuses the regime of kidnapping bishops. Amid the turmoil of war and the polarized atmosphere, who is responsible for what is a question of political faith.