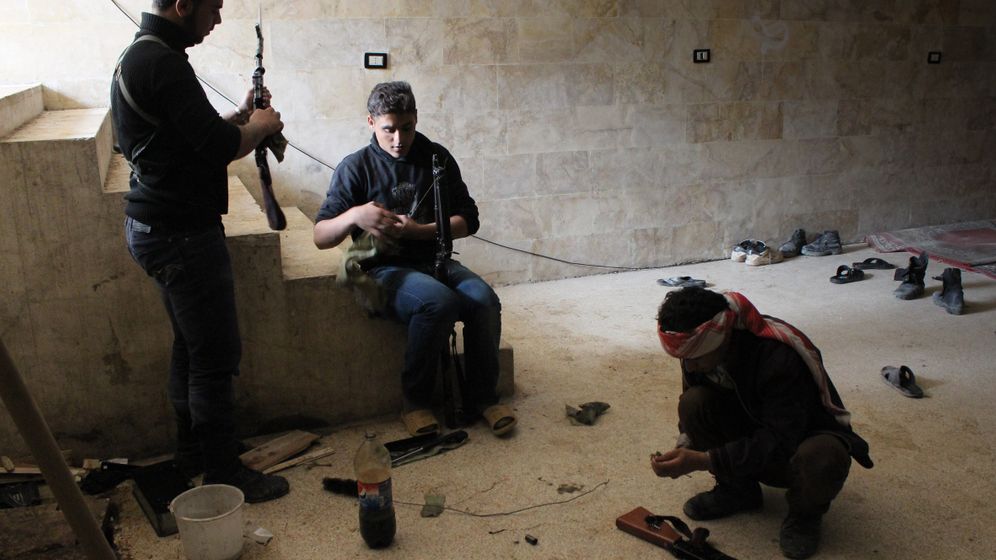 The rebels didn't hesitate long after capturing a checkpoint near Sarakib, southwest of Aleppo, on Nov. 1. They rounded up the surviving soldiers and militia members fighting on behalf of Syrian President Bashar Assad's regime, made them lie on the ground and shot them to death. At least eight men -- or 11, according to other sources -- were killed.

The "Syrian Observatory for Human Rights," a small human rights group based in Great Britain that is trying to keep track of the dead on both sides, called the act a "massacre." But the victims weren't the only Assad supporters to be murdered by rebels.

When the Syrian opposition established a new coalition last week, Amnesty International sent an appeal to its political leadership urging them to prevent more possible war crimes like the killings in Sarakib. There is also disagreement over the issue within rebel groups. "Revenge is the religion of cowards," said opposition members from the city of Masyaf, in an indictment of their brutal comrades from Sarakib. "That's not why we began the revolution. This behavior is disgusting."

The perpetrators, though, would seem unlikely to agree, as the manner in which the world learned of the apparent executions shows: The rebels filmed themselves and subsequently posted the video on YouTube. The comments on the video include both sharp criticism and approval.

The Sarakib murders highlight paradoxical developments underway as the war drags on. On the one hand, rebel units belonging to the Free Syrian Army (FSA) are becoming increasingly organized. At the same time, new, unmonitored rebel groups are giving free rein to their hatred in desolate, sparsely populated parts of the country. While committees of lawyers are beginning to routinely monitor the FSA-run prisons, other rebels are simply shooting their prisoners on the side of the road. Incidents of growing brutality exist alongside equally numerous attempts by the rebels to avoid becoming like the Assad regime they are fighting.

Thrown from the Roof

The circumstances are rarely as clear as with the Sarakib massacre. What began as a peaceful uprising against the dictatorship in Syria has turned into an extremely brutal war, in which only a handful of foreign journalists are able to observe what is actually happening. Nevertheless, the web is filled with thousands of videos and mobile phone photos, often gruesome, and almost always blurred and shaky. They can be used to support any assumption and any cliché, because no one can verify what exactly the videos show.

Even when serviceable recordings exist, it is often difficult to clarify the events depicted. In mid-August, for example, a shaky video surfaced on the web that showed a group of people cheering as bodies were thrown from the roof of a multistory building. The video was made in al-Bab, a small town in Aleppo Province.

It is a horrific document, one Russian broadcaster Russia Today used it to demonstrate why Moscow must support the Assad regime. It seemed to clearly show rebels killing government employees. As Russia Today portrayed the incident, the bodies that were being thrown from the roof of the post office building were those of innocent postal workers.

The building was indeed the postal service headquarters, the tallest structure in the small city. But the bodies being thrown from the roof were in fact those of several snipers who had terrorized residents for weeks from their perch high above the town. This, at least, was the outcome of an on-site investigation conducted by Human Rights Watch.

Only at the end of the fighting for al-Bab did rebels manage to surround the snipers, kill them and throw their bodies from the roof. It was still barbaric, but it wasn't what the Russian television producers were trying to lead their viewers to believe.

The monstrosity of the regime, it would seem, has shifted moral standards. Assad's units often massacre the residents of entire blocks, as they did in late August in the Damascus suburb of Daraya, where hundreds of bodies were recovered. Some of Assad's men have now taken to cutting off their victims' ears as trophies. Many Syrians have thus begun to find it normal and understandable for rebels to take an eye-for-an-eye approach, abusing members of the brutal Shabiha militias, in particular, and killing those who have already killed others.

This helps explain why many rebels were unable to comprehend the overseas outrage triggered by a video similar to the one from Sarakib that appeared on the web on July 31. It shows rebels shooting and killing at least four men belonging to the Berri clan in Aleppo, a mafia family which had assembled a pro-Assad militia. Immediately prior to the assault on his fortress-like estate, clan leader Saino Berri had broken a previously negotiated cease-fire with the FSA by killing 15 rebels.

Killing the Berri fighters "was certainly a mistake," General Abdel Jabbar Al Okaidi, one of the FSA commanders in Aleppo, later admitted in an interview. "We shot the gangsters who had previously murdered dozens of people. But how does that compare to the bombardments and the thousands of dead?"

Western reporting on the fighting in Syria has lost its symmetry. Because both sides are shooting at each other, the feeling that each party to the violence must be assessed in the same way has become widespread. In a report published on the situation in the country in September, for example, Amnesty International sharply criticized the large-scale air strikes and the shelling of villages and cities with tanks and mortars perpetrated by the Assad regime. But then, in a single paragraph, the report accused rebels of using poor-precision weapons in residential areas and thus endangering civilians. The report gave rise to the following headline on the website tagesschau.de: "Amnesty Levels Serious Charges against Both Sides."

Moreover, the fighting in Syria has already been going on for so long that the regime's brutality is simply no longer seen as news. For months, the army and the air force have been bombing 60 to 200 towns and villages a day, and hundreds of civilians die every week. Last week, more than 40 people were reportedly executed by firing squads in the suburbs of Damascus alone.

But with each passing day and each person killed, the risk of a storm of revenge grows. Only after the regime has been overthrown will it become clear who gains the upper hand among the rebels: those who demand reprisals for their dead, or those who, at a demonstration following the Daraya massacre, held up a sign with the message: "No revenge! Stay on course! We will put everyone on trial!" 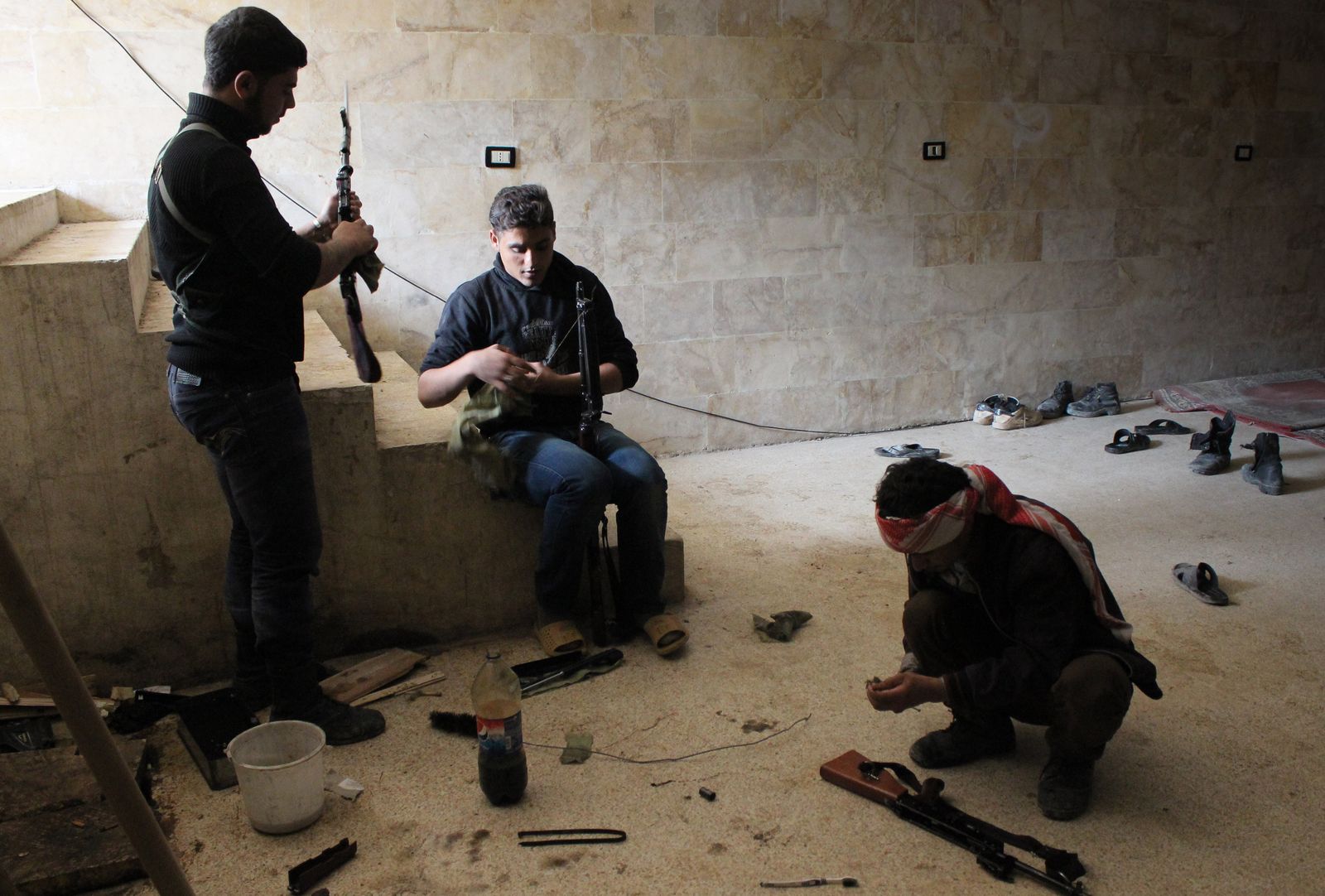 The shine has worn off Syria's rebels as they continue to battle forces loyal to President Bashar Assad. Recently, some rebel groups have been accused of committing atrocities not unlike those perpetrated by government forces. Here, rebels with the Free Syrian Army clean their weapons in the northwestern city of Maraat al-Numan.