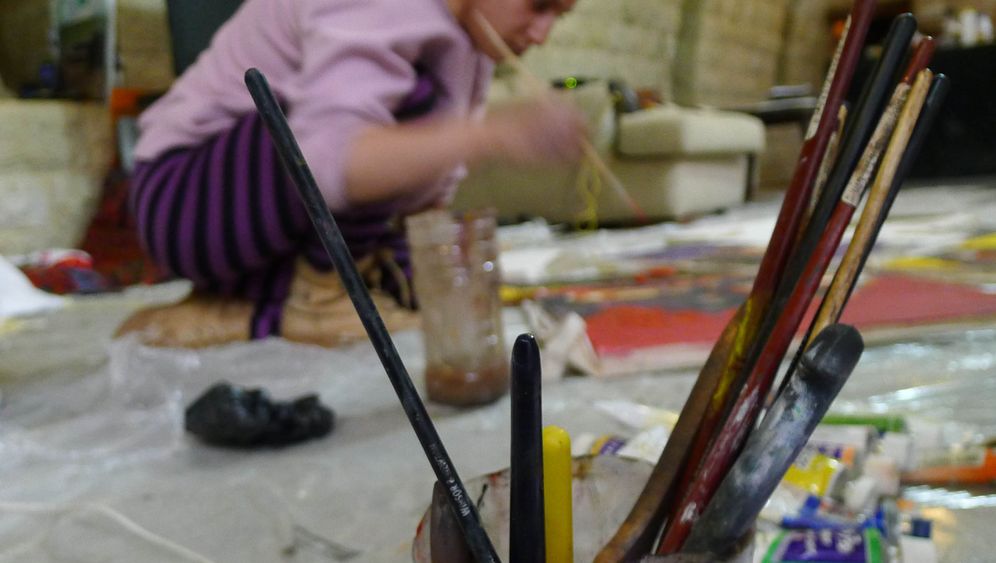 To visitors, this refuge for young Syrians fleeing the conflict in their homeland might look more like a ski lodge, or maybe student housing.

Couches surround a fireplace at one end of the long, stone structure -- a 200-year-old former stable with arched windows and doors. At the other end, there is an open-plan kitchen with stainless steel counters. In between, the floor is covered with detritus left by former and current residents, including discarded clothing and dirty dishes. A fluffy white dog called Chico roams around looking for scraps.

Like many of the places where Syrian refugees have sought safety in Lebanon, this site is a short drive out of the capital, Beirut. But the Art Residence Aley is not a typical refugee camp.

Sally Samaan, an artist from Hama, sits by the fireside carving a wood print. She is among a number of young Syrians who have come here since last October when the facility opened, offering a place where they can escape the conflict and continue creating art.

The 24-year-old is working on a series of black and white prints of "helpless people," she says. "Big, strong figures doing nothing. Except," she complains, smiling and waving her chisel in the air, "this woodblock isn't flat."

In front of her, a large canvas leans against a wall. It's an intense, abstract painting in violent blacks, grays and reds that looks like a screaming head. Above the fireplace there's a pale blue, cartoonish sculpture that resembles a character from "The Simpsons" -- except it's a bust of former Syrian leader, Hafez Assad, the father of current Syrian president, Bashar Assad. At the other end of the room, it's hard to miss another eye-catching sculpture that features a series of colorful, miniature corpses in a circle.

They are colorful because when the rebel fighters in Syria run out of white sheets for shrouds, they use curtains, table cloths and any other fabrics they can find to wrap up bodies, Raghad Mardini explains.

Mardini is the prime mover behind the art residence, based in the town of Aley, Mount Lebanon. The former civil engineer, who moved from Damascus to Beirut in 2008, leased this building in 2011. After renovations were completed in May 2012, she started funding a series of residencies for young artists here.

"We've got lots of applications from artists who want to stay and last October we had our inaugural exhibition, with work by nine artists," Mardini says.

The artists stay for two weeks and Mardini provides room and board, art materials and a small weekly stipend. In return, they leave one piece of work behind. Mardini doesn't see it as a charity, though, saying that she hopes the residence will eventually become self-sustaining.

More of an enthusiast than a serious art world player, Mardini has been doing her best to market the artists' work and get them exhibitions. In March, she attended the Art Dubai international fair to network on behalf of her residents.

It turns out that the art world is particularly receptive to Syrian art at the moment. As Antonia Carver, the head of Art Dubai, told the New York Times recently, the new growth areas for Middle Eastern art include works from "countries that are going through difficult times, politically, and whose artists use Dubai as a refuge or funnel to the outside world." The same goes for Beirut, where the number of exhibitions showing work by Syrian artists has been increasing as steadily as the growing flood of Syrians taking up residence there.

"Beirut has become the bittersweet beneficiary of much Syrian art in exile," Kaelen Wilson-Goldie, a respected art critic for Beirut's English-language Daily Star, wrote in her end-of-year review of the city's art scene in December 2012. "All of that work is at once haunting and illuminating. None of it bodes well for the situation to the north and east of here in the year to come."

Art has played a big role since the beginning of the Syrian revolution, when many young, middle class Syrians finally felt free to express themselves. In fact, some have suggested that the Syrian revolution was sparked by artistic expression of a sort, when anti-regime graffiti in the southern Syrian town of Daraa saw a group of teenagers thrown in jail, provoking some of the first popular protests.

And creative demonstrations have continued. Syrians have drawn cartoons, made paintings, sculptures and movies, and written poems and slogans to indicate their opposition to the Assad regime. Some have even said that, of all of the Arab Spring revolutions, the Syrian uprising has seen the most art used for political protest.

Syrian art itself has also evolved with the uprising. "The revolution shook the concept of art's purpose to its foundations," notes a report titled "The impact of the arts on the Syrian revolution," which was part of a project for Germany's Heinrich Böll Stiftung. "The prevailing understanding in Syrian cultural circles saw it as an elitist cultural product divorced from public concerns …. This concept [has come] face to face with a street in revolt."

At the Art Residence Aley, Mardini has a similar take. "This is the generation that is going to build the new Syria," she says. "It's also about civil resistance and building peace and building a new Syria. So the artists must be able to express themselves and they must let out their fears, their troubles and all the sickness in society."

But the artists themselves are not completely sure that's what they're doing here. When the uprising began, many young Syrians were taking part in what they hoped would be a peaceful, popular revolution. Now, they seem confused and depressed about what has turned into a civil war.

"I don't think I can make any huge difference to what's happening now," says Samah Abdulhamid, 23, who came to Aley from Damascus. She was supposed to be starting her Master of Fine Arts studies there, but left the country instead. "I can't say to someone, 'I will paint your sadness, or your awful experience.' Some people have lost their children. So that would be a lie," she says. "It's like being in some kind of coma. I can't do anything but paint, even though it's very hard to express what's happening right now in artistic terms. What I can do is not be violent -- but at the same time I feel really helpless."

Does she consider herself an activist? "No," she says.

Abdulhamid comes from Latakia, a regime stronghold on the Syrian coast, and her family is Alawite, the same sect of Shiite Islam to which the Assad family belongs. Many Alawites are worried about what will happen if Assad falls. As the conflict becomes increasingly sectarian, there are fears that the Syrian government might follow the path of other Arab Spring countries and become Islamist should Assad be deposed.

During her fortnight in Aley, Abdulhamid plans to focus on making work that looks at how the people around her are reacting to the conflict in Syria. "We're going to extremes with every reaction," she explains. "When you get mad, you get very, very mad. When you laugh it verges on hysteria -- and sometimes it's not even funny. It's not normal," she says.

It's not easy being a Syrian in Lebanon right now. It's a small country with a violent past and a coalition government that's not particularly stable at the best of times. Despite having agreed not to get involved in the Syrian crisis, the government is under enormous social and financial pressure from the growing tide of Syrian refugees, which has reached some 448,000, according to a United Nations Refugee Agency (UNHCR) estimate from early June. The Lebanese government and other organizations estimate there are at least 1 million Syrians in the country now, a figure that includes those who, like the artists at Aley, have not registered with the UNHCR.

In affluent Beirut neighborhoods, rents are rising quickly as middle class Syrians try to find new homes. And while the young artists work here in Aley, even younger Syrians can be found on the streets of central Beirut, begging or selling roses and lighters. Some parts of the city and surrounding areas now have a 7 p.m. curfew just for Syrians that is reportedly enforced, either officially or unofficially, by locals.

Hezbollah, the Islamic militant group that acts more like an alternative government in many parts of Lebanon, also staunchly supports the Assad regime. Hezbollah fighters are in Syria, battling alongside government forces, and the party's leader Hassan Nasrallah recently vowed they would have victory there. This means that refugees who oppose the regime aren't necessarily open about it here, either. As one of the young artists comments: "As a Syrian, you can't speak too openly about some things."

With no end in sight to the war, the future remains uncertain for Syria and the artist refugees. "There's not much hope," says Remy al-Haddad, the painter responsible for the various screaming figures and faces on canvases around the room. "You can't change anything from good or bad. And everything in between, where you are stuck, is grey."

For a whole year, the 25-year-old artist, who is originally from Mhardeh in the province of Hama, didn't leave her house because she was so anxious about what was happening outside. Her paintings -- among the most powerful and disturbing works in the room -- appear to reflect her troubled mind.

"My nephew is three and he already knows the difference between the sounds of bullets and a bomb," she adds. "He knew the word bomb before he knew the word mama."

The three women working at Aley aren't sure what they will do after the residency is over, or when the conflict ends. They don't necessarily want to go straight back to Syria. Abdulhamid, who describes herself as a "psychological refugee," says she wants to try and go further afield, perhaps to Europe if possible.

Then she goes back to an earlier question: is she an activist or an artist?

"You know, I used to call myself an activist," she says. "But I don't anymore. There are some streets in Damascus I can't walk down any longer," she says, pointing at her head to indicate the lack of a headscarf. "Because I don't believe."

"What would you do?" she asks. "I've been asking myself that question for the last six months. I haven't found an answer yet."