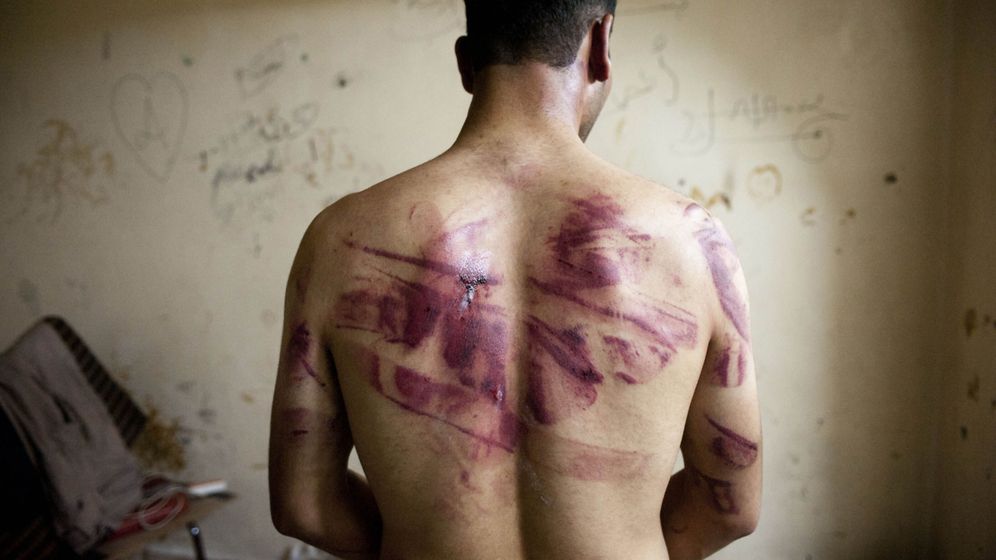 There was a boy, just 14 years old. Every morning, the man in charge of the basement jail cell would send him up to the torturers. One morning, the boy asked for mercy. "Otherwise I will die," he said. The man answered: "You will go, or I will fuck your mother."

The next morning, the man asked the boy: "Are you ready?" The boy begged and cried. "Do you want me to ... your mother?" the man asked. So, once again, he took the boy to be tortured.

This is how Shadi Hadri, a former Syrian prisoner whose name has been changed to protect his identity, tells it. He says he will never forget those scenes. Nor will he forget what he claims the interrogator of the Syrian General Intelligence Directorate's Branch 251 did to him. He forced him into a tire, then beat him. He hit him on the soles of his feet with cables, tied him with his hands behind his back and then hung him up by them.

Hadri told DER SPIEGEL in a phone interview that he spent five-and-a-half months in Branch 251's dungeons. He said he was arrested in 2012, after helping protesters and giving water to people in opposition strongholds near Damascus. He said he fled to Europe after his release.

Tens of thousands of people have had similar experiences in the jails of the General Intelligence Directorate (GID) and in those of the militias and army. There is no shortage of details about horrific acts that have been perpetrated by the henchmen of Bashar Assad's regime. These acts continue to be perpetrated to this day. Human rights organizations and politicians have known about them for a long time, but until last Tuesday, little had been done about it.

That's when German Public Prosecutor General Peter Frank ordered the arrest of two men allegedly responsible for the suffering of Hadri and thousands of others.

Officials placed Anwar R., 56, in custody in Berlin. He's the former leader of an investigations unit within Branch 251. Authorities also arrested Eyad A., 42, in the western German state of Rhineland-Palatinate, who led a unit within the directorate whose task was to identify and arrest deserters, protesters and other suspects in the course of checks on people. Both are being held on suspicions of having committed crimes against humanity. In France, officials also arrested another man who allegedly carried out torture for Assad.

The arrests raise the possibility that the Syrian regime's crimes will soon be prosecuted by European courts. The German Federal Prosecutor's Office alone is investigating around two-dozen suspects and is also conducting a manhunt for Jamil Hassan, the head of the Syrian Air Force Intelligence Directorate, through an international arrest warrant.

Witnesses and potentially also defendants Anwar R. and Eyad A. could soon be placed in the dock here in a development that may well lead to some distressing revelations. Investigators with the Federal Prosecutor's Office have already compiled hundreds of pages of details about the accusations against the two men in custody.

The reports indicate that Eyad began his service for the intelligence service in 2010. The directorate is one of the most important parts of Assad's apparatus of repression and, according to Western estimates, has approximately 10,000 employees. Eyad A. started off at Branch 251, which is responsible for "domestic issues" and pursues Islamists and supporters of the Syrian opposition and is also tasked with preventing terrorist attacks.

In 2011, he allegedly got assigned to a subsection responsible for capturing people on the directorate's behalf. He had approximately 30 men working under him. They arrested around 100 people each day in the opposition stronghold of Douma. After a month, he became the leader of a squad assigned to storm the apartments and homes of supporters of the opposition.

The article you are reading originally appeared in German in issue 8/2019 (February 16th, 2019) of DER SPIEGEL.

Eyad A. and his men allegedly once chased protesters through the streets of Douma. They brought everyone they caught to the jails of Branch 251, including to a building in Baghdad Street where lead investigator Anwar R. was based.

'Just Being There is Torture'

When Eyad A. dropped off prisoners there, one guard supposedly hit one of the detainees so hard he collapsed and eventually died. A. allegedly saw the bodies being removed and heard the prisoners' cries. Anwar R. had 30 to 40 subordinates in the building. Investigators estimate that the cells in the building were meant to hold approximately 100 people, but contained more than 400.

Hussein Ghrer was one of those prisoners. "Just being there is torture, everything there is torture," he recalls. He says that they had to sleep in shifts, "like swords," in the cells, because not everybody could sleep at the same time and claims that the small cells didn't have any toilets or water. He was beaten three times a day, he says, with a stick on the soles of his feet, on his torso, and with an army belt with a large buckle.

The man, who now lives near Hanover, says he wasn't tortured "as badly" as other prisoners. He says he was hit, yes, but that it would have been worse to "have the flesh pulled from my body." Ghrer says, "I have seen flesh and bones."

According to the findings of the German investigators, in the initial period after the uprising, the leaders of Branch 251 decided which prisoners would be tortured and which would not. Later, they say, virtually all prisoners were tortured. The investigators assume that although Anwar R. didn't personally carry out the torture, he had been aware of it and about the deaths and that he even ordered some of the punishments to be carried out.

Former prisoners have reported that he had been present during the interrogations when the soles of their feet were stabbed and they were beaten.

Anwar R. has admitted to investigators that the interrogations had been part of his job. He said he carried out hundreds of them, and that it hadn't always been possible to be delicate, arguing that people who seemed dangerous to directorate employees faced "stricter" interrogations than others.

DER SPIEGEL spoke to Anwar R. back in 2013, after he had fled Syria for Jordan. He had a moustache and his hair was already thinning. He was polite and spoke hesitantly, but he did not hide the fact that he had worked for the intelligence service.

He said that starting in 2005, he had been charged with investigating Islamists trained by other Syrian services to spread terror. He said that the Assad regime had armed Islamist groups so the authorities could portray the quashing of the opposition as part of the fight against terrorism. In the run-up to a purported terror attack in Damascus, he says, "the Iranians even sent in a movie special-effects expert so everything looked perfect."

He said that when an explosion went off in his office complex in the area of Kafr Souza, he wanted, as lead investigator, to look for the culprits, but that the head of the directorate had "given the clear order to end the investigations."

Was that what led him to desert in December 2012 and flee? His wounded pride as an investigator? Anwar told the investigators with the Federal Criminal Police Office (BKA) and the Federal Prosecutor's Office that he fled because members of the opposition had captured his son-in-law and threatened his daughter and son. Eyad A., who was likewise arrested last Tuesday, said he deserted after he was told to fight against civilians and kill them.

Neither of the men seems to have any sense of wrongdoing for being part of a system responsible for torture and murder because, as they are emphasizing, they switched sides.

German investigators have also taken note of that. A frustrating aspect of their work is that they only have access to people who, like Eyad A. and Anwar R., have turned their backs on the regime. It's a terror apparatus that isn't directed solely at the Syrian population. Several citizens of Western countries either are or have been imprisoned in Assad's jails.

And given that German officials have no way of apprehending perpetrators in Syria, they also have no way of representing or protecting the country's citizens there, as the case of Martin L. shows.

L., who grew up in the Eifel region of western Germany, was working as a technician for a German aid organization in Iraq when he was arrested on June 22, 2018, together with an Australian colleague in the Iraqi-Syrian border region. He wound up in a prison run by GID's notorious "Palestinian Branch."

German aid workers informed the Foreign Ministry in Berlin about the arrest, but officials couldn't find out any further information because, in response to Assad's brutal crackdown against his own people, Germany withdrew all its diplomats from Damascus in 2012. Most EU countries removed their ambassadors from the Syrian capital, with the exception of the Czech Republic and Romania.

Czech ambassador Eva Filipi was able to negotiate Martin L.'s release. The only condition of Assad's people was that Jan Hamacek, the Czech foreign minister at the time, was to pick up the two NGO employees personally in Damascus and meet with the Syrian foreign minister beforehand.

On August 9, 2018, Hamacek flew to Damascus accompanied by a diplomat from the German Embassy in Prague and a doctor. After his conversation with Syria's foreign minister, Martin L. and his Australian colleague were handed over. Hamacek greeted the two in German: "I am the Czech Foreign Minister, and I am here to pick you up." He also said, "You are flying home."

The two were given medical checks before the airplane took off. The doctor couldn't detect any signs of physical torture. Martin L. said they had been interrogated, but didn't say exactly what was done to them. Assad's people had accused them of being Mossad or CIA agents. "We thought they would kill us," he said.

In the days that followed, officials at the Foreign Ministry in Berlin debriefed Martin L. According to a transcript of one conversation, he described difficult jail conditions, but no torture. Sources at Germany's security agencies say he might also have heard the screams of people being tortured and witnessed guards raping women after they had removed the mothers' children from their cells. He said that his eyes had been covered when he was discharged, and that he was convinced at the time that he would soon die.

Returning to Syria would be a delicate matter. The BND has spoken about it a number of times with the Syrian government, which was open to the idea, but on one condition: that the German Embassy would have to be reopened.

The German government, however, isn't prepared to do that, because it would be tantamount to recognizing Assad's clique as the legitimate Syrian government. It's also conceivable that the ambassador would have to pick up his or her accreditation from Assad himself, so it's little surprise the German Foreign Ministry rejects the idea.

Another German citizen is also currently being held in Syrian custody -- Peter B., a master brewer who traveled to Syria to help set up a Czech brewery. He was arrested last summer and has been in custody in Damascus ever since. German authorities have thus far not had any direct contact with him and at times it wasn't even clear if he was still alive. Only recently, via indirect channels, information about him did reach Berlin. He is still alive. At least that's a start.