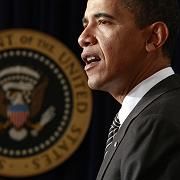 Barack Obama says next week's summit could pave the way for a global recovery.

US President Barack Obama on Tuesday called on the government leaders of the biggest industrial and emerging economies to agree quickly on further steps to stimulate demand at their summit in London on April 2.

Obama said in an essay printed in German newspaper Die Welt that G-20 countries needed to take "sustained and robust" fiscal stimulus measures until demand has been restored.

"If the London summit contributes to the initiation of immediate joint measures, we will be able to smooth the path to a secure recovery and prevent future crises," he said.

Obama's comments highlight disagreements between Europe and the US about how to tackle the recession. European leaders have rejected recent US calls for further economy-boosting measures on top of packages already passed in recent months.

They want next week's summit to focus instead on improving financial market regulation and supervision.

"First we must take quick measures to stimulate growth," Obama wrote in the article, according to a German translation of his comments. He said the United States was ready to lead the way to revive the world economy and to bolster confidence.

He also said the G-20 countries should rapidly make funds available to stabilize emerging economies in trouble, and that the International Monetary Fund's emergency funding needed to be increased substantially.

Separately, Bild newspaper reported that the German government now expects the German economy, Europe's largest, to shrink by between 4 and 4.5 percent this year. In January it had predicted a contraction of 2.25 percent.