US President Barack Obama has struck a new tone. It's one that would have been unthinkable back when he was still a presidential candidate -- the candidate of peace, who rejected his predecessor's wars and wanted to have as little to do with them as possible. But now he is president and commander-in-chief. And now he has the first war of his own making.

On Friday afternoon, Obama entered the East Room of the White House, to make one of the shortest but toughest speeches of his presidency. It was not an open declaration of war -- the word was not mentioned once. But the speech was the culmination of a week in which the pacifist turned into a warrior. At the end of that week, Obama himself committed American troops to a new, distant front for the first time. He did so reluctantly, but it was clear to him that the decision was inevitable.

It was one of the most decisive moments in Obama's still young presidency.

From Peace to War

Following the UN resolution on Thursday night that paved the way for military strikes against Libyan dictator Moammar Gadhafi, Obama had been silent for 20 hours. While the French and British were making preparations for military action, and the Germans pondered the wisdom of their abstention, the White House preferred to wait.

That was partly because no one in Washington really knows what to make of Gadhafi's recent maneuvering. But mainly it is because Obama finds himself trapped in a dilemma: He must explain to his people why he gone from being a staunch opponent of US military action to its advocate. It would be the third current American military operation in a Muslim country, after Afghanistan and Iraq.

Some American commentators have already begun referring to the Korean War. That war, which traumatized generations of Americans, began in a similar fashion in 1950, with a UN resolution and an offer of help from the West.

From peace to war in seven days: It is enough to give people "whiplash," complained Washington Post columnist Eugene Robinson on the TV channel MSNBC.

'We Will Not Respond to Words'

The discrepancy could also be seen during Obama's appearance in the East Room. He was addressing two different audiences. On the one hand, he threatened Gadhafi in tougher terms than ever before. On the other, Obama, with an eye to the domestic TV audience, played down the consequences from an American perspective. Supporting the UN was fine, he said, but ruled out unilateral military action or the use of US ground forces.

In terms of the message to Gadhafi, Obama could hardly have expressed himself any more clearly. "These terms are not negotiable," he said, referring to the conditions laid down by UN Resolution 1973, namely a ceasefire, an end to attacks on civilians and halting the advance on Benghazi. Obama has never seemed so determined before.

At the same time, he had his foot firmly on the brake when it came to military action. He announced that US Secretary of State Hillary Clinton would first meet with America's European allies and Arab partners on Saturday in Paris to discuss how the resolution should be enforced -- meaning that the bombing would not start immediately.

Washington also appeared unimpressed by Gadhafi's announcement of a ceasefire on Friday. "We are going to be not responsive or impressed by words," Clinton said. "We would have to see actions on the ground."

British Prime Minister David Cameron, who discussed the situation with Obama in a telephone conversation, made similar comments. "We will judge (Gadhafi) by his actions, not his words," he told the BBC.

Events on Saturday proved the leaders' skepticism to be well founded. Gadhafi's ground troops attacked the rebel stronghold of Benghazi, and a fighter jet was shot down over the city.

Selling War to the American People

During his speech, Obama summarized how the situation had escalated, partially for the benefit of those in his domestic audience who had previously paid little attention to the situation in Libya. He described how Gadhafi had responded to pro-democracy protests with an "iron fist": "Instead of respecting the rights of his own people, Gadhafi chose the path of brutal suppression." Obama also described the long series of international responses to Gadhafi -- the sanctions, the arms embargo and the repeated warnings.

Then came the most important part of the speech: why the US should get involved. "Now, here is why this matters to us," said Obama, sounding a bit like a math teacher explaining a problem to his students. "The calls of the Libyan people for help would go unanswered. The democratic values that we stand for would be overrun. Moreover, the words of the international community would be rendered hollow." In other words, America is prepared to go to war over such concerns.

Obama may well have used similar words when, earlier in the White House, he had briefed the most important representatives and senators in detail about the possible UN deployment for the first time. The audience included both supporters of a US involvement, such as John Kerry, Joe Lieberman and John McCain, as well as opponents such as Dick Lugar.

Congress does not need to approve the US action, because it is not an official declaration of war. But it can still hold a symbolic vote. By then at the latest, the divisions in Washington will probably start showing.

The first cracks were already appearing on Friday. "None of this makes any sense," the columnist Andrew Sullivan wrote in his blog for The Atlantic. Gaddafi is not a threat to the US, he argued, adding "not even the most righteous neocons" have pushed for military action on such slim grounds. Sullivan also condemned "the imperial presidency that Obama has now taken to a greater height than even Bush."

'Our Cause Is Just'

It is now clear that Obama's attitude changed on Tuesday evening at a crisis meeting at the White House which apparently became extremely heated. Both sides presented their arguments for and against an intervention in the conflict. Vice President Joe Biden and Secretary of State Hillary Clinton, who was taking part via telephone, advocated military action. They were opposed by US Defense Secretary Robert Gates, National Security Adviser Tom Donilon and his deputy, Denis McDonough.

In contrast to his stance on the revolutions in Egypt and Tunisia, Obama ended up joining the side of the interventionists, arguing that Libya was central to the whole wave of change in the Middle East. "This is the greatest opportunity to realign our interests and our values," a senior administration official said at the meeting, according to the magazine Foreign Policy. The official apparently said that the sentence came from Obama himself. The president included the same sentiment in his speech on Friday.

In his address, Obama stipulated one condition, however: no invasion. "Our goal is focused, our cause is just, and our coalition is strong," he said -- sounding exactly like George W. Bush. By an irony of history, his speech came just before the eighth anniversary of the bombing of Iraq on the night of March 19-20, 2003, which began the Iraq war.

"In the case of Libya, they just threw out their playbook," Steve Clemons from the New America Foundation told Foreign Policy. "The fact that Obama pivoted on a dime shows that the White House is flying without a strategy."

It also shows that the old divide between the State Department and the Pentagon has reappeared. Hillary Clinton has won this round, at the expense of Gates, who did not want to impose an additional front on his already overburdened forces -- especially as all the strategic scenarios in Libya are unappealing.

Nevertheless, the troops are ready. The US has brought six warships and a submarine into position in the Mediterranean. "We have been deploying in the region for a few weeks," says one government source. "We are ready to fight." The "full range" is enabled, he says: combat jets and bombers, reconnaissance aircraft and marines.

But there was a sense of disbelief in some quarters in Washington about the fact that Obama set off on a long-planned five-day trip to Brazil, Chile and El Salvador on Friday evening, just hours after his Libya speech and despite the ongoing crisis. Gates was also planning to leave for a three-day trip to Russia on Saturday.

Obama is "going on vacation," mocked host Steve Doocy on the conservative Fox News network. "He's going to Rio. You've got to be kidding. He's taking his family."

The deputy national security adviser, Ben Rhodes, had earlier defended the trip. "It's imperative that the United States not disengage from these regions," he told reporters on Wednesday.

But there's no getting away from the fact that Rio is a long way from Tripoli. Obama is indeed a reluctant commander-in-chief. 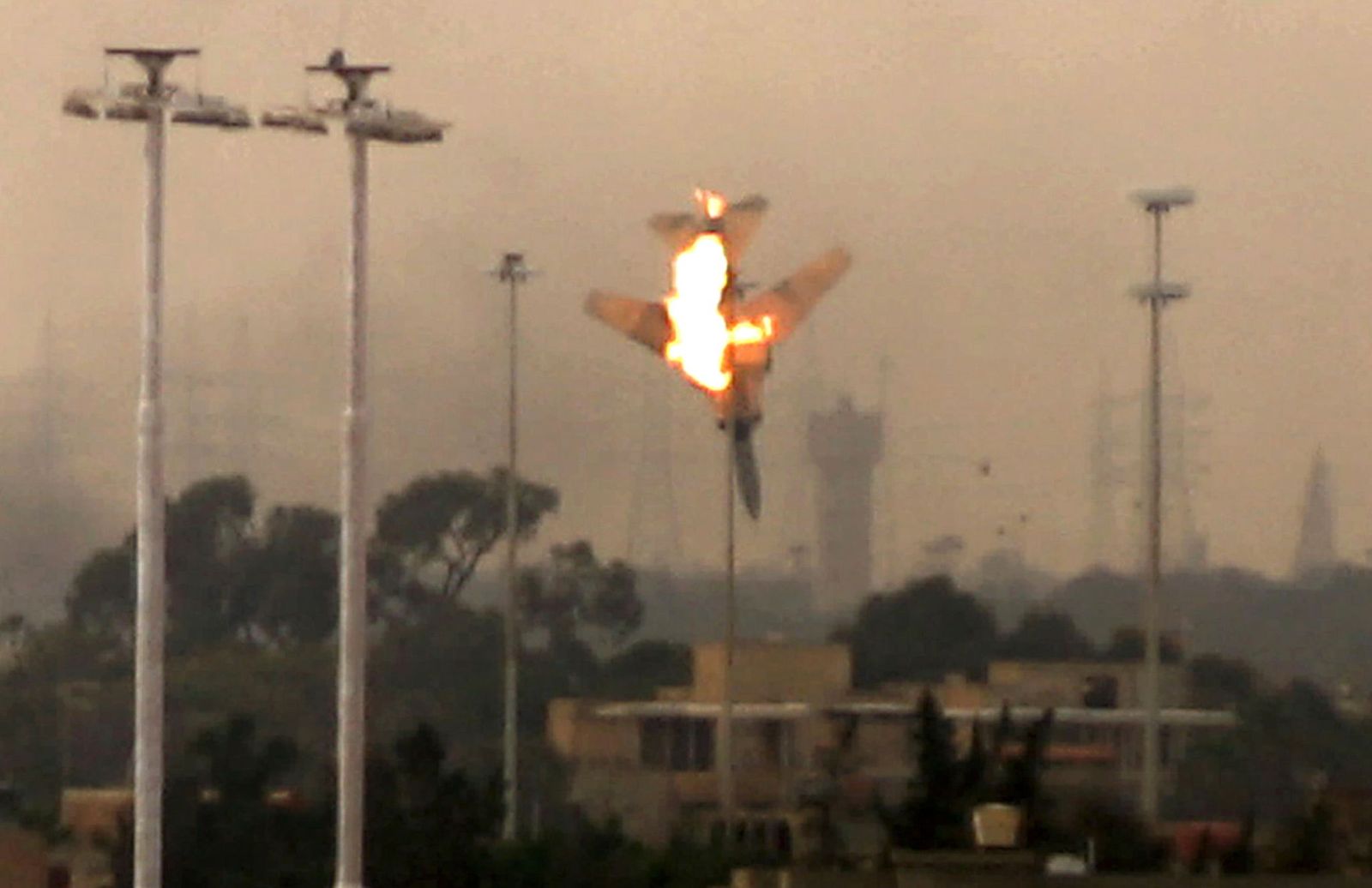 A Libyan plane crashes after being shot down in the rebel stronghold of Benghazi on March 19: Barack Obama has committed the US to military action against Moammar Gadhafi.