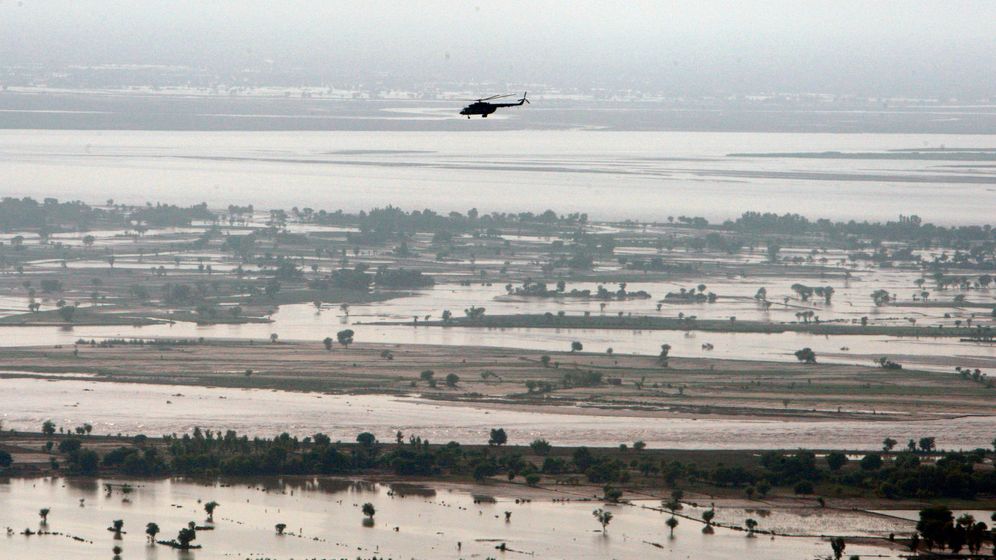 The man with the gray beard and the piercing eyes grabs a bottle of mineral water and fills a metal cup to the brim. "There you go," he says, handing the container over to a sweating farmer in muddy clothing. "Drink, my brother, drink," he says. "May Allah protect you!"

The young man gulps down the water as the older man hands a cup to the next person standing in line. Hundreds of people have lined up here for nothing more than a single cup of clean drinking water.

That, however, is also the extent of the aid provided by the extremists in Pakistan's flood areas -- a table in a tent and a banner on the fabric wall with the words "God is great" written in Arabic. Beneath stand a few cardboard boxes filled with water bottles. "I know it is little," says Rahim Ullah, who is distributing water in Charsadda in northwestern Pakistan. "But it is more than others are doing for the people here."

Rahim Ullah is a Pashtun from the northwestern Swat Valley, where the Taliban ruled until a Pakistani military offensive in early 2009. He admits that he is "very close" to the Islamists. When asked if he is an extremist himself, he answers with a counter-question: "At what point does a person become a Talib?"

Since the end of July, monsoon rains have caused the rivers in large parts of Pakistan to spill over their banks, transforming entire provinces into giant lakes. And yet it is still not possible to determine the entire scope of the flood catastrophe. But the United Nations is estimating at least 20 million people have been affected by the floods -- people whose homes and fields were destroyed, who lost their entire possessions and, because of a lack of clean drinking water, were forced to drink from the polluted flood waters flowing by. Many are now suffering from diarrhea.

So far, more than 1,600 people have died in the flooding -- a relatively low figure compared to other natural disasters. Nevertheless, at least 6 million people need supplies and care urgently. And disease and a lack of drinking water and food could rapidly increase the number of fatalities, if aid isn't delivered quickly, warns Mengesha Kebede of the refugee aid organization UNHCR in Islamabad. John Holmes, the United Nation's chief emergency relief coordinator, says that the catastrophe is even bigger than this year's earthquake in Haiti or the 2006 tsunami in the Indian Ocean.

"I have visited the scenes of many natural disasters around the world, but nothing like this," says UN Secretary-General Ban Ki-moon, who visited Pakistan on Sunday to assess the damage. "The scale is so large: so many people, in so many places, in so much need." Describing the floods as "unprecedented," he said they "demand unprecedented assistance." 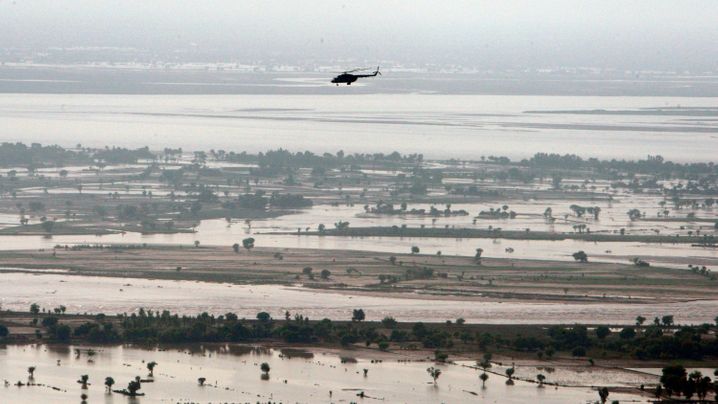 The Pakistani government, at least so far, has failed miserably in its response to the disaster. Around 60,000 soldiers are attempting to provide relief across the country. But many more soldiers remain stationed on the border shared with the country's archenemy, India, while 140,000 soldiers are still occupied with the war on terror. The West, on the other hand, is concerned that its ally in the battle against terrorism, which has been made unstable through extremist attacks, could be toppled once and for all, and is attempting to react as quickly as possible. The United States has withdrawn helicopters and soldiers from neighboring Afghanistan and redeployed them to evacuate flood victims. A widespread humanitarian response from around the world has started, with the US alone providing $71 million (€55 million), and €10 million in aid coming from Germany.

Aid Slow in Reaching those Affected

But this aid still hasn't reached the cities and thousands of villages ravaged by the flood waters. "With the exception of a few Islamic organizations, nobody has been here," complains hardware salesman Sirajuddin in Nowshera, a city located about halfway between Islamabad and the border to Afghanistan. The Kabul River flooded entire neighborhoods, submerging buildings right up to their roofs. Anger amongst the victims towards the government grows by the day.

The radicals know that the catastrophe presents a unique opportunity for them, and they are keen to exploit it. Their presence in the affected areas sends out an important message: We are taking care of you. The northwest province of Khyber-Pakhtunkhwa is home to Tehrik-i-Taliban Pakistan, the Pakistani spin-off of the militant Taliban. The fact that the government in Islamabad underestimated the scope of the disaster and requested foreign aid too late has given a boost to the group.

And while the Islamists made sure that their presence was felt, the most conspicuous thing about Pakistani President Asif Ali Zardari was his absence. At the beginning of August, he traveled to France and Britain for political talks, despite the fact that television stations were already broadcasting footage of entire regions that had been submerged in muddy flood waters.

In his absence, Zardari also provided Pakistan's army chief with the opportunity to portray himself as the more active helper -- thus pushing the country's delicate balance of power further into the hands of the military. Zardari attempted to defend himself against criticism, saying he had sought foreign aid for his disaster-struck nation. The extremists responded by suggesting that the democratically elected politicians in Islamabad are merely the enforcers of the Western powers -- criticism that is finding fertile ground these days in even the most remote villages.

'Residents Have Felt Neglected for Decades'

"There are no helicopters to free us from our misery here, but the fine gentleman (Zaradari) has no problem traveling around Europe," complains a fisherman in Sardaryab, a devastated village along the banks of the Kabul River. It took a full two weeks until after the beginning of the heavy monsoon rains for Zardari to visit and inspect the catastrophe-hit regions.

Even when the flood waters are finally gone, the rise in support for the extremists will continue. It's not just through their "currently ridiculous levels of aid" that they are gaining supporters, says Fayyaz Akbar, who runs a foundation that supports schools and doctor's offices in Mardan, a city in the heart of the Khyber-Pakhtunkhwa province in the northwest. "It is their long-term engagement in a region where residents have felt neglected for decades."

The masses of water have destroyed rice, sugar, wheat and cotton possibly valued at billions of dollars, with much of the damage being caused along the Indus River and its tributaries. The flooding has destroyed the fields where almost one out of two people find their employment.

"As soon as the water has retreated, there will be disputes all over the place over land ownership," Akbar fears. "The earth walls that demarcate the fields are gone." Akbar says he has little faith in the justice system resolving the problems. After all, judges and prosecutors are often corrupt and there is a tendency for court cases to drag on. "The Taliban, on the other hand," he says, "will arbitrate disputes effectively and unbureaucratically. People like that."

'People Are Afraid They Will Be Left to Themselves'

The fundamentalists have grown strong because the state is so weak. In areas where the government isn't taking care of its sovereign duties, the extremists are stepping in to fill the vacuum. "Here in Khyber-Pakhtunkhwa, people are afraid that they will be left to themselves by the government and the West," says Akbar. More and more Pakistanis consider the Americans to be their enemies. These sentiments are reinforced by US drone attacks along the border between Afghanistan and Pakistan in which civilians are often killed.

The Islamists take advantage of such resentment and present themselves as an alternative to the government. Taliban spokesman Maulana Azam Tariq told German news agency DPA that if the government in Islamabad eschewed flood relief "from Christians and Jews," the Taliban would raise $20 million of its own money -- an absurdly low sum considering that the cost of the flood damage is likely to total in the billions. For its part, the UN is seeking to raise close to a half-billion dollars in immediate aid.

But the future of the country doesn't lie exclusively in the hands of politicians -- nature is playing no small role. Qamar-uz-Zaman Chaudhry, the head of the Pakistan Meteorological Department, warned at the end of last week that the worst is still to come. He warned that a second wave of flooding would cause the levels of some rivers to rise. That could lead to further dam breaches in the southern part of the country.

The meteorologist predicted that the rains will first cease completely in about 10 days' time. The competition between the Islamic extremists and the Western states will continue for at least as long. 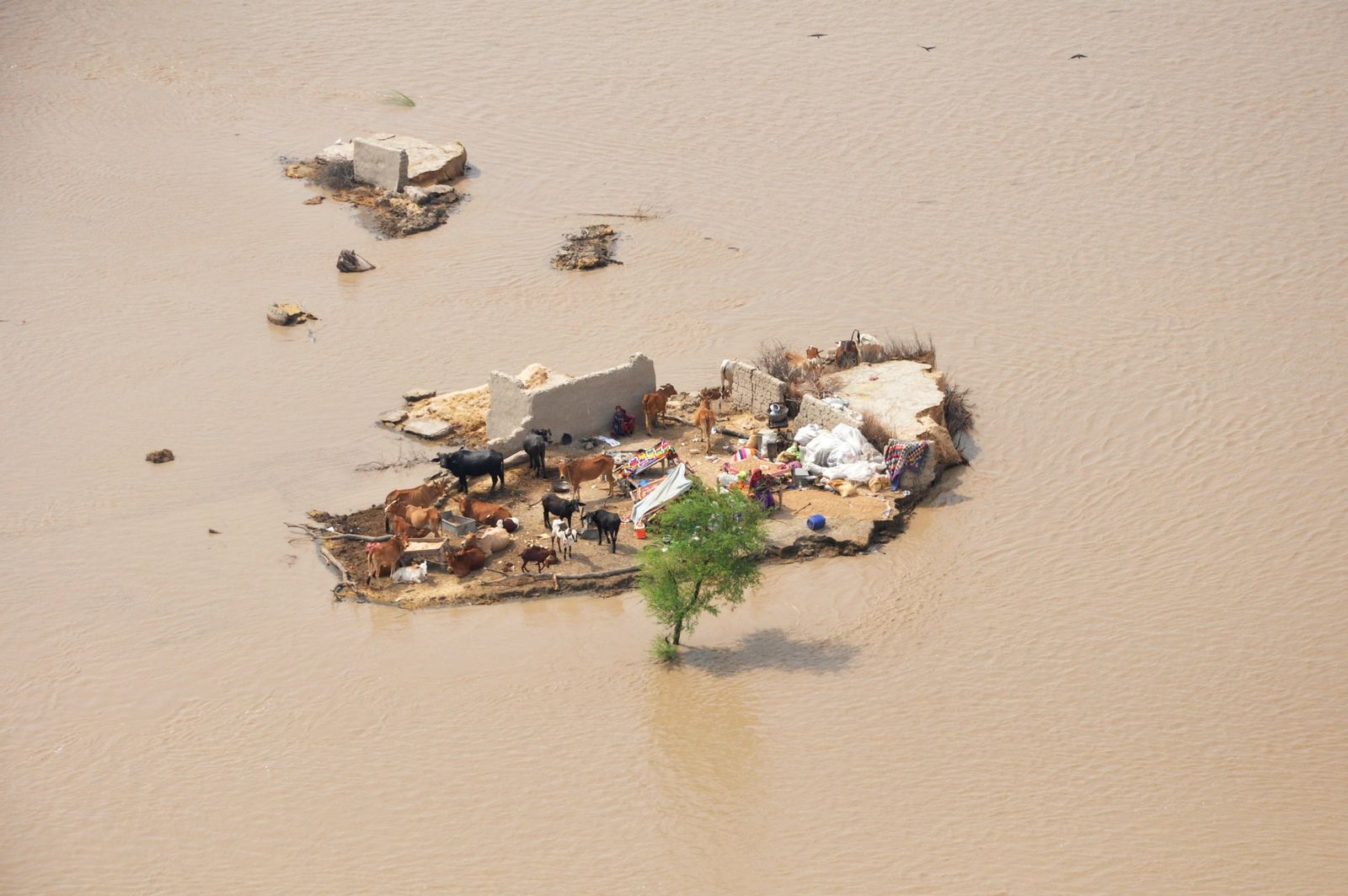 A family marooned by flood waters is seen from an Army helicopter in the Rajanpur district of Pakistan's Punjab province on August 9.