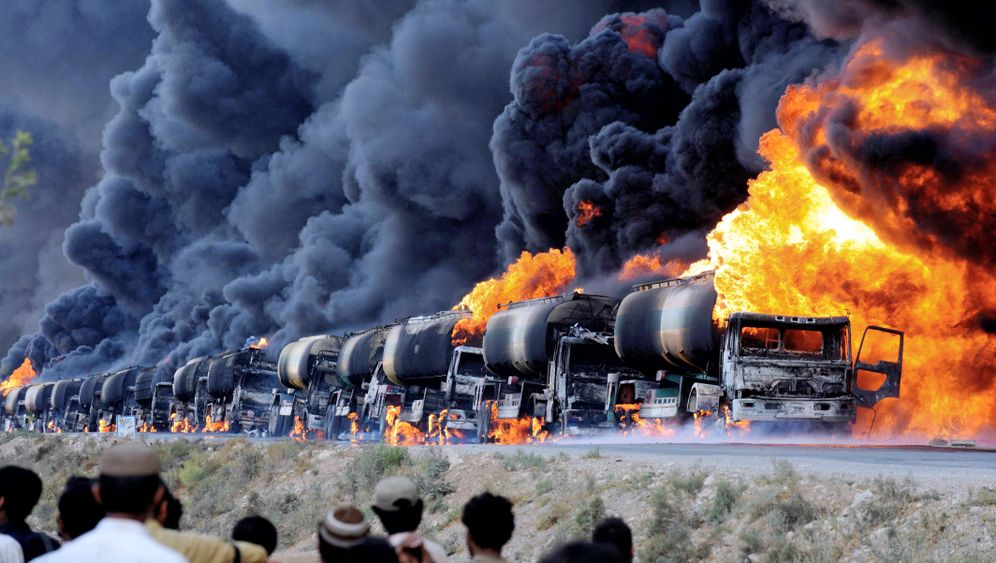 The man who landed at Munich's snow-covered airport in the last weekend of November 2010 was to have as little interaction as possible with normal airport operations. He arrived in a Falcon 900EX, the three-engine official aircraft of the Bundesnachrichtendienst (BND), Germany's foreign intelligence agency, after being picked up in the Persian Gulf. German officials then took him to accommodations prepared by the BND.

Normally the man, Tayyab Agha, would likely have been arrested as a terrorist in Germany; Agha is on an internal list of the Taliban leadership. But nothing was normal on that particular weekend. The top-secret meeting, arranged by the BND and the German Foreign Ministry, was a political first. It marked the beginning of talks between the Taliban and the United States government, which had sent its own delegation to Munich.

Now, more than 13 months later, it is clear that the negotiations were successful. Last Tuesday, the Taliban announced plans to open a liaison office in the Persian Gulf emirate of Qatar. The office, as spokesman Zabiullah Mujahid explained in a statement posted on the Internet, will be "a political office for negotiations."

An office in Qatar? It doesn't exactly sound earthshaking. Nevertheless, it sends the message that all sides have agreed to the commencement of peace negotiations involving the Taliban, the government in Kabul and the forces stationed in Afghanistan. It also signals that the Taliban are now stepping onto the global stage, even if their office does not enjoy the status of a diplomatic mission.

Talking to Their Enemies

Now, in January 2012, a significant change is coming to a conflict that once seemed intractable: The Americans will talk to their mortal enemies. These are the men who are to blame for the deaths of 1,783 American and almost 990 non-American soldiers in the international Afghanistan mission -- and who still provide support to the al-Qaida terror network.

The goal of the talks is to provide Afghanistan with a political outlook for the period following the withdrawal of Western troops in 2014. Everything seems possible, even the inclusion of the Taliban in a government of national unity.

The leadership, headed by Mullah Omar, has even indicated that it could agree to one of the West's central conditions: that it part ways with al-Qaida and renounce international terrorism. This would be a signal that would enable Western governments to sell the Afghanistan mission as a political success after all.

As a presidential candidate, current US President Barack Obama promised that he would talk with America's "enemies." Now Vice President Joe Biden has even said: "The Taliban per se is not our enemy" -- a remark its leadership had suggested as an initial confidence-building measure.

But what prompted the Taliban to open the door to talks with the Americans, contrary to all vows not to negotiate with the West until after the withdrawal of foreign troops? In essence, says an Afghan with close ties to the Quetta Shura, the top leaders of the Afghan Taliban linked with Mullah Omar, it was the Taliban leadership's belief the Americans could be convinced to withdraw completely, and that the best way to achieve this is through negotiation. But, says the Afghan, "if there is no withdrawal in the end, then there will be no agreement either."

Apparently, the Taliban also sense that even a victory in their campaign against the current regime in Afghanistan could be disastrous for them. They would be able to assume power in Kabul, but if Afghanistan was broke, cut off from the rest of the world and treated as a pariah state once again, they would have achieved little. This was already the case before the overthrow of the Taliban in 2001, when the only countries that recognized the "Islamic Emirate of Afghanistan" were Saudi Arabia, Pakistan and the United Arab Emirates. Even the Taliban realize that without billions in foreign aid, Afghanistan would be on the verge of collapse after 2014.

For the Americans, finding reputable negotiating partners among Mullah Omar's men was the toughest nut to crack. Afghans had already offered their services as emissaries. But some were already removed from circulation in Pakistan, like the Taliban's second-in-command Mullah Baradar in early 2010, who took it upon himself to negotiate with the government of Afghan President Hamid Karzai -- and was promptly arrested. Others turned out to be frauds, like the presumed shop owner from the Pakistani city of Quetta, who spent several months in Kabul in 2010, claiming he was Mullah Omar's representative, only to disappear with the six-figure goodwill payment he had been given.

Other "emissaries" killed their negotiating partners in suicide bomb attacks, like the two men who assassinated former Afghan President Burhanuddin Rabbani, the chairman of the High Peace Council, in his house in Kabul in September 2011.

Tayyab Agha, on the other hand, was quickly recognized as a reliable man. For the German government, discovering him was one of the rare moments of successful international diplomacy. For the second time within a few months, following the prisoner exchange between Israel and Hamas, Germany is serving as a global intermediary.

In late 2009, an Afghan exile living in Europe contacted the BND, saying that he could put the agency in touch with the Taliban leadership. He wanted to know if the Germans were interested.

In the summer of 2005, the BND had already tested the waters to see if there was a basis for talks with the insurgents. The Germans put up two Taliban representatives in a Zürich hotel, but the talks failed because Mullah Omar refused to distance himself from al-Qaida.

This time the BND handled only the logistics, and let the Foreign Ministry lead the diplomatic efforts. In the spring of 2010, Bernd Mützelburg, Germany's special envoy to Afghanistan at the time, met for the first time the man who was to represent the Taliban and Mullah Omar: Tayyab Agha.

A Reputation for Keeping His Word

Agha is a calm and levelheaded negotiating partner, a Pashtun with a reputation for keeping his word. The meeting with Mützelburg took place in the neutral terrain of the Persian Gulf, easily reachable from both Pakistan and Afghanistan.

In April 2010, Mützelburg was succeeded as Germany's special envoy to Afghanistan by Michael Steiner. German Chancellor Angela Merkel had given her blessing to talks with the Taliban, as had President Obama. The White House agreed to guarantee Agha's security, a condition without which he would likely not have agreed to the meetings, given the substantial risk of being arrested en route and flown to Guantanamo.

In Washington, Richard Holbrooke, Obama's then special envoy for Afghanistan, coordinated the negotiations. However, with his determination to head possible talks with the Taliban, he alienated many government advisers who were opposed to dialogue of any kind solely for this reason. Shamila Chaudhary, the former National Security Council Director for Pakistan and Afghanistan, argues that, because Holbrooke wasn't able to become secretary of state, he wanted to singlehandedly broker peace in the region, as he had done in the Balkans.

The communication between Agha and the Berlin brokers was handled through intermediaries, without the use of mobile phones or email, so that no one could determine the whereabouts of the insurgents' representative. Agha proved that he was indeed in contact with the Islamist group's leadership by posting a pre-arranged message on a website attributed to the Taliban.

The mood was reportedly extremely tense when he and the Americans met for the first time in November 2010. The Americans were very aware of a 2009 incident in the eastern Afghan city of Khost, when a supposed CIA informant detonated an explosive belt, killing himself and seven CIA agents. But the BND guaranteed that nothing would go wrong in Munich.

The American delegation consisted of diplomats from the State Department and intelligence officials. Agha was accompanied by two of his closest associates. The meeting was "a breakthrough," according to sources in Washington. In May 2011, the German government hosted another meeting in Munich.

The German government has now acquired experience with negotiations between mortal enemies, a process that consists of many small steps. Agha took one of these steps last summer, when he helped the Americans in the case of Bowe Bergdahl.

Bergdahl, 25, is an American GI who disappeared, under circumstances which are unclear, from his post in Afghanistan's Paktika province in June 2009. He left his weapon, protective vest and radios behind. In a video later released by the Taliban, he said that he had been kidnapped.

Last summer, Agha provided the Americans with a sign that Bergdahl was still alive, while simultaneously demonstrating that he has access to the senior Taliban leaders who are allegedly holding Bergdahl. Under a deal which is currently being worked out, the GI could be exchanged for five senior Taliban officials being held in Guantanamo.

They include two former provincial governors, the former intelligence agent Abdul Haq Wasiq, and Mohammed Fazl, who was deputy defense minister in the former Taliban regime.

Agha supplied the list of names. Under the proposed agreement, the prisoners will be placed under house arrest in the Qatari capital Doha, where they will be taken care of by the Red Cross. It is still unclear whether the exchange will actually take place. It is a potentially risky move for the Obama administration, because it could provide the Republicans with ammunition against the Democrats in an election year. Obama is hesitating, but without the exchange there will be no political negotiations, despite the opening of the Taliban office in Qatar.

The president's problem is that the US public still perceives the Taliban as a terrorist group. The Republicans are openly rebelling against any approach to negotiations. Senator Saxby Chambliss, the ranking Republican on the Senate Committee on Intelligence, warns against talks with "terrorists," while presidential candidate Mitt Romney accuses Obama of having a "foreign policy of appeasement."

Vali Nasr, a former senior adviser to the late Richard Holbrooke who is now a professor of political science at Tufts University, holds a different view. "We're going to leave Afghanistan, so it's better to help negotiate an agreement with the Afghan Taliban that would make our exit easier" and help stabilize the country "after we leave," Nasr said in an interview with the Bloomberg news agency.

But stumbling blocks remain. What role will President Karzai, the Iranians and, most importantly, Pakistan play? The Americans practically had to force Karzai to agree to the opening of the Taliban office, given Mullah Omar's obvious intent to boycott the current Afghan president. But Karzai is demanding that whatever happens now, it must be subject to his administration's control. That is an illusion.

The Iranian leadership, which recently signed a defense pact with Kabul, also wants to play a stronger role in Afghanistan and is seeking contact with the Taliban, despite having almost gone to war against Taliban-controlled Afghanistan in 1998. Senior military leaders in Pakistan will also do what they can to keep the Taliban under control.

A lot of time will pass before negotiations with the group produce results. It is a political balancing act that "is more likely to take years than months," say officials in Washington and Berlin.

For now, however, the fighting goes on in Afghanistan. Washington insists on continuing its "kill-or-capture" operations, which have claimed the lives of thousands of Taliban fighters in recent years.

Mullah Omar's fighters are unlikely to behave any differently.