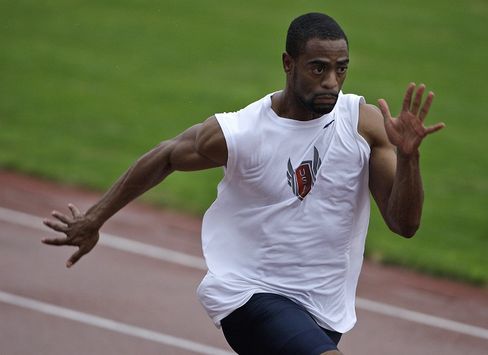 Sprinter Tyson Gay of the United States trains in Beijing.

Tyson Gay's last public appearance before the Olympics is in a pavilion-style tent in Eugene, Oregon. Wearing a blue tracksuit, the world champion in the 100 meters is standing onstage. A Dixieland band is playing. Pictures of famous runners, including Jesse Owens, Carl Lewis and Maurice Greene, all Olympic champions, hang behind him on the wall. They make him feel uncomfortable, so he takes a big step to the side.

But Jon Drummond, Gay's trainer, who is standing next to the stage, says insistently: "No, no, no." Drummond is wearing a white tailored suit. He says to Gay: "You're a great athlete. You can do anything. You can win at the Olympics. So behave like a champion." Gay, 26, isn't sure what he means. Drummond jumps onto the stage and pushes him back in front of the images of Owens, Lewis and Greene.

The photographers laugh and take pictures.

Drummond won a gold medal as part of the US team in the 4x100-meter relay at the Sydney Olympics in 2000. But his most memorable performance was at the 2003 World Championships in Paris. After being disqualified for false starts, he lay down on the track and held up the race for 45 minutes in protest. Is this the way a champion behaves?

"Think what you will, but believe me, it won't be the nicest guy who wins in China, but the man who has no doubts. I want Tyson Gay to be the coolest guy in Beijing," says Drummond.

The 100-meter final will take place on Saturday at 10:30 p.m., Beijing time. Gay, whose personal best time is 9.77 seconds, is among the favorites. His main rivals are Jamaican runner Usain Bolt, 21, who holds the world record, at 9.72 seconds, and Asafa Powell, 25, the former world record holder. The race will be the high point of the games: There is nothing bigger at the Olympics than the 100-meter dash.

But there is also no race with such a bad reputation. Since the Ben Johnson scandal in Seoul in 1988, there has been only one Olympic gold medalist who was not suspected of doping -- Canadian runner Donovan Bailey, who won gold in Atlanta in 1996. Of the 15 sprinters who have stood on the medal stand at the Olympics in the last 20 years, only four have completely clean records. But most viewers don't care. When the starting gun is fired in Beijing, more than one billion people worldwide will be watching the race on television, hoping to experience a magic moment, perhaps even witness a new world record. "That's what it's about, that's the job, and that's the purpose of this race," says Drummond.

'Standing on the Moon -- Alone'

"It's a task that can also break you," says Justin Gatlin. Gatlin, 26, is driving his SUV through Atlanta, searching for a parking space. His windows are tinted. "Some people totally flip out when they recognize me. They start shouting: 'Wow, look, that's the Olympic gold medalist.' It's really stressful," says Gatlin.

9.85 seconds. That was Gatlin's time when he won the gold medal in Athens. "The Olympic final is pure energy. Whoever wins it can say: I'm unique, I'm complete. Everyone wants that." He made the dream come true. He says: "I was standing on the moon -- alone."

Gatlin finds a parking space in front of a restaurant. It's pleasantly warm, but he doesn't want to sit outside with the other patrons. He walks into the restaurant and sits down at a table in the far corner of the room.

Gatlin ended the era of Olympic champion Maurice Greene. America loved its new champion. Greene was a loudmouth from Los Angeles, while Gatlin was a well-dressed boy from Brooklyn. He was invited to the White House and to New York's top clubs. "There were people who wanted to touch me, because they didn't see me as a normal person. I was an alien."

The 100-meter race is a huge temptation. "There's so much you can win with this race. Money, fame, attention. It makes athletes crazy," says Gatlin. Tim Montgomery, he says, is a good example. Montgomery, who once dated sprinter Marion Jones, took so many designer drugs that he managed to break the world record in 2002. But he was caught and banned from competition, and from then on his life went downhill. In May, Montgomery was sentenced to 46 months in prison for check fraud. He was also convicted of dealing 111 grams of heroin. His sentence will be announced in October. "He's a freak," says Gatlin.

To hear Gatlin talk, it sounds as if he had forgotten his own story. In April 2006, he tested positive for testosterone. It was the second time he had been caught. He remains banned from track and field until mid-2010. 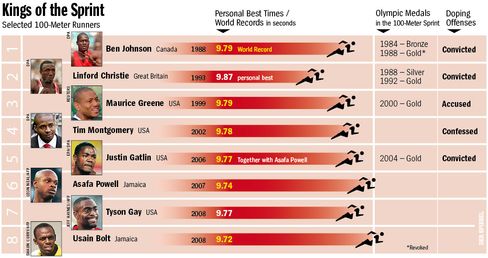 Kings of the Sprint

Gatlin claims that a massage therapist intentionally treated him with a testosterone ointment, out of revenge for Gatlin's decision to stop paying him. The massage therapist says that the story is nonsense. And Gatlin's former coach, Trevor Graham, was recently banned from the sport for life, after being found guilty of distributing doping materials. Gatlin says: "That has nothing to do with me."

The 100-meter race was his life. But Gatlin refuses to allow himself to be driven out of his world. He simply continues as if nothing had happened. He would have entered the US Olympic trials if a court hadn't barred him from competing. Since then, he has opened a training camp in Florida. "I want to show young athletes that they can make it without doping," he says.

Does he include himself in this assessment? "Of course, I'm the Olympic champion."

There are few sprinters who can break world records. They're like phantoms, surfacing for races and then disappearing again. Marion Jones was the most elusive phantom. She won everything, including Olympic medals and world championships. But no one knew who she was. Her first marriage was to heavy-set shot-putter C.J. Hunter -- also banned from track sports for doping -- and then she was together with Tim Montgomery, a sinewy man with a crazy look in his eyes. Jones had a beautiful smile, but she spent most of her time holed up in hotel rooms.

The queen of the female sprinters was forced to return all her Olympic medals. In March, she became inmate number 84868/054 at the Federal Medical Center Carswell in Fort Worth, Texas. After lying to investigators about her doping career for months, Jones was convicted of perjury. Her story is one that no one could possibly make up. But the 100-meter race is replete with stories like Jones', tales of temptation, fraud and tragedy.

It's a sunny day, and Johnson is sitting on a picnic table next to the track at the University of Toronto's track and field center, eating a cheese sandwich. He is wearing shorts and a running shirt that's a little tight around his abdomen. There was a story in the paper that US President George W. Bush received a petition to pardon Marion Jones, but that she will probably have to remain incarcerated until September. Bush, says Johnson, is an idiot.

"I'm going to write Marion Jones a letter. Maybe I can comfort her. I would marry her if I had the chance. She's cool. She's a woman who is prepared to do everything to reach her goal. You don't see that kind of mentality much anymore."

Johnson is waiting for a group of kids he is training, hoping to show them the right way to run. He expected the runners at 2 p.m., but it's now shortly before three. "They're probably sitting around in front of their computers, or eating ice cream with their girlfriends," says Johnson. He doesn't like today's generation of athletes. They're too easily distracted, he says. "We were more goal-oriented in our day," says Johnson.

An Olympic victory makes an athlete immortal. Ben Johnson is no longer an Olympic champion, and yet the world will not forget him. He ran the 100 meters in 9.79 seconds at the 1988 Seoul Olympics. He managed to hold on to the gold medal for all of two days. Then officials knocked on the door of his hotel room and took away his medal. Stanozolol, a synthetic anabolic steroid, was found in a urine sample Johnson had given after the race.

"The 100 meters is a glamour event. I'm very happy to be part of the history of this race," says Johnson. "I have no regrets." He was part of a good team in Toronto at the time. His life revolved around the sport, and pills were part of that life. He took them before or after training. No one asked questions. It was normal. "I trained so hard," he says. "You had to take something to recover, to be able to keep going. People aren't machines."

Everyone else was doing it, says Johnson, but he was the one who was caught. He also has a conspiracy theory, but it bears no resemblance to Gatlin's. Johnson doesn't claim that he never doped. In fact, he says, "I took all kinds of steroids." But stanozolol, according to Johnson, wasn't one of them. Some mafia group, he insists, mixed the stuff into something else he was taking, because he was too good, and because there was more money to be made with an American than with a Canadian. That, in a nutshell, is Johnson's theory.

The 100 Meters Is Already Dead

He glances at his watch. Johnson is tired of waiting. He walks over to the gym, where a few women are stretching. He waits a while longer, trimming his fingernails. By this point, he comes across as some odd uncle no one takes seriously. In reality, Johnson is the greatest threat to this epic race. On the one hand, there are the files from the BALCO doping scandal, and the testimony of dealers like Mexican Angel Heredia, which prove that the sprinters got their designer drugs from abroad. On the other hand, there are the tears of Marion Jones. But nothing is as tangible as Ben Johnson's frankness, and the completely matter-of-fact way in which he says that it isn't possible to become an Olympic champion "without good medicine."

In truth, the 100 meters is already dead. No one believes in this race anymore, not even Johnson. And yet the event lives on. Some day a runner will sprint faster than world record holder Usain Bolt. Maybe Tyson Gay will make it in 9.70 seconds in Beijing. After that, there will have to be someone else, someone who can run it in 9.69 seconds, and so on. It can never stop.

The 100-meter race is a great symbol of man's ability to constantly improve. Nothing can be allowed to stand still. "It's a race for humanity," says Johnson.

He'll be watching the Olympic final on Saturday in Jamaica, while visiting his family there for a few weeks. Johnson was born on the Caribbean island. As a child, he trained on the same grass track at the Technical University in the Jamaican capital of Kingston where Bolt and Powell would later begin their careers. Perhaps Jamaica is the birthplace of the next Olympic champion.

Does he believe in Gay, Powell, Bolt?

Johnson laughs. "You're considered innocent until you test positive," he says, "but you can't run in less than 9.80 seconds without the right drugs. It's impossible." He should know, he says. "I was there."

-- Translated from the German by Christopher Sultan