A few weeks before his death, Steve Jobs commissioned one last marvel of ingenuity. He knew that it would be his legacy, a symbol of his work and an expression of creative global supremacy: a new headquarters for Apple, designed by British star architect Sir Norman Foster. "The best office building in the world," Jobs called it when he first revealed the plans, "a little like a spaceship."

It will also probably be the most expensive company headquarters in the world, a gigantic, circular monolith with an estimated price tag of $5 billion (€3.7 billion), eclipsing even the cost of rebuilding the World Trade Center in New York, which has been under construction for the past 10 years.

But nothing that Apple does these days goes unchallenged for long, especially when it comes to symbols.

Facebook boss Mark Zuckerberg, whose vision is to network all of mankind online, has commissioned the equally famous architect Frank Gehry to create a new headquarters for his company. Of course this is not just any building. It's "the largest open office space in the world," as Zuckerberg says, an enormous room for 3,400 Facebook employees. The building itself will be covered with trees and meadows, allowing it to merge with the landscape. "From the outside it will appear as if you're looking at a hill in nature," Zuckerberg wrote on his Facebook timeline. 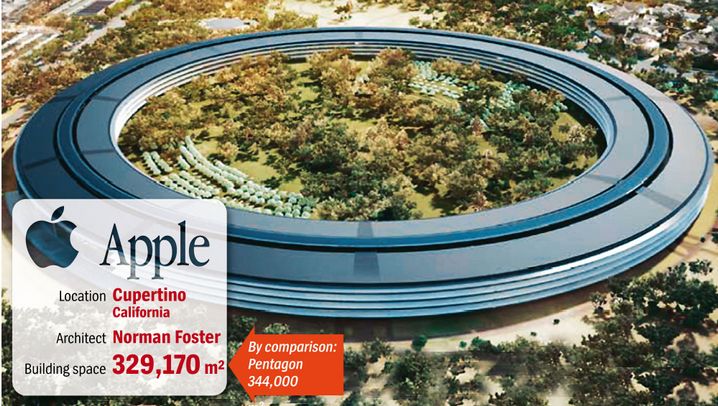 Photo Gallery: The Tech Giants Building Their Own Digital Monuments

Meanwhile, Amazon chief Jeff Bezos -- who is also not adverse to plans of economic global domination -- is building the world's first biosphere headquarters: three domes made of glass and steel, each with an artificial ecosystem, including its own microclimate and corresponding botanical zone. The biosphere offices, created by award-winning architectural firm NBBJ, are to be built in the shadow of an attendant skyscraper in Seattle, which will dominate the city's skyline.

Google is also working with NBBJ to create "Bay View," the project for the Internet giant's new, larger corporate headquarters. The next-generation "Googleplex" features a less ostentatious design than the competition, yet it is pretentiously presented by glamour magazine Vanity Fair: nine buildings linked by bridges, a number of the roofs with park landscapes, the entire complex extending over numerous acres of restored wetlands.

And right next door, one of the world's leading chip manufacturers, Nvidia, is building an enormous corporate headquarters -- half football stadium, half airport terminal: two triangles made of glass and steel, inspired by the computer chip.

These plans -- which are accessible to the public thanks to administrative urban planning procedures -- include detailed computer simulations, cost estimates and blueprints that leave no doubt that these are supposed to be more than mere corporate headquarters. No, they are to be monuments, architectural techno-visions that reflect the now inexorable digital domination. They are an expression of the worldwide economic and cultural supremacy that Silicon Valley and its leaders overtly claim for themselves.

Even if every company is making a visible effort to build its own architectural wonder, the overriding commonalities are unmistakable: All designs promise a mixture of idealized nature and high tech. Apple, for instance, intends to power its new campus entirely with on-site solar panels and wind turbines.

What's more, the architecture is consistently spreading outwards instead of reaching for the sky. This is the only way to create the perfect ideas factory: the ideal spatial environment for optimally productive digital workers who continuously churn out world-changing innovations.

"The idea is to make the perfect engineering space," says Zuckerberg. The simple logic: Individuals who collaborate are creative. Consequently, all boundaries must disappear, including floors and walls. Private offices no longer exist, not even for top management. The open creative playground is the prevailing fundamental design of the digital economy. Those who don't already have it, have to create it. Stragglers like Microsoft, Yahoo and SAP are gutting their buildings and eliminating many offices. 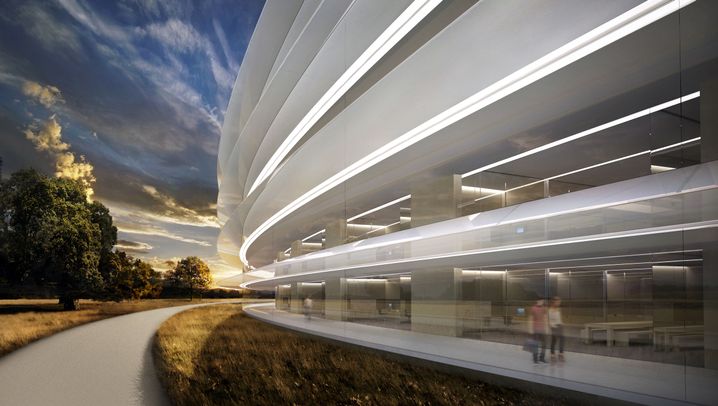 "It's all based on behavioral science," and is proven by numerous studies, says Hao Ko, design director at the Gensler architectural firm, and the man responsible for the new Nvidia headquarters. He says it has to do with "creating a setting in which people constantly meet and spontaneous conversations occur" -- and managers can't hide behind closed doors. Coworkers on the same floor see each other practically every day, but almost never if they work on different floors, Ko argues.

The traditional working world is being turned on its head: Instead of having to organize a wide range of meetings, private space now needs to be carved out of the existing open-plan office. Continuous interaction is the norm. Anyone who wants to remain unobserved has to make a special effort. "Everyone sits out in the open at desks that can be quickly rearranged depending on which teams happen to be forming around a project," says Everett Katigbak, a former environmental design manager at Facebook.

It's not difficult to see this close proximity -- the lack of barriers and the loss of individual private space -- as an expression of the double-edged digital culture. While the Internet creates newfound freedom, people have no right to a private life in the digital age. Everything is open, marketable and transparent.

Today high-tech company headquarters already cater to their employees' every need, ensuring that nothing keeps them from being creative until late at night, and even on weekends. They offer a daunting range of services, including daycare facilities, dog training schools, swimming pools, climbing walls, pizzerias and open-air movie theaters. A mobile dental clinic ensures healthy teeth, while oil changes on the staff parking lot keep the vehicles running smoothly. And anyone who needs a break can have a lie-down in the "power nap corner."

The new buildings provide all of these services, but everything is snazzier, bigger and more sophisticated: restaurants galore, parks, supermarkets and state-of-the-art gyms. Come whenever you want, work whenever you want, and there is free food, smart phones and childcare. But please work until you drop so we can demolish the competition and all get rich.

Indeed, the all-inclusive facilities of Google, Apple, Facebook and their planned expansions are a precise reflection of the spirit of Silicon Valley -- a spirit that is an intriguing paradox: It combines a disciplined domination of the market with the freedom of the creative hippie artist.

In the 1990s, media theorists Richard Barbook and Andy Cameron coined the term "California ideology" to describe this phenomenon. "This new faith has emerged from a bizarre fusion of the cultural bohemianism of San Francisco with the hi-tech industries of Silicon Valley," they wrote. This has created a peculiar ideological mixture of right-wing and left-wing, ultra-individualistic and ultra-capitalistic beliefs, ranging from liberalism to anti-statism.

This was spiced with a good pinch of techno-determinism, preached by young company founders and Internet billionaires alike: In our fantasy world everyone can become rich and hip, and the world will be a better place, if you just let us do our thing.

Larry Page, cofounder and CEO of Google, said last spring that he would like to see "a part of the world" set aside for technological, social and other experiments to more quickly create the digital utopia. "There are many exciting things you could do that are illegal or not allowed by regulation," Page said. Regulation is a good thing, he admitted, but he wondered whether it would be possible to create "safe places" where everything would be possible.

But as long as no one gives Page and his fellow technology gurus their own Google-land, they will have no other recourse but to create a conventional habitat that they can at least call their own. This includes company bus lines that plow through congested freeways to bring employees to work every day. Promoting public transport is apparently not an option. It should also come as no surprise that Google has an independent sewage system. Likewise, these companies are not aiming to develop the public urban landscape with their projects worth billions. This explains perhaps why an architecture critic in the New Yorker wrote that the new Apple campus is reminiscent of the Pentagon: an impenetrable, protected world.

In the Bay Area -- the region surrounding San Francisco and Silicon Valley -- people have been living for decades with strange ambivalence towards an industry that provides incredible prosperity and jobs, yet cares little about the public good. In answer to the question of how the city of Cupertino could benefit from the new Apple headquarters, Steve Jobs pointed out, "Well, as you know we're the largest taxpayer in Cupertino and we'd like to continue to stay here and pay taxes. If we can't then we have to go somewhere else like Mountain View and we'll take our current people with us and the city's largest tax base would go away."

This occasionally astounding autism can also be increasingly seen in the industry's business practices: Data privacy protection? Only as we see fit.

While sumptuous new corporate headquarters are going up, the region is left to deal with the excesses on its own: with the overburdened infrastructure and skyrocketing rents that make it nearly impossible for people earning a normal income to live in San Francisco, because the tech companies rent entire city blocks for their employees -- and are prepared to pay any price.

This has sparked perceptibly increasing, smoldering anger throughout the region. People rant about the techno-hipsters and their private bus lines, about the outrageously expensive apartments and rapidly rising cost of living. And they poke fun at the gigantomania of the Apple spaceship. No one is seeking an open confrontation with this all-dominating industry, though.

Last week, the Cupertino city council gave the green light to the Apple headquarters, voting unanimously in favor of the plans, just as they were proposed by the company. The project is slated to be completed in 2016. As he was presenting the designs, the mayor said: "The mother ship has landed." 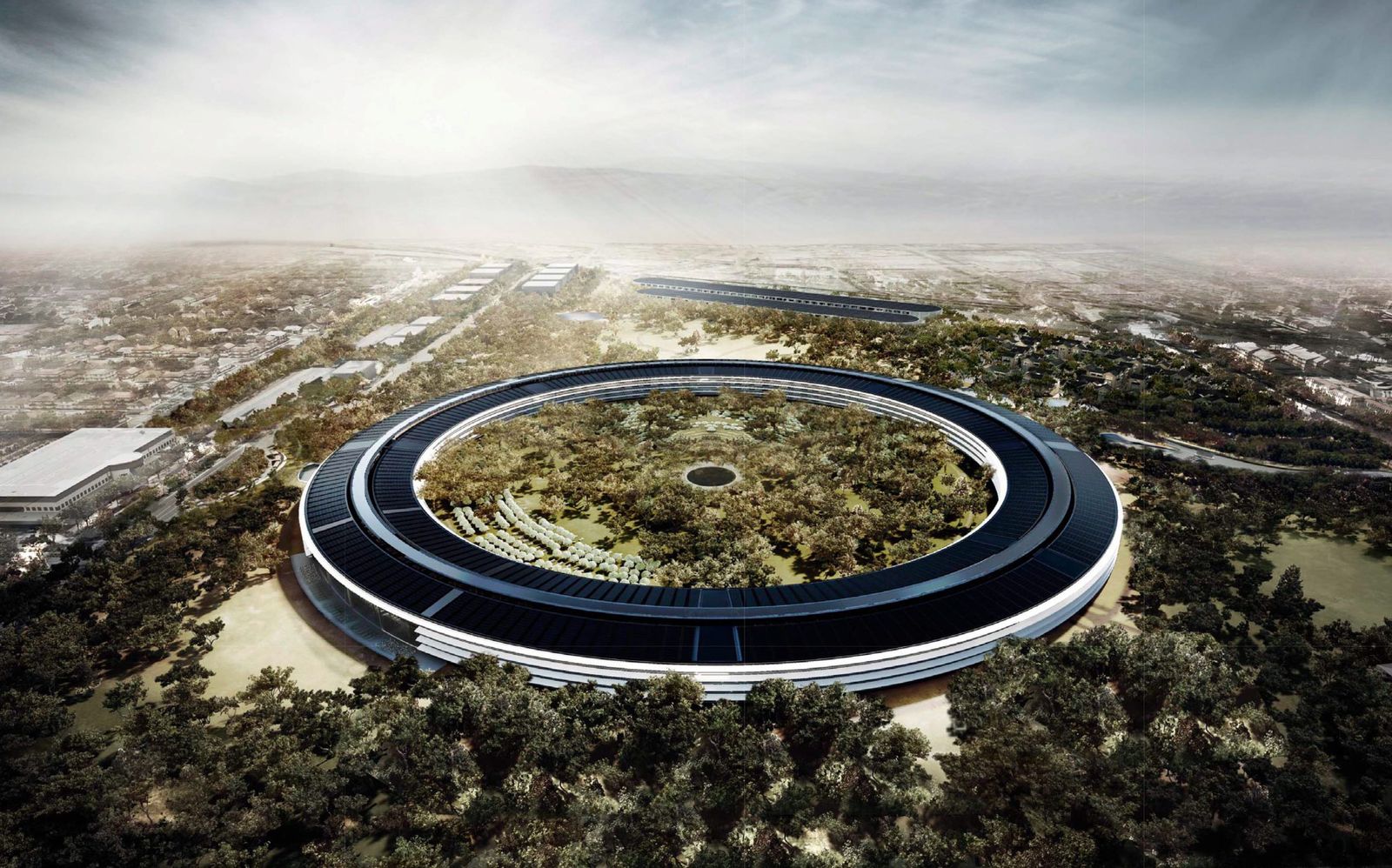