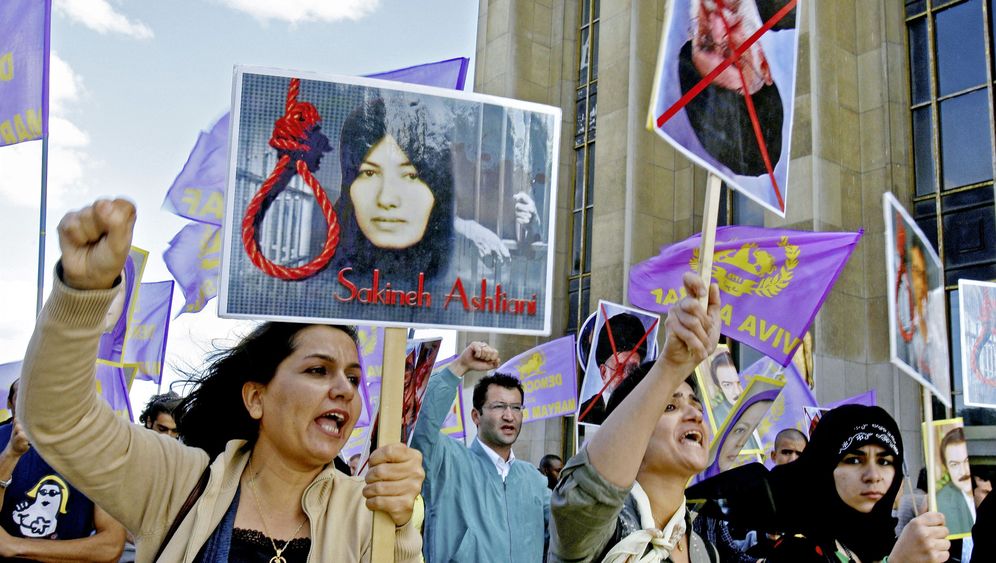 Mohammad Ghouchani, 34, is still a free man. But he may not be for much longer. The Iranian regime's security forces have been following the journalist's every move for weeks now. According to Ghouchani's colleagues in Tehran, it was only a week ago that Iranian agents called him on the phone. Their message? Drop the project or we'll arrest you.

Few would be surprised were Ghouchani soon to be served a subpoena from the state prosecutor and forced to answer charges before the Islamic Revolutionary Court. Jail time, experience shows, could also be in his future -- all because he has taken on a tempting and delicate mission: He plans to resume publishing Ham-Mihan, a newspaper that was banned three years ago.

Founded in 2000, the daily Ham-Mihan, or "Compatriot", established itself as a reformist voice under the comparatively liberal former President Mohammad Khatami and achieved a circulation of over 100,000. Now the authorities have granted a new license to the former publisher, Gholamhossein Karbaschi, who was the mayor of Tehran for many years and is a close ally of Khatami.

In a spacious apartment in the affluent north of Tehran, a team of 30 editors, layout artists and technicians are working under Ghouchani to produce the first edition, with an initial print run of approximately 25,000. Although the Iranian constitution ensures freedom of the press, officials in the Ministry of Justice and on the Press Supervisory Board are only waiting for the first critical story to appear on President Mahmoud Ahmadinejad and his mentor, Iran's supreme leader Ayatollah Ali Khamenei.

Indeed, there is little doubt that the authorities will shut down Ham-Mihan again and arrest editor-in-chief Ghouchani, who has already spent half a year behind bars. While in jail, he found himself in very good company.

Ever since the protests against Ahmadinejad's re-election in June of last year, prison cells have been bursting with critics of the regime -- and journalists represent the largest professional group among the inmates. Over 120 employees of daily newspapers and some 20 bloggers have been detained, says Mahmood Amiry-Moghaddam. From his home in exile, the co-founder of Iran Human Rights has been monitoring the "brutal oppression of freedom of speech." At least 50 reporters and photographers have fled abroad to escape the regime's agents, he says.

Nobody knows exactly how many journalists are behind bars. Amiry-Moghaddam rattles off 30 names, including Emadeddin Baghi, who was sentenced to six years in prison by a revolutionary court. His crime: an interview with Grand Ayatollah Hossein-Ali Montazeri, who died last December and ranked among the most vociferous critics of the regime. It seems a bitter irony of history that the Islamic Republic, which emerged from the revolution against the dictatorial rule of the shah in 1979, is currently persecuting journalists more severely than virtually any other country in the world.

Foreign journalists, particularly those who received their accreditations in less restrictive times, have likewise become targets of Ahmadinejad's allies in the intelligence agencies and in the Pasdaran -- the Islamic Revolutionary Guard Corps. The correspondent from the Spanish daily El País, for example, has been forced to pack her bags -- she provoked the ire of the regime by interviewing Montazeri's son. Only those who restrict themselves to harmless reports are allowed to stay.

Indeed, Tehran's sensitivity about critical media reports on the country's nuclear program and its enrichment of uranium means that journalists from the West are now only allowed into the country to attend propaganda events -- and even then journalist visas have become a rarity. The Iranian embassy in Berlin awarded only three entry permits for a bombastically staged disarmament conference held this spring under the banner "Nuclear Energy for All -- Nuclear Weapons for No One." SPIEGEL has only been able to interview opposition leaders and regime critics following lengthy preparations and under strict secrecy.

Entering the country without permission from Ershad, the Ministry of Culture and Islamic Guidance, is a foolish endeavor. The many arms of the mullahs' intelligence agencies have the country in an even tighter grip than during the days under Mohammad Reza Pahlavi, the late shah of Iran. But that didn't stop two men working for the German Axel-Springer publishing house from trying their luck last week. Were they unfamiliar with the procedure? "If they were not aware of it, they were naïve and allowed themselves to be led down a dangerous path," admonished even the normally circumspect German daily Frankfurter Allgemeine Zeitung.

Indeed, both men are apparently unfamiliar with the region. The reporter wrote for the mass-circulation Bild and, more recently, the Bild am Sonntag, focusing on local Berlin stories and scandals in hospitals. The freelance photographer mostly took pictures of musicians and celebrities.

The two Germans were arrested the week before last in Tabriz, the capital of the province of East Azerbaijan, over 500 kilometers (310 miles) northwest of Tehran, as they were preparing to interview Sajjad Ghaderzadeh, 22. The young man is reviled by loyal supporters of the regime because he has helped to spark an international human rights campaign. He hoped that this would help protect his mother, Sakineh Mohammadi Ashtiani, 43, who was sentenced to death by stoning in 2006 for alleged adultery. The security forces also detained Ghaderzadeh and his mother's lawyer, in whose office the meeting took place.

A Prelude to Espionage?

The fate of the Germans depends primarily on which faction prevails in Tehran. Iran's ambassador in Berlin, Ali Reza Sheikh Attar, is said to be a close ally of Ahmadinejad's, but also a pragmatist. He is reportedly very interested in a quick solution. The fact that Attar, a former journalist himself, was once a governor in the region and still maintains close contacts in Tabriz may help the journalists get off lightly. The German ambassador in Tehran, Bernd Erbel, is likewise well-connected in the country.

Still, the influence of the zealots is not to be underestimated. They don't see the reporters as clueless journalists, searching for some scoop. Shortly after their arrest, Iranian Prosecutor General Gholam Hossein Mohseni-Ejei expressed doubts about whether the Germans were even journalists -- perhaps a prelude to espionage charges.

American-Iranian journalist Roxana Saberi, 33, experienced first-hand how quickly the hard-liners can decide to press such charges. Saberi had worked in Tehran as a correspondent for six years, including for Britain's BBC and America's National Public Radio. She was arrested in April last year after allegedly purchasing a bottle of wine, despite a ban on alcohol. She was later accused of working without a valid accreditation. Finally, the state prosecutor added charges of espionage.

Diplomatic observers in Tehran saw this as an attempt to sabotage improved relations with the US under the relatively new president, Barack Obama. Shortly after she was sentenced to eight years in prison, Saberi was allowed to leave the country. Tehran billed her release as a generous gesture to Washington.

Not surprisingly, government officials in Berlin who are familiar with hostage-taking and prisoner exchanges have braced themselves for prolonged negotiations in the current case of the two German journalists. "It's a question of the political price," says an expert who is familiar with the case -- and points to the ordeal of Donald Klein. The deep-sea fisherman from Lambsheim in southwestern Germany had strayed with his boat into Iranian waters while vacationing in Dubai in late 2005. He was detained for over a year at Evin Prison on suspicion of espionage. At the time, Iranian intelligence agent Kazem Darabi was serving a sentence in Germany for his role in the assassination of four Iranian opposition figures at a Berlin restaurant in 1992.

Darabi has since been released and Tehran can no longer speculate on swapping prisoners. The fact that the German government has recently played a prominent role in orchestrating European sanctions against the Islamic state has not exactly made negotiations go more smoothly.

Nevertheless, some people in Germany are cautiously optimistic that the journalists' release can soon be secured. Indeed, a group of parliamentarians arrived in Tehran on Sunday for a long-planned visit. The group, which includes German Green Party co-chair Claudia Roth, intends to speak on behalf of the Germans during its talks with the Iranians.

The German reporters are said to have admitted to violating Iranian visa regulations. This could be the first step towards a solution. There are allegedly already indications from Iran that the Germans could be released after paying a fine.

If the journalists return home by the end of this week, it would be an unusually soft landing at the end of a bizarre fact-finding trip.

Even with such a happy end, though, the case would confirm what the Ham-Mihan editor-in-chief has to say. He warns colleagues explicitly of the dangers of their profession. "Journalism in Iran is risky," Ghouchani says.