Martin Herrenknecht is difficult to stop. In only 30 years, he has turned a small engineering firm in southwestern Germany into the world market leader in tunnel construction. His enormous drilling machines have driven pipes into the ground for subways in Hamburg, car tunnels in Shanghai and water pipelines in California. His drill heads are currently carving what will be the world's longest railroad tunnel into the rock beneath the Saint Gotthard mountain group in the Swiss Alps. 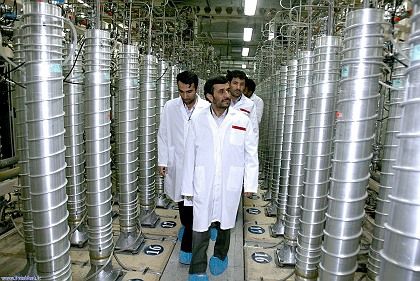 But there is one place where Herrenknecht is making no headway at all -- Iran. Two lucrative contracts are in play there: the drilling of tunnel tubes for the Tehran subway and for a water pipeline in the countryside. Together, the projects are worth a sum totaling in the upper double-digit millions, says Herrenknecht. And about 200 jobs.

He has spent the last six months waiting for approval of his export applications by Germany's Federal Office of Economics and Export Control (BAFA) in Eschborn, outside Frankfurt. "It's difficult," he says. "You don't even get an answer."

Before submitting his application, Herrenknecht, a 66-year-old member of the conservative Christian Democratic Union (CDU), contacted the office of German Chancellor Angela Merkel to determine whether the shipment of his "full face boring machine," a device used in drilling tunnels, could be politically sensitive. He was told that it was not. He has heard nothing more since then. "A subway is clearly not for military purposes," says Herrenknecht, sounding baffled.

Indeed, nothing is clear in the dispute over the Tehran tunnel. Because Iran is pushing ahead with its nuclear program and refuses to abandon its uranium enrichment activities, the United Nations imposed targeted sanctions against the regime that are intended to prevent the military use of nuclear technology. The European Union then issued directives that list in detail which contacts with Iran are prohibited.

Tunnel drilling equipment is not on the lists. Nevertheless, Herrenknecht's business venture is piquant. A contract coming from Tehran worth a sum in the double-digit millions would quickly send the message that the Germans are not pursuing sanctions against Iran with the necessary seriousness. In addition, it is hard to rule out the possibility that underground structures could be used for military purposes. For these reasons, Herrenknecht's export applications have been put on ice.

The Iran sanctions have placed Germany in a delicate position. The limited punitive measures did not achieve their goal of convincing Iran to give up its controversial nuclear program. In fact, they are even doing harm, the director-general of the International Atomic Energy Agency (IAEA), Mohamed ElBaradei, said last week. "Many Iranians who even dislike the regime (are) gathering around the regime because they feel that country is under siege," ElBaradei said. 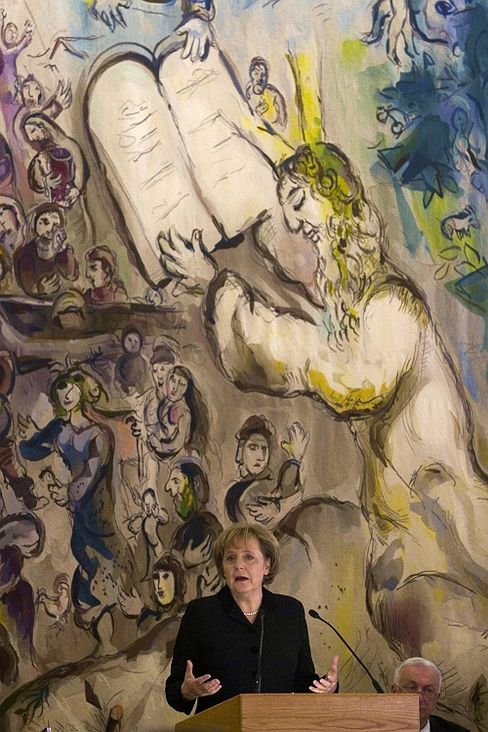 German Chancellor Angela Merkel during an appearance before the Israeli parliament, the Knesset: "Israel's security will never be open to negotiation."

Germany's closest allies are criticizing the government in Berlin for not having imposed a total embargo on a country that questions Israel's right to exist. Meanwhile, German businessmen like Herrenknecht complain that the expansion of sanctions harms their business interests.

On the issue of Iran, no country is as much in the spotlight as Germany. It has strong economic ties to Iran, but it is also especially uncompromising in its support of Israel's right to exist -- which is being threatened by Iran. In a speech to the Israeli parliament, the Knesset, in March, German Chancellor Angela Merkel said: "For me, as Germany's chancellor, Israel's security will never be open to negotiation." With reference to Iran's nuclear program, she added that this obligation is especially important "at this critical point."

Since then, the Israelis have been asking themselves how much longer the chancellor intends to postpone that critical point. Yoram Ben-Zeev, the Israeli ambassador to Germany, was thoroughly undiplomatic last week when he made it clear to the public that his government is outraged. "Germany is doing something to isolate Iran, but apparently it is not doing enough." The usefulness of Germany's sanction efforts is "doubtful," the Israeli newspaper Haaretz quoted the ambassador as saying. "There are things that are not legitimate, period." 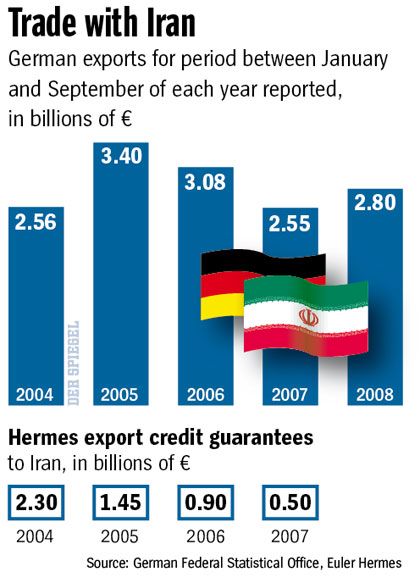 Germany will remain vulnerable to criticism for as long as exports to Iran continue at full steam ahead. Unlike Martin Herrenknecht's drilling equipment, the vast majority of export applications are not impeded and are approved by BAFA. Close to 2,600 export applications have been approved to date in 2008, while only 90 have been rejected. In the first three quarters of the year, German trade with Iran grew by about 10 percent over the same period in 2007, to €2.8 billion ($3.7 billion). "We see the numbers, and the numbers are rising," says Ben-Zeev.

The Israeli ambassador is not alone in his criticism. The Wall Street Journal has launched a small series entitled "Germany loves Iran," which sharply criticizes German business relations with the mullah-controlled country. Germany's greatest concern, the paper writes, is "not over an Islamic bomb, but over the risk of tougher UN sanctions."

Berlin has been trying for some time to shed the reputation of being a boycotter of sanctions. One step taken by the government was to dramatically reduce the Hermes export credit guarantees for business with Iran. Chancellor Merkel has had her staff calculate that the sum of new guarantees declined by 90 percent between 2004 and 2008. In 2004, Iran, the recipient of €2.3 billion ($3.1 billion) in German exports, was in second place on the Hermes list. Today the country is roughly in 25th place.

The German government is also inspecting exports more thoroughly now. Even the Bundesnachrichtendienst (BND), Germany's foreign intelligence agency, is becoming more involved in vetting recipients of German goods in Iran. The government wants to avoid scenarios in which, for example, a harmless truck engine could be used in a truck operated by the Revolutionary Guard.

Measures to Discourage Companies from Doing Business in Iran

After preliminary inspections by government offices and ministries, potentially sensitive orders are held up for a significant amount of time by the relevant state secretary at the Foreign Ministry. This is part of the exercise. When business owners call to ask about the progress of their applications, they are told, as a precaution, that although their export product is not on a current list of banned products, it could be at the actual time of delivery. Government bureaucrats call this a "strategy of discouragement." It is meant to be the sanctions regime of the future.

In mid-October, Reinhard Silberberg, a state secretary in the Foreign Ministry, convened a meeting of the relevant senior officials from the Chancellery and the German government's other ministries. The foreign office argued in favor of "discouraging" business with Iran. Bernd Pfaffenbach, a state secretary in the Economics Ministry, was none too pleased, but the Chancellery was also in favor of the strategy turnaround, eager to see actions follow on the heels of Merkel's tough words on Iran. The group agreed that the Economics and Finance ministries would invite German trade associations to a meeting to explain the sensitivity of doing business with Iran. The clear message was that German business owners should avoid deals with Iraq, even if they are legal.

Not much has happened since then. The Economics Ministry is performing its duty with little enthusiasm, and the "discouraging" signals have not convinced some trade groups. Next Wednesday, Silberberg plans to convene another meeting to review the October agreement. 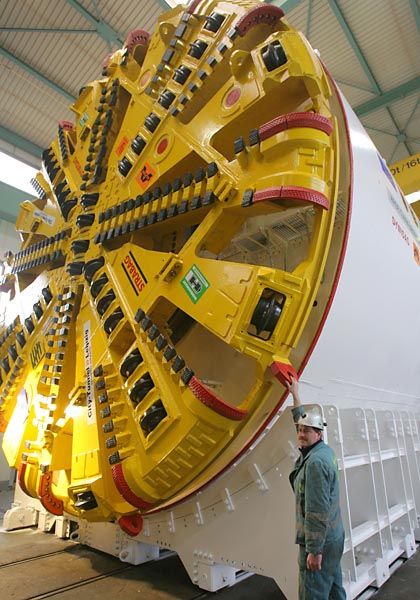 Martin Herrenknecht, whose company makes massive drilling machines, has been unable to export his products to Tehran.

The German economy is not about to take such efforts to influence it lightly. "The federal government is increasingly moving into a gray zone when it comes to implementing Iran sanctions. It appears to be trying to obstruct business deals that are completely legal," complains Klaus Friedrich of the German Engineering Federation (VDMA). "With such actions, the federal government damages the overall system of export control."

German business owners want to preserve their privileged status in Iran, where competitors are taking advantage of every German step toward withdrawal to capture market share. China replaced Germany last year as the leading exporter to Iran.

Among Western countries, the sanctions are stirring up suspicion and anger. What makes this all the more aggravating is that their benefits are by no means proven. Tehran is smugly pointing out that the decline in trade hurts Europe more than it does Iran, because Asia offers good alternatives. "Why are you Europeans giving up such a big market?" Iranian Deputy Foreign Minister Mehdi Safari asks condescendingly.

Despite all the government propaganda, however, the sanctions are actually hurting Iran's economy. The official rate of inflation is about 30 percent, and one in three Iranians between the ages of 19 and 29 is unemployed. There is believed to be a shortage of spare parts in the country's vital oil industry as well as in the chemical and machine-building industries.

Politically speaking, however, the sanctions have been relatively ineffective, as IAEA Director-General ElBaradei says. The die-hard reactionaries surrounding President Mahmoud Ahmadinejad are no longer the only ones insisting on Iran's right to close the nuclear fuel cycle. The reformers, too, have fallen in step with Ahmadinejad's hard-line approach, and they no longer seriously consider abandoning uranium enrichment.

The sobering outcome of five years of diplomacy and two years of sanctions is angry Israelis, Germans stressed by sanctions and defiant Iranians. Only a new initiative by the future US president can bring movement into these hardened fronts.

Foreign Minister Frank-Walter Steinmeier has come up with a surprising welcome message for President-elect Barack Obama: He wants to propose new sanctions. In Steinmeier's assessment, the new US president has finally agreed to take responsibility for making overtures to Tehran. But to convince Ahmadinejad to relent, Obama must keep additional sanctions in his back pocket. Steinmeier sees the threat of sanctions as a backup strategy for Obama, enabling him to use a carrot-and-stick approach in his negotiations with Iran.

On Thursday, Volker Stanzel, political director at the Foreign Ministry, presented Germany's proposal for a new regime of sanctions to his British and French counterparts. Under the program, the Europeans would jointly develop new trade restrictions in the banking and transport industries, and would attempt to gain Russian and Chinese support for the effort.

German business owners like tunnel builder Martin Herrenknecht, on the other hand, have given up hope of gaining support from their own government and are instead turning to Washington. Herrenknecht believes that the Americans should finally offer the Iranians direct talks. "I have high hopes for Obama," says Herrenknecht.