The United States fought in Iraq for nine years. With the exception of the war in Afghanistan, it was America's longest combat engagement ever: longer than the American Civil War, the two World Wars, the Korean War and the Vietnam War. Any country that enters into a war emerges from it changed. It is inevitable that there is a before and an after. There are the dead, the wounded, the survivors.

But that's not all. There are wars that are just and necessary, like America's fight against Nazi Germany. And there are wars that are senseless and wrong, like the war against Iraq. Society, politicians and the military have drawn lessons from both wars. They recognize and welcome these lessons to varying degrees, whether they are right or wrong. War transforms a nation.

Bruce Riedel, formerly a senior CIA official and presidential adviser, views the transition as such: "The Iraq War elected Barack Obama and transformed American foreign policy. There is a national consensus (that) it was a dumb war, (that) the costs were enormous and that it was one of the country's biggest mistakes." The shadow of this war, he continues, "weighs heavily" on the stances that America is now assuming toward Iran, Syria and Libya. The war's legacy "will haunt America for years."

Ten years ago, on March 19, 2003, then-President George W. Bush announced the beginning of the war, saying that America "will accept no outcome but victory." Eight years and nine months later, on Dec. 18, 2011, the last US soldiers pulled out of Iraq. President Barack Obama declared: "The tide of war is receding."

What remains from the war? How has it changed America and Americans? And how has it altered American policies. Here are 10 lessons for the 10th anniversary of the launching of combat operations against Iraq:

The phrase comes from Barack Obama. In the fall of 2002, then-Illinois state senator Obama told a crowd of people protesting against an impending invasion of Iraq: "I'm not opposed to all wars. I'm opposed to dumb wars." A total of 1.5 million US soldiers served in Iraq. An estimated one-third of them suffer from posttraumatic stress disorder. Over 30,000 of them were injured. And 4,422 died. What was the point? In January 2002, President George W. Bush declared: "The United States of America will not permit the world's most dangerous regimes to threaten us with the world's most destructive weapons." On Feb. 5, 2003, then-Secretary of State Colin Powell sat before the UN Security Council and assured its members (and the world) that: "There can be no doubt that Saddam Hussein has biological weapons and the capability to rapidly produce more, many more." But the dictator's suspected weapons of mass destruction were never found. In his 2006 biography, Powell characterized his UN presentation as a "blot" on his record. Today, many Americans are critical of the war. A poll conducted in early January by YouGov found that 52 percent of American's think the invasion of Iraq was a mistake, while only 31 percent still believe it was the right thing to do.

America's invasion of Iraq isolated it in the world. President Bush's policies were viewed with greater skepticism in the West and created new enemies in the Arab world. In summarizing the moral damage the war inflicted on the US, SPIEGEL wrote: "For this war, America has broken international law, defamed allies and made the United Nations an object of derision." The torture scandal from Abu Ghraib, a prison on the western edge of Baghdad, has caused lasting damage to the proud democracy's moral reputation. US soldiers viewed themselves as liberators who uncovered the dictator's violations of human rights. But they were seen as occupiers, as a power that threw the country into chaos and a civil war that cost more than 100,000 Iraqis their lives.

3. The war discredited the CIA

Under pressure from the Bush administration, America's foreign intelligence agency provided the supposed proof that Iraq possessed weapons of mass destruction. When Colin Powell went before the UN and gambled away his credibility, then-CIA chief George Tenet was sitting behind him. In 2011, Rafid Ahmed Alwan al-Janabi, codenamed "Curveball," who had provided key testimony to the CIA, revealed that he had lied and purposefully provided false information about Iraq's biological weapons. "They gave me this chance," al-Janabi told the Guardian newspaper. "I had the chance to fabricate something to topple the regime."

4. The war divided the nation

One of the reasons that the Democrats and Republicans in Washington have become such bitter rivals can be traced back to their conflicting stances on the war. Democrats threw their support behind Bush at first, but they would later come to feel tricked. The massive degree of residual antagonism recently surfaced in the battle over Chuck Hagel, Obama's nominee to become his secretary of defense. Hagel, a Republican himself, had once branded the 2007 surge in Iraq as the "most dangerous foreign-policy blunder in this country since Vietnam." His fellow Republicans didn't forget what he said -- and tried to block his appointment for weeks.

5. The war fueled Obama's victory in the presidential election

He may have lacked experience, but during the Democratic primaries of 2008, Barack Obama had one clear advantage coming out of the gates: Unlike his fiercest rival, Hilary Clinton, he had never voted for the invasion of Iraq. In fact, he could even point to his 2002 statement about how it would be a "dumb war." In a television debate held in Cleveland in February 2008, Obama accused Clinton of having been "ready to give in to George Bush on day one on this critical issue." This allowed him to score points among war-weary Americans, first with Democrats and later during the presidential campaign against the Republican nominee, Sen. John McCain. Obama promised to "end the Iraq War in a responsible fashion."

6. It was the war of the neocons

For years, toppling Saddam Hussein had been a goal of the neocons surrounding Paul Wolfowitz, Richard Perle and William Kristol, the intellectual godfathers of the movement. Vice President Dick Cheney and Secretary of Defense Donald Rumsfeld helped win acceptance for neocon fantasies about using the military to foster democracy around the world. The hawks surrounding Bush viewed the terrorist attacks of 9/11 as legitimizing an attack on Iraq -- despite the fact that there was no connection between Hussein's regime and al-Qaida. Indeed, in his 2004 memoir "Against All Enemies," former Bush counter-terrorism czar Richard A. Clarke wrote that bombing Iraq after being attacked by al-Qaida "would be like our invading Mexico after the Japanese attacked us at Pearl Harbor."

7. The neocons learned little from the war

The neocons haven't disappeared at all. William Kristol, for example, the founder of the conservative political magazine The Weekly Standard, continues to gush praise on the decision to invade Iraq. And these freedom fighters have had another target in view for a long time: Iran. Kristol scoffs at the idea that anyone would believe an Iranian nuclear bomb could be controlled. Meanwhile, Rumsfeld and Cheney have both published memoirs, but one would be hard-pressed to find any hints of self-criticism. Nor have their ideas about waging preemptive wars been abandoned. To a certain extent, President Obama is doing the exact same thing with his drone war against terrorists: taking out potential opponents before they have a chance to strike.

8. The Iraq War paved the way to the shadow war

The Iraq War shaped US policy on waging war. At first, then-Defense Secretary Donald Rumsfeld focused on having a "light footprint" by having only 145,000 US and Allied soldiers take part in the invasion of Iraq. The result was chaos. The soldiers succeeded in conquering the country, but they failed to establish peace. After Rumsfeld resigned in November 2006, General David Petraeus implemented a counterinsurgency (COIN) strategy that involved dedicating more soldiers to protecting the civilian population and coordinated fighting against insurgents. The situation in Iraq grew calmer, and newly elected President Obama let the COIN strategy be used in Afghanistan, as well. But when it met with failure, Obama placed his bets on shadow warfare: drone attacks against suspected terrorists and militants in Afghanistan, Pakistan and Yemen; deploying elite combat units; and waging cyber warfare against Iran's nuclear facilities.

9. The war shaped America's stance toward the Arab Spring

One of the most important lessons that Obama derived from the war in Iraq was: just don't get caught up in a second dumb war. This led the United States to hold back during the tumult dubbed the Arab Spring. In the case of Libya, for example, America only supported the rebels for a short time with aerial attacks and allowed the Europeans to lead the West's intervention in the war. Obama's advisers described the policy as "leading from behind." The hawks from the Bush administration were stunned. In a SPIEGEL interview in September 2011, former Vice President Dick Cheney criticized Obama's policy, saying that to "leave it up to others… (was) not necessarily a good way to do business." When it comes to the ongoing civil war in Syria, Obama is facing growing pressure to allow insurgents to at least be provided with direct military assistance. But there are great misgivings about whether getting involved in Syria could eventually become a second Iraq. "Indeed, Syria is Iraq's twin," New York Times columnist Thomas Friedman warned in July 2012, "a multisectarian, minority-ruled dictatorship that was held together by an iron fist under Baathist ideology."

10. The effects of the war pervade the country

Young men and women with amputated limbs are not a rare sight on American streets. The war is everywhere. Everyone knows a veteran, and many lost relatives or friends in Iraq. People put oval bumper-sticker decals on their cars that say "IRQ" (for Iraq) with "I SERVED" in smaller letters below. This is usually a sign of defiant pride given that veterans of the Iraq War are often pitied for having served in a war fought for the wrong reasons, just like their fathers were after Vietnam. Many veterans are having trouble finding jobs, and the suicide rate is high. The nation is unsettled and tired of war. Many Democrats and Republicans alike don't want to hear about military missions abroad. Instead, there is widespread support for "nation-building at home." 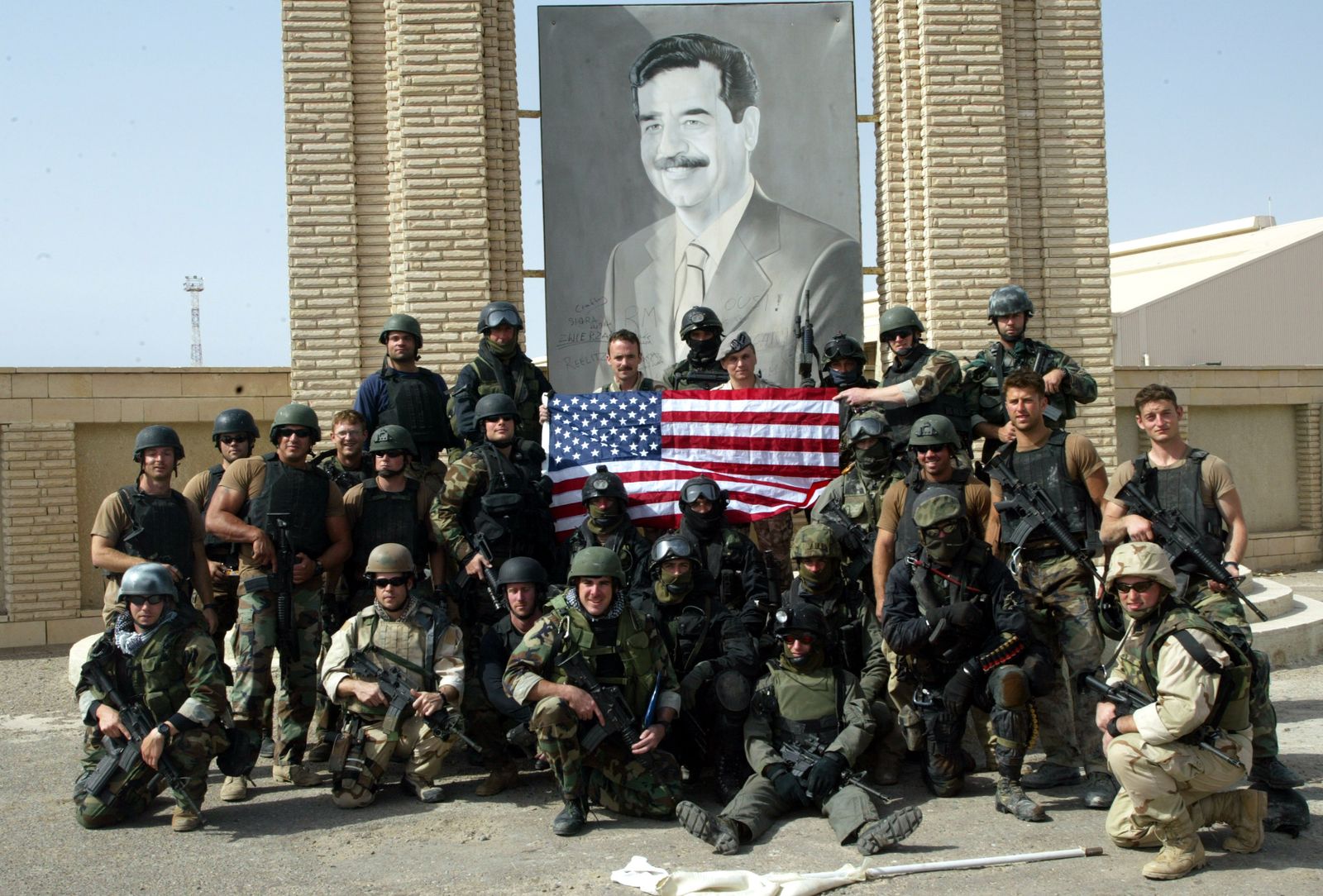 Polish special forces and US Navy Seals pose for pictures under a portrait of Iraqi President Saddam Hussein in the port of Umm-Qasr in southern Iraq in March 23, 2003.