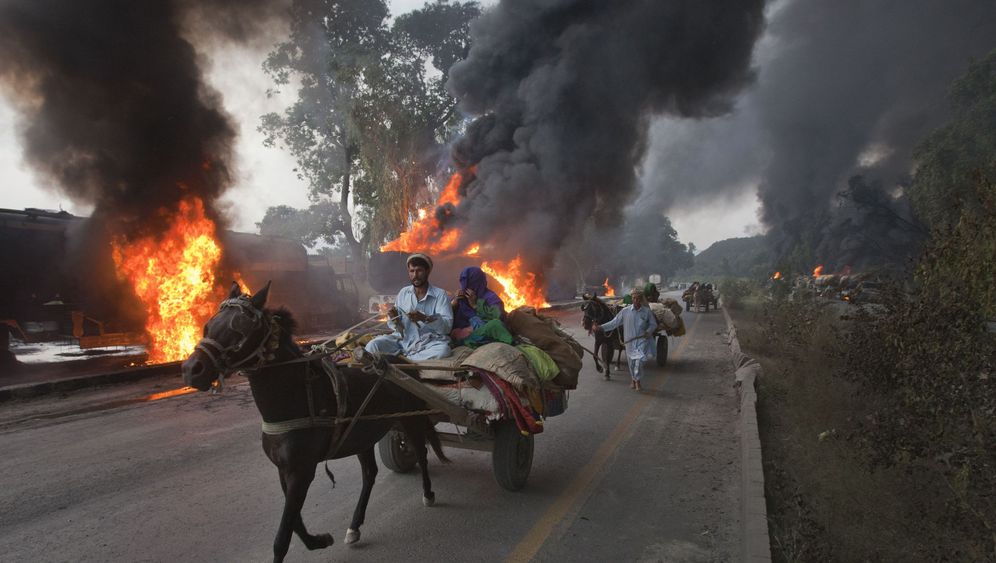 Photo Gallery: A Decade of War in Afghanistan

It was 10 years ago that the United States, together with its NATO allies, marched into Afghanistan to put an end to Taliban rule and begin the hunt for al-Qaida chief Osama bin Laden. A decade later, the terrorist leader is dead. But, says Harald Kujat, former general inspector of the German military, the mission has been a failure.

"The mission fulfilled the political aim of showing solidarity with the United States," Kujat told the German daily Mitteldeutsche Zeitung. "But if you measure progress against the goal of stabilizing a country and a region, then the mission has failed."

Kujat said that it was ignored for too long that "the opponent was fighting a military battle and we needed to do the same." In reference to claims from German political leaders, among others, he said "the argument that it was a stabilization mission was maintained for too long." The result, he said, is that soldiers were not given what they needed in order to effectively fight the enemy.

Kujat is hardly the first to criticize the Afghanistan war. But his words carry weight in Germany. He was a leading planner of the German mission to Afghanistan and served as general inspector of the German military -- the Bundeswehr's highest-ranking soldier -- from 2000 to 2002. Part of his job included advising both the German government and the Defense Ministry on military matters.

The former Bundeswehr leader also took aim at Germany's plan to complete withdrawal of all of its 5,000 combat troops from Afghanistan by 2014, a timeline that was reiterated on Friday by Germany's special representative for Afghanistan, Michael Steiner.

"If we withdraw from Afghanistan in 2014," said Kujat, "then the Taliban will take over power again within just a few months."

Steiner declined to name a date for the beginning of Germany's withdrawal from Afghanistan, but the government of Chancellor Angela Merkel has said it aims at beginning the pullout by the end of 2011, conditions permitting. Steiner said that a plan would be presented by the end of the year.

The withdrawal of NATO forces from Afghanistan was a major topic at a meeting of NATO defense ministers in Brussels on Thursday. NATO chief Anders Fogh Rasmussen of Denmark said that, even after 2014, the alliance would focus heavily on training the Afghan military.

Kujat isn't the only heavyweight critic of the Afghanistan mission to have spoken out in recent days. Speaking in Washington at an event organized by the think tank Council on Foreign Relations, Stanley McChrystal, who led the Afghanistan troop increase ordered by President Barack Obama in 2009, said that the US had a "frighteningly simplistic" view of Afghanistan when the war began. He also said that the US and NATO were only "50 percent of the way" toward achieving the goals they had set for themselves.

"We didn't know enough and we still don't know enough," McChrystal said. "Most of us, me included, had a very superficial understanding of the situation and history, and we had a frighteningly simplistic view of recent history, the last 50 years."

Obama on Thursday, increased pressure on neighboring Pakistan, saying that the Islamabad regime's connections with "unsavory characters" had put the country's relationship with the US at risk. Washington has long been urging Pakistan to cease supporting Islamist militant attacks inside Afghanistan, an effort which has been redoubled in the wake of the US killing of Osama bin Laden in Pakistan this spring.

Pakistan fired back on Friday. Salim Saifullah, chairman of the Foreign Affairs Committee in Pakistan's Senate, told Reuters that "this is not helping either the US, Afghanistan or Pakistan. There will be pressure on the (Pakistani) government to get out of this war (on Islamist militancy)."

26 Bilder Photo Gallery: A Decade of War in Afghanistan