Disaster relief aid has slowly begun arriving on Thursday in Port-au-Prince, the earthquake-devastated capital of Haiti. Numerous countries are currently dispatching humanitarian relief goods, search-and-rescue teams and supplies to the Caribbean nation. The first military aircraft are now arriving at the airport in Port-au-Prince, after it was closed much of Wednesday. And American military aircraft are conducting aerial searches to find possible survivors and also assess the scope of the catastrophe.

It is still too early to determine the devastation wrought by Tuesday's 7.0 magnitude earthquake, but the Red Cross estimates that a total of 3 million people have been affected. Thousands are believed to have been buried in rubble in the devastated capital alone. 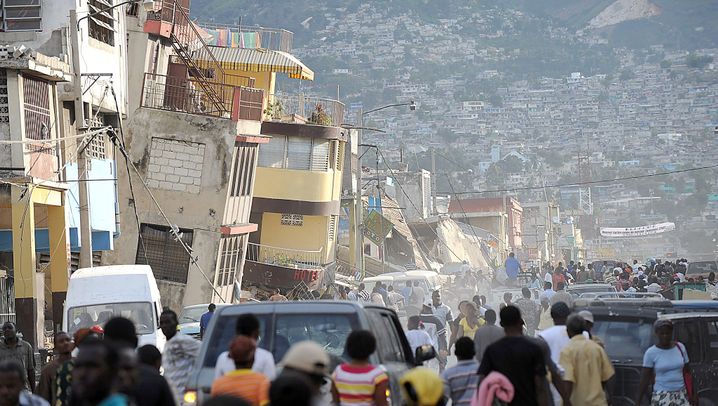 Photo Gallery: Despair Among the Rubble

There are still no official figures for the death toll. The Haitian ambassador to the Organization of American States, Duly Brutus, said he hoped there wouldn't be more than 30,000 dead. But Haitian President Réné Préval, who is coordinating international relief efforts at the Port-au-Prince airport, told CNN he had heard that between 30,000 and 50,000 had perished, but that it was still too early to provide any official figures. Earlier, Haitian Prime Minister Jean-Max Bellerive had warned of up to 100,000 deaths.

On Wednesday, one day after the quake, tens of thousands of newly homeless people wandered the streets of the capital. Survivors used their bare hands as they tried to rescue people trapped in the rubble. The streets are lined with the dead, many of whom have been covered in white sheets.

Many injured are gathering in the parking lot of the Villa Creole Hotel in Port-au-Prince, where countless people lay in tents with injuries ranging from cuts and lacerations to broken bones. Many have not yet been provided with care because there aren't enough doctors to provide treatment. The state of health care in Haiti is disastrous, and many hospitals were destroyed in Tuesday's earthquake.

"I can't take it any more," 28-year-old Alex Georges told the Associated Press, after waiting more than a day for treatment. "My back hurts too much." The dead body of another man around the same age lay just a few feet away from him. At the time of the quake, Georges had been meeting with other students at a school in the Morne Hercule neighborhood. The roof collapsed and at least 11 of his classmates were killed instantly.

On Thursday, rescue workers struggled to prioritize their goals amidst the magnitude of the devastation. "The immediate need is to rescue people trapped in the rubble," said Sophie Perez, the Haiti director of the US-based humanitarian organization CARE. "Then to get people food and water. Everything is urgent."

In Germany, Chancellor Angela Merkel pledged immediate relief on Wednesday. "Germany will support the people of Haiti where it can," Merkel said. The chancellor said she had been shocked by the scale of damage and assured Haitians they had the solidarity of the German government. 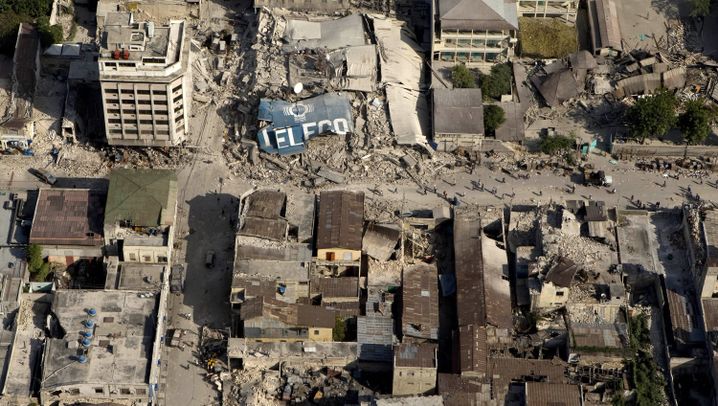 Germany has already pledged €1.5 million ($2.18 million) in immediate relief. The first tranche of that aid will come in the form of €500,000 in food aid provided by Germany's Development Ministry.

The European Union has also said it will provide €3 million in aid. European Union President Herman Van Rompuy, who was in Berlin for a meeting with Merkel on Wednesday, said he wanted to express "utmost solidarity with the people of Haiti" and that "the EU stands ready to offer assistance in any possible way."

French President Nicolas Sarkozy, meanwhile, deployed gendarmes and rescue workers to the earthquake zone on Wednesday. He said the teams would "participate in rescue operations of the local population and localize and help, if the need arises, our missing compatriots." Haiti is a francophone country and is home to an estimated 1,400 French citizens.

Meanwhile, US Secretary of State Hillary Clinton called the earthquake a disaster of "unknown magnitude" and compared it to the devastating Christmas 2004 tsunami in southeast Asia. Clinton cancelled a foreign trip to Asia so she could return to Washington and coordinate US relief efforts. Earlier, President Barack Obama pledged immediate US aid.

"With just a few hundred miles of ocean between us and a long history that binds us together, Haitians are neighbors of the Americas and here at home," Obama said. He called the earthquake an "especially cruel and incomprehensible tragedy."

Numerous countries, including the US, France and several South American countries have sent search and rescue teams and relief supplies to Haiti. The United Nations also said it had mobilized 30 international aid teams.

The US aircraft carrier USS Carl Vinson is also en route to Haiti to deliver helicopters for the search and rescue effort. It also provides an additional runway where transports of relief supplies can land. The US military said the airport at Port-au-Prince was already at overcapacity. The ship is also carrying 100 police, firemen and doctors from the French Antilles. In addition, France has dispatched a plane carrying more than 60 rescue workers as well as emergency doctors and disaster relief workers.

UN Secretary General Ban Ki-moon said he was impressed by the efforts of the international community. He said the first priority would be to rescue survivors. "In any emergency like this, the early hours and days are critical," Ban said. He added that he planned to visit the quake-ravaged area with former US president and UN special envoy to Haiti Bill Clinton.

According to Ban, at least 16 UN workers were killed during the earthquake but he was unable to confirm reports that the death toll included the head of the UN mission in Haiti. Ten Brazilian peacekeepers, three from Jordan and a Haitian staff member are among those he confirmed had died. In total 56 UN employees were injured in the disaster and 150 are still missing.

In Port-au-Prince, hundreds of survivors were fleeing the general panic, heading out of the city balancing suitcases and their belongings on their heads. Police and soldiers from the UN peacekeeping troops cleared the rubble, directed the traffic and security. But they were unable to prevent the looting of the many damaged shops.

Meanwhile, there were fears of more plundering in the city. "At present, people are only thirsty, but when they start to starve we will have an apocalypse here," German journalist Anne Rose Schön said in an interview over Skype.

During her journey to Port-au-Prince, she said she had witnessed a rising aggression among the city's inhabitants. "Half of this city has been devastated," said Schön, who has lived in Haiti for more than a decade. She warned of an increase in the risk of disease. Fearful of aftershocks, locals had brought their tables, chairs and mattresses out onto the street, she said.

The earthquake hit the island at 4:53 p.m. local time on Tuesday, and the epicenter was just 16 kilometers (10 miles) from the capital Port-au-Prince. Haiti is one of the poorest countries on the earth and has repeatedly fallen victim to natural disasters in recent years.