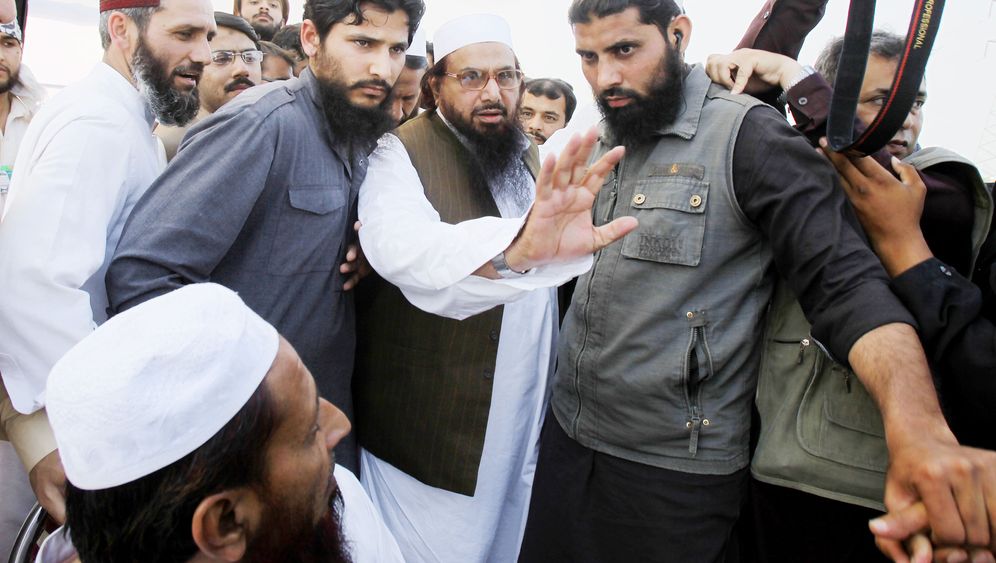 Sheikh Rashid Ahmed leans back in his desk chair as he makes a continuous stream of phone calls in his dimly lit office. The TV set is switched on, yet muted and in front of him is a revolver in its holster. He reaches for it, smiles and then lets it sit there. He has carried a weapon since hired killers shot at him from a motorcycle two years ago.

Ahmed, 61, is a veteran of Pakistani politics. He served in several cabinet posts under Pervez Musharraf, Pakistan's president from 2001 to 2008, most recently as the Federal Minister for Railways. When Musharraf was forced to resign four years ago, Ahmed went down with him. After that, he became religious and founded his own party, the "Awami Muslim League Pakistan," and formally declared jihad on America.

For weeks, Ahmed has been going around the country with a traveling circus of militant, religious men, whipping up the masses into a frenzy against the United States. Together, the men stand around the microphone, their index fingers raised, as each of them says that it is Allah's will that the superpower will lose the war in Afghanistan, and that Pakistan too must now cast off its yoke. They preach hate.

The traveling circus consists of the leaders of 44 religious groups who joined forces about half a year ago to form the "Pakistan Defence Council." They include orthodox mullahs and jihadists, Muslim sect leaders and members of Islamic revival movements. Ahmed is among the more moderate forces, unlike Hafiz Saeed, who is considered to be the mastermind behind the deadly attack on two hotels and a train station in Mumbai in November 2008, in which 166 people died.

The US government, which believes that Saeed is one of the world's most dangerous terrorists, recently announced a bounty of $10 million (€7.7 million) for his capture. This appeared to amuse Saeed, who promptly called a press conference in Rawalpindi, where he made several remarks about his excellent connections to the Pakistan security services and joked about the bounty: "I am here, and I am visible. America should give that reward money to me. I will be in Lahore tomorrow. America can contact me whenever it wants to." No Pakistani prosecutor has any intention of ordering the arrest of Saeed. In his homeland he is a hero, not a villain.

Pakistan is a wild country, thrown into turmoil by the war in Afghanistan. Militant religious leaders have assumed cultural hegemony. They become frenzied over the arrogance of the US superpower, its drone attacks in the border regions and the killing of Osama bin Laden a year ago. Support for such leaders extends into the urban middle class.

Pakistan still hasn't forgiven the Americans for the invasion by Navy Seals on May 2, 2011, which resulted in the killing of Osama bin Laden. And the images from the White House, where US President Barack Obama monitored the operation through a video feed, are unforgotten. Washington had not given the Pakistani government or military any advance notice, so as not to jeopardize the mission. The US humiliated its ally by showing its deep mistrust of Pakistan.

The operation, known as "Neptune's Spear," created a rupture in relations between the United States and Pakistan that refuses to mend.

Normally the US armed forces and the Pakistani army at least pretend to be working together, with diplomats and senior military officials of both countries travelling back and forth on a regular basis. But for months now, there has been a lack of communication between General James Mattis, head of the United States Central Command and in charge of the war in Afghanistan, and Ashfaq Parvez Kayani, the chief of staff of the Pakistani army. The Pakistani parliament, meanwhile, has established a committee that has devoted a great deal of time to discussing new parameters for its relationship with the superpower.

The alienation between the two countries also affects the war in Afghanistan. Pakistan has refused to allow its territory to be used to resupply NATO troops in Afghanistan since last November, when NATO helicopters accidentally fired on two Pakistani border posts, killing 24 soldiers. Since then, NATO has been forced to use a route through Central Asia, an extremely costly detour.

The conflict reveals a practiced double strategy. Although Pakistan made a big fuss about suspending transit through its territory, it would actually like to reopen the supply routes, because they are so lucrative. Pakistan is now demanding a fee of $1,500 (€1,150) for each container of food, fuel or military equipment that arrives in the port city of Karachi and is then transported by truck to Kabul or Kandahar. The United States accepts the massive price hike in return for an exemption on tolls. Until now, the Americans were forced to pay an additional $1,500 in bribes for each container on the mountainous route. The money went to the Taliban and corrupt Pakistani customs officials. But because these bribes are customary and no one believes that the situation will change, NATO's only choice is to either accept the new price until its 2014 withdrawal or continue to use the Central Asian supply routes.

"The Ally From Hell"

The relationship between Pakistan and the United States was contaminated by malicious interests, pursued by both parties, from the start. Causes for mutual suspicion has been plentiful and they have only increased over the years. US Secretary of State Hillary Clinton has just repeated her admonishment of the Pakistan army to finally go after the Haqqani network.

In NATO's assessment, the Pashtun clan of the Haqqanis, based in northwest Pakistan, poses a serious threat to the troops in Afghanistan. More than 40 people died in seven simultaneous attacks in Kabul's diplomatic district in mid-April. Last week, shortly after Obama had completed his unannounced visit to Afghanistan, 11 people were killed in a suicide bombing. Soon afterwards, there were three bombings in northwest Pakistan, which killed 25 people, including several tribal elders who had spoken out against the Taliban.

From the perspective of the Pakistani army and the country's main intelligence agency, the ISI, there are fewer reasons than ever to take action against terrorist groups. The West plans to withdraw from Afghanistan by the end of 2014, at which point Pakistan hopes to exert its influence on developments in the neighboring country. To do so, it maintains allies at all levels, including the Haqqani clan and the Taliban. The United States, for its part, also wants to retain its influence in the region after 2014, and Pakistan remains a suitable base for its operations. Besides, unstable Pakistan is a nuclear power, and one of the West's biggest nightmares is that terrorists could gain access to its nuclear weapons.

In December, an article in the respected US magazine The Atlantic created a furor in both the United States and Pakistan. The piece, titled "The Ally from Hell," begins as follows: "Pakistan lies. It is home to both radical jihadists and a large and growing nuclear arsenal. With a friend like this, who needs enemies?"

The two authors describe in detail how great the military's fear is that it could be deprived of its nuclear weapons. But, they note, the Pakistani generals' fears are not directed at al-Qaida, as one might assume, but the United States. According to The Atlantic, Pakistan's security apparatus saw the attack on Bin Laden as an indication "that the US has developed the technical means to stage simultaneous raids on Pakistan's nuclear facilities."

The security measures Pakistan uses to protect its arsenal are also noted. Warheads or components of the nuclear weapons sometimes have to be updated and, to do so, are brought to the appropriate facilities. Sometimes the transports are done by helicopter, but sometimes "in civilian-style vehicles without noticeable defenses, in the regular flow of traffic," write the Atlantic authors.

Nuclear warheads being transported in delivery vans in the midst of the chaos of large Pakistani cities -- it's a singular idea, born of a paranoid view of America

Pakistan is a nuclear power, but it's also a poor country that does little to alleviate poverty and illiteracy. About half of its 190 million people cannot read or write. As such, the fact that Pakistan is a democracy, at least according to its constitution, isn't terribly meaningful. In reality, feudalism, especially in rural areas, forms the basis of society, and old families like the Bhutto clan still control the country, as they always have.

There were renewed rumors of a coup a few months ago, the kind of rumors that often pop up when a government is at odds with the military. But there was no coup this time. The army hesitated because it had lost some of its halo when, as its critics say, it allowed itself to be controlled by the United States. The prevailing anti-Americanism also weakens the army, which, until recently, was still seen as the only reliable institution in the country.

President Asif Ali Zardari has been given a reprieve. He is an accidental president, the widower of Benazir Bhutto, the two time prime minister, who twice was deposed for corruption and, in December 2007, was assassinated just as she was about to run a third time.

Zardari is one of the most hated politicians in the country. His nickname from earlier days is "Mr. Ten Percent," because he was said to have routinely skimmed off 10 percent of government contracts when he served as investment minister in his wife's cabinet. He was convicted of corruption in 1999 and spent five years in prison. After that, he followed his wife into exile and returned with her in 2007, after then President Musharraf had issued an amnesty.

These are the conditions in Pakistan that sometimes prompt Pakistanis, in cynical desperation, to call their country a "wasted land."

There is a great deal of infighting within the political system, with only the judges on the Supreme Court garnering some respect at the moment. For decades, the justices were nothing more than the vicarious agents of the military, giving every coup a constitutional blessing. But they appear to be removing themselves from this dependent relationship. Recently, in fact, they have even begun investigating "Mr. Ten Percent," President Zardari, and his old sins.

At first, the justices declared the 2007 amnesty null and void, because it was based on a presidential decree and not on a law. Then they tried to review the cases that had come under the amnesty, cases involving millions of dollars that Zardari had allegedly laundered and deposited into Swiss bank accounts.

The case was complicated and straightforward at the same time. It was complicated because the judges wanted to force the Pakistani government to write a letter to Swiss authorities asking that the case be reopened. Paradoxically, Zardari could not write the request, because as president he enjoys immunity and was therefore out of range. The judges turned to Prime Minister Yousuf Raza Gilani instead, asking him to submit a request to Switzerland to reopen the case. But Gilani refused, turning a legal dispute into a showdown.

The case was straightforward, because contempt of court is a punishable offence. If Gilani had been convicted, he would have lost his position and new elections would have been necessary. The Supreme Court also threatened several times to impose a penalty, but it ultimately shied away from the decision and reached an absurd verdict: The judges symbolically sentenced the defendant Gilani to a prison term lasting only seconds, because it was deemed served "at the moment in which the judges rise."

This was the upshot of a symbolic democratic conflict in which, in the Pakistani view, all parties came out ahead: the judges who had charged the prime minister, and Gilani, who can remain in office.

The status quo was preserved and, as a result, the peculiar Zardari/Gilani team could quite possibly endure until 2013, when it will have completed a full term in office. That would be a novelty in the history of Pakistan, where civilian governments are either swept away in coups or forced to resign because of corruption.