Even without the ongoing tensions between the West and Iran, the case would have all the ingredients for a political thriller. But given the current political climate, the arrest of two German reporters, alleged by Iran to have entered the country without the requisite journalist visas, looks set to cause a diplomatic row between Berlin and Tehran.

Official statements from Iran say that the two journalists were arrested on Sunday evening in the office of Houtan Kian, the lawyer of Sakineh Mohammadi Ashtiani, who has been condemned to death by stoning. The journalists were interested in interviewing the lawyer in the presence of Ashtiani's son. The authorities have accused the journalists of fraudulently entering the country as tourists without the proper working visas. For Iran, the case is politically sensitive because the planned stoning of Ashtiani for alleged adultery has sparked international protests.

The identity of the two reporters remains unclear. Sources in Berlin and Tehran have speculated that they could be employees of the German mass-circulation newspaper Bild am Sonntag, but the newspaper's publisher, Springer Verlag, has so far declined to confirm the suspicion. A spokesman said they had not received any information about a possible arrest of its employees in Iran and the publisher also declined to comment as to whether the detained Germans could be freelance journalists working for the newspaper. The German Foreign Ministry also did not comment on the identities of the two Germans or their employer.

The first reports of the arrest came from Iranian activist Mina Ahadi, the founder of the Germany-based International Committee against Stoning, which is campaigning to save Ashtiani. Ahadi claims she had arranged the contact between the German reporters and the Iranian lawyer. When the two reporters met Ashtiani's lawyer on Sunday afternoon, Ahadi acted as an interpreter for the interview by phone from Germany.

Ahadi claims to have heard the reporters being arrested while on the phone. She told SPIEGEL ONLINE that one of the journalists suddenly ended the interview after three or four questions. She said that the man, sounding shocked, had shortly before called out: "What's going on?" Afterwards she heard other voices in the room, she said. Ahadi said she was convinced that the two journalists and the lawyer had been arrested by the police. There has been no sign of Ashtiani's son or the lawyer since the telephone call.

A task force in the German Foreign Ministry is working intensively on the case. Initially they tried to work behind the scenes to make contact with the Iranian authorities. Now that the Iranians have made the allegations public via a government-controlled news agency, however, the diplomats fear prolonged political negotiations. On Monday the task force tried to get access to the two journalists, who are being detained in the northern Iranian city of Tabriz, where Ashtiani is also being held.

Politically, the arrest could hardly come at a worse time. Relations between German and the regime in Tehran are icy because of the ongoing dispute over Iran's nuclear program. Iranian President Mahmoud Ahmadinejad also recently gave an inflammatory speech before the UN General Assembly. Given such a political climate, even optimists in the Foreign Ministry believe that arranging the release of two German nationals, whether or not they violated Iranian law, will be a sensitive challenge.

The German Journalists' Association (DJV) called for the immediate release of the two reporters. DJV head Michael Konken said that Tehran's claim that the journalists were not accredited was merely a "pretext to suppress critical reporting on human rights violations in Iran."

Sakineh Mohammadi Ashtiani was sentenced to death by stoning in 2006 for alleged adultery and the murder of her husband. After international protests, the sentence was temporarily suspended in July. Iran is likely to view the German journalists' attempt to interview Ashtiani's lawyer about the case as a provocation. The two detainees could now be used as pawns in a bid to obtain political concessions from Germany.

Iran has increasingly isolated itself from the outside world since the so-called Green Rebellion following the disputed presidential elections in June 2009. Foreign media receive virtually no press visas for the country and on Monday, the day after the arrest of the two Germans, Tehran told the El Pais correspondent Angeles Espinosa to leave the country by Oct. 24. The expulsion was clearly linked to an interview that the journalist conducted in July with the son of the late reform politician Grand Ayatollah Hossein Ali Montazeri.

In the recent past, the regime has played macabre negotiating games with the home countries of its foreign prisoners. Last year, the French language teacher Clotilde Reiss spent more than six weeks in a Tehran prison. The Iranian government accused her of endangering national security, gathering information and inciting rioters. She was only allowed to leave in May 2010. It is assumed that Paris had to make concessions to Tehran in return. 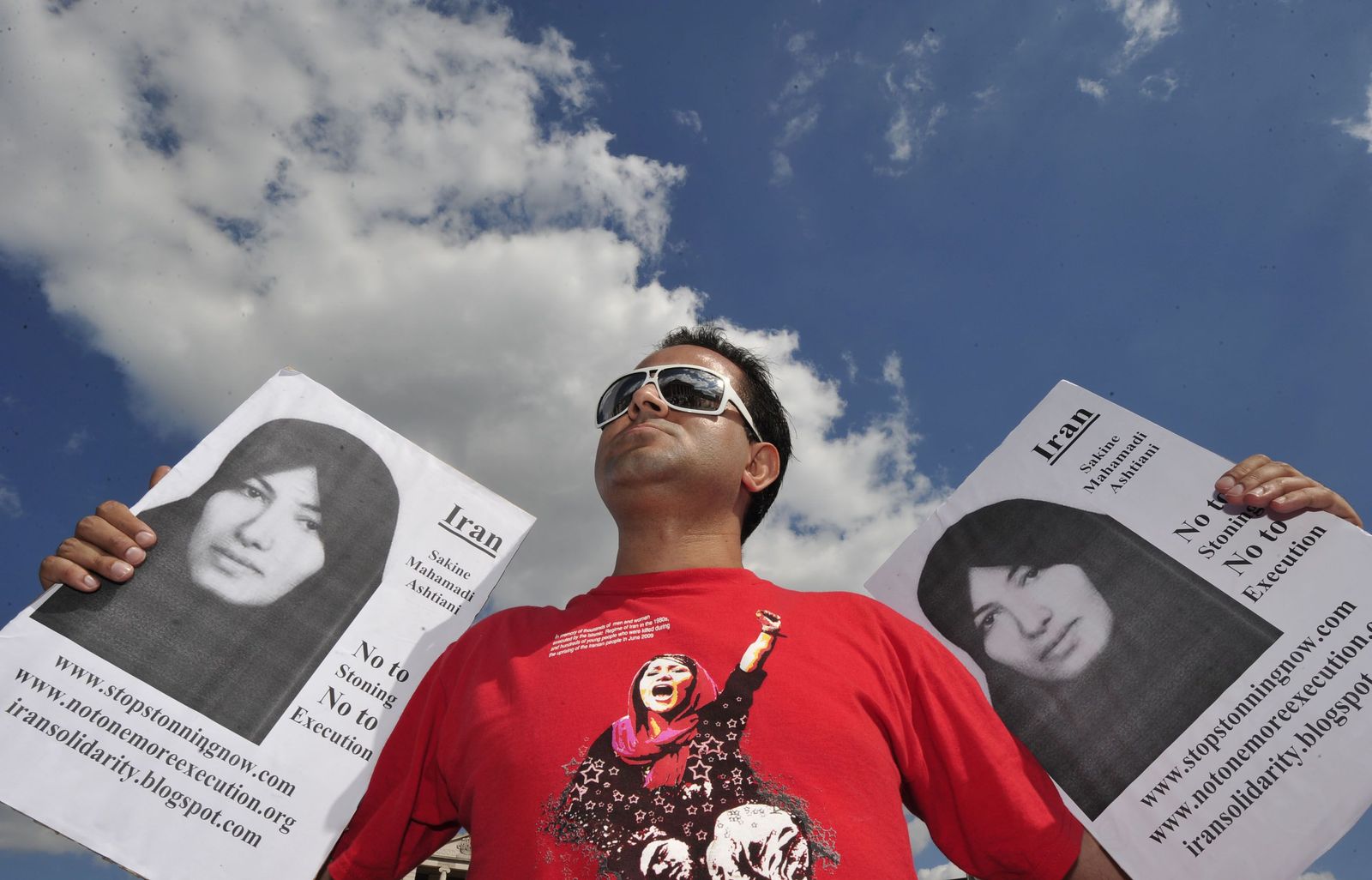 A demonstration in London by the International Committee Against Stoning, which is demanding the release of Sakineh Mohammadi Ashtiani: Two German journalists who tried to interview Ashtiani's lawyer have been arrested in Iran.