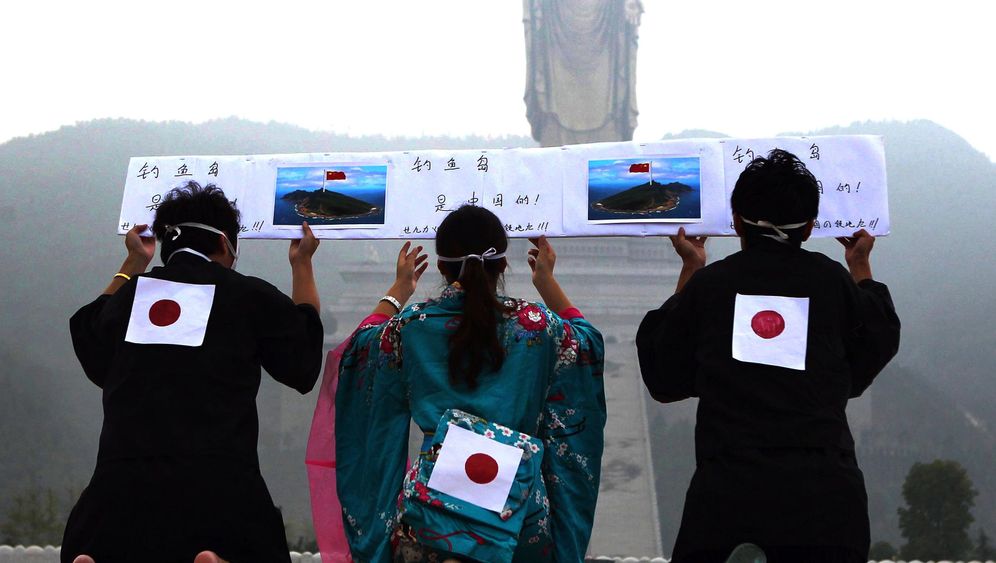 Hiroyuki Kurihara runs his hand over the nautical chart hanging on the wall of the office of his Tokyo-based architectural firm. Finally, he points to five tiny dots in the blue of the East China Sea, far to the southwest of Japan: the rocky and uninhabited Senkaku Islands. The islands are home to waterfalls and goats, but not much else.

Until recently, most of the Senkakus belonged to the Kuriharas. "For over 40 years, we have safeguarded these islands for our nation," says Kurihara, "but now we've grown old." The week before last, the family sold three of the Senkakus to the Japanese government for the equivalent of €20 million ($26 million). Kurihara, 65, now thinks this was a mistake. He would have rather caused even more of an uproar.

As it is, though, this unusual real estate deal has triggered the most heated dispute in decades with Japan's large neighbor: In China, rioting demonstrators damaged Japanese businesses and set fire to factories, and Beijing has dispatched patrol boats to the area -- where the Japanese coast guard has been ordered to keep the Chinese in check. "Could Asia really go to war over these?" asked the British weekly magazine The Economist in a headline posted over a photograph of the tiny outcrops of land.

China lays claim to the islands, which it refers to as the Diaoyu Islands, and feels provoked by their sale to the Japanese government. Oddly enough, though, this is precisely the conflict that Japan sought to avoid. "Our government missed many opportunities to defend our sovereignty," says Kurihara bitterly.

Eight years ago, Kurihara transferred ownership of two Senkakus that belonged to him to his brother Kunioki, 70. In conservative Japanese families, he says, it's always the oldest son who manages the estate. It is thus the older brother, Kunioki, a wealthy property owner, who unilaterally made the recent decision to sell.

For years, however, Hiroyuki Kurihara has acted as a kind of spokesman for the older brother, who has no cell phone, never shows himself in public, and is never pictured in the Japanese media because he is apparently afraid of attacks. If it had been up to the younger Hiroyuki, the clan would have sold the islands to the Japanese capital Tokyo, which is currently under the administration of Governor Shintaro Ishihara, 79.

Ishihara, a right-wing populist and nationalist, is urging a hard line with China. The Chinese see him as an antagonistic figure -- whereas back home in Japan he is widely seen as a man who stands up for the nation's interests. Ishihara could have built a refrigerated warehouse for storing tuna and a massive pier on the island, says Kurihara. He would have fixed Japan's claims in concrete. "Ishihara has a strategy to defend the islands against Chinese incursions," says Kurihara.

China, for its part, backs up its claim with documents dating back to the Ming Dynasty (1368 to 1644). Furthermore, the islands lie on the continental shelf off China's coast.

'A Bulwark Off the Continent'

Kurihara watched televised reports showing how some 1,000 Chinese fishing boats set course for the Senkaku Islands. At times it seemed as if the patrol boats of both naval powers were about to collide with each other.

Kurihara thinks it's terrific. "You can clearly see that Japan lies like a bulwark off the continent," he says, pointing to a nautical chart. It's mainly thanks to its chain of islands, which extends almost to Taiwan, he says. "Japan is the greatest obstacle to Pacific expansion -- and that must annoy the Chinese immensely," says Kurihara. Now, they have unmasked the aggressors, he contends.

Kurihara fought for decades to get attention for his cause. "We Japanese lack an awareness that we need to protect our own territory," he argues.

From 1972 onward, the Kuriharas gradually acquired four of the islands from another clan, the Koga family, which had no children and had earlier operated a fish processing plant in the archipelago. In 1972, the US returned administration of the Okinawa island group, which had been occupied during World War II, to Tokyo -- and since then the Senkakus have been under Japanese control.

But then mainland China and Taiwan voiced their claims: In the late 1960s, experts from the United Nations discovered the potential for oil deposits in the waters surrounding the islands. Nonetheless, the government in Tokyo placed its confidence in a pledge made during a 1978 visit to Japan by Deng Xiaoping, the Chinese reformer who led China toward a market economy. Deng indicated that China would do nothing to challenge Japan's claims to the islands for the time being. At the time, the Chinese leader was eagerly wooing the Japanese for their industrial expertise -- and for production plants, such as the ones that have recently been torched during the protests.

But meanwhile the Chinese have surpassed the Japanese as an industrialized nation, and the balance of power has reversed itself. Furthermore, China now has an enormous hunger for natural resources.

"Over the long term, our family could not have protected the Senkaku Islands from China," says Kurihara. Therefore, he says, the family was negotiating with Japanese nationalist Ishihara -- until the government intervened. It put pressure on the older brother, Kunioki, and purchased the islands -- with one exception.

The island of Kubajima belongs to one of the female members of the Kurihara family. She has found a good tenant there who can ensure the security of this pile of rock: The Japanese armed forces have leased Kubajima as a training area for bombing practice.