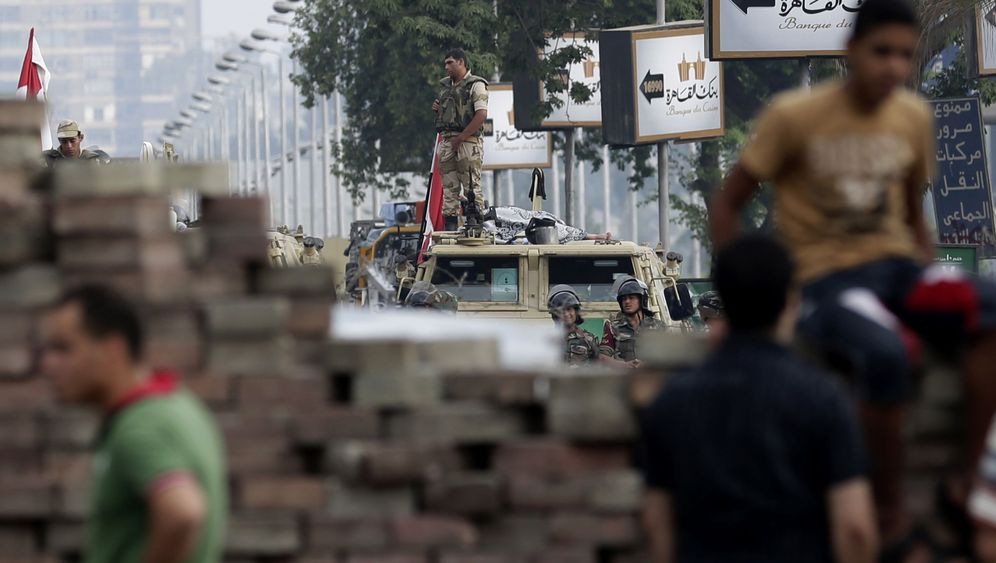 It is a good 15-minute drive from Tahrir Square in the heart of Cairo to Raba'a al-Adaweya Square in the Nasr City quarter of the capital. Yet worlds divide the Egyptians who have been gathering at the two sites in recent days. And every day, it seems, the division becomes wider.

In Tahrir Square on Tuesday, people were selling posters of the country's new strongman, General Abdel-Fattah el-Sissi, who toppled then-President Mohammed Morsi last week. Sissi is backed by a colorful mixture of people opposed to Morsi's Islamist rule. On Raba'a al-Adaweya Square, however, demonstrators held images of Morsi aloft. They are the followers of the Islamist Muslim Brotherhood movement -- and they have vowed not to vacate their tent city until Morsi is back in office.

The conflict has become so entrenched that the country appears ungovernable, and an intense struggle for Egypt's very identity has emerged. One side believes that the Muslim Brotherhood wants to force its beliefs onto the country. The Islamists accuse the liberals of seeking to do the same.

The country's interim government is trying to bridge the gap. On Tuesday, the office of interim President Adly Mansour announced that it would soon be announcing an initiative it is calling "One Nation." "The presidency invites everyone to participate in an overarching initiative whereby a humanitarian basis for coexistence shall be set," read the statement. Also on Tuesday, the prime minister's office announced it would offer cabinet posts to Freedom and Justice, the Muslim Brotherhood party.

On Wednesday, however, it looked as though that would not be enough. The Muslim Brotherhood has rejected any participation in the interim cabinet, according to the news agency AFP -- a rebuff that seems to underline the Islamists' earlier call for an uprising against the interim government. The move is unsurprising, considering it was only Monday that over 50 Muslim Brotherhood members were killed while protesting outside of an army barracks. Even as it remains unclear exactly what happened, the Islamists say the shooting was unprovoked, hardly a position that lends itself to rapid reconciliation.

The military is trying to move forward quickly nonetheless. On Monday evening, the army issued a constitutional decree establishing the rules for a rapid transition back to democracy and an ambitious timeline was laid out. On Tuesday, agreement was finally reached on an interim prime minister after three previous candidates had been blocked by the Salafist party Nour.

Yet even as agreement was ultimately reached, the difficult negotiations over the interim prime minister show just how difficult it will be for the military to make rapid progress. For one, the various groups that supported the overthrow of Morsi have very little in common. Not even a week after Morsi's ouster, the alliance's fragility is becoming apparent. The youth movement Tamarod, for example, has criticized the constitutional decree as has the main liberal group, National Salvation Front. Ahmed el-Tayeb, a powerful Sunni Sheikh who is head of the Al-Azhar Mosque, has threatened to abandon the alliance altogether. It is a threat that the Salafists from the Nour party have made several times as well.

Meanwhile, hatred appears to be gaining the upper hand. On Tuesday, there were very few demonstrators in Tahrir Square. But the headlines on Egypt's biggest newspapers for sale there showed how the recent events were being interpreted. "The Army Kills More Than 50 Terrorists," read one representative headline about the Monday massacre. The state-run paper al-Akhbar added the absurd accusation that "there were 200 heavily armed Americans, Iraqis and Syrians among the terrorists."

'Worse than the Unbelievers'

At the same time, on Raba'a al-Adaweya Square, several thousands were gathered. One speaker said that the military was using violence to prevent additional people from making their way to the square -- which was little more than a bold-faced lie. An Islamist newspaper accused the liberal politician Mohamed ElBaradei of being a "US agent who wants to destroy Egyptian democracy." Morsi's critics are described as being "worse than the unbelievers within the family of the Prophet Muhammad."

The atmosphere has become so heated that people have begun demanding that perfect strangers show their colors. Clothes are interpreted to determine who belongs to which camp. Bearded men are presumed to be followers of Morsi, whereas women in T-shirts are immediately branded as being pro-military. Scuffles have become more common.

It is currently unclear how this divide might ultimately be bridged. "We will not stop demonstrating until Morsi is president once again," says 53-year-old Salafist Mamdou Ismail. He is a member of the Nour party, which officially threw its support behind the military. Its grassroots members apparently see things differently.

There is some hope that Ramadan, the month of fasting which begins on Wednesday, will help calm the situation. But Ismail and his friends say that, even if they cannot eat or drink during daylight hours, they plan to continue demonstrating.