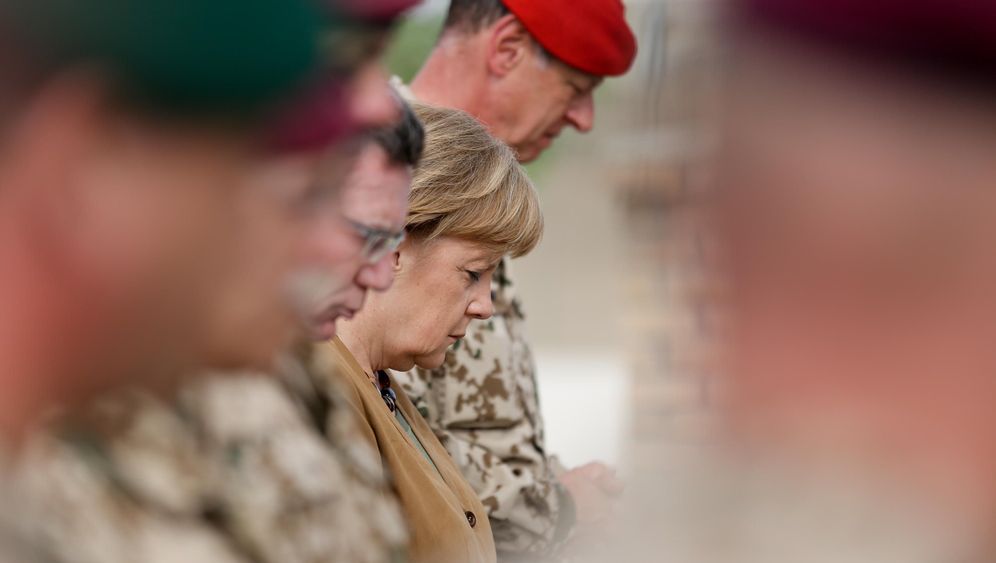 It's a hot morning at the German military's Kunduz field camp when Chancellor Angela Merkel has a brief close encounter with war. She looks up at a soldier, a man who towers 2 meters (6.5 feet) tall, with tattoos up to his neck. The rifle hanging in front of his chest comes to the height of her face. Surrounding the chancellor and the soldier are his unit's light-wheeled tanks, which ran into an improvised explosive device two weeks ago. The troops are lined up at attention.

Against this backdrop, the chancellor wants to know what war feels like. She has just a brief moment. "How many attacks have there been?" she asks. "Seven," the soldier replies. Merkel nods, reflects for a second and says: "Not nice!" Fortunately, the soldier assures her, nothing has ever happened aside from material damage. "Well, I'm sure it gave you quite a scare!" Merkel says. Then the chancellor hurries on.

Quite a scare -- that is occasionally Berlin's view of the war. But the reality in Afghanistan became clear the weekend before last when one German and seven American ISAF soldiers were killed during attacks and clashes with the enemy.

The death of this Bundeswehr soldier called to mind a war that hardly receives any attention anymore in Germany. After all, the withdrawal has already begun and the German military has weathered the worst of the fighting, or at least that's what many had hoped after nearly two years without a combat casualty.

But the latest German soldier killed in action is emblematic of the security situation on the ground, which began deteriorating once again during the first few months of this year. After 11 years in Afghanistan, the Bundeswehr faces the most difficult year of its military mission. While the Taliban gains ground amid a rising number of attacks and clashes, it has to master the massive logistical challenge of a withdrawal.

The German military will leave behind a country still far from peace after decades of war. It seems that the decline in clashes over the past year was not a sign of the sustainable success of the West, but merely a tactical break by the insurgents.

Roughly one-and-a-half years before the planned end of the international military effort, its success appears more doubtful than ever. German politicians deflect attention from the imminent failure of this mission -- which was designed to bring security, stability and democracy to Afghanistan -- with vague demands for "reforms" and progress in the "political process."

Among the Bundeswehr soldiers in the two large camps in Kunduz and Mazar-e-Sharif the mood was gloomy during the week following the deadly clash. "Death seemed so far away," says a friend of the dead soldier, "now it has come one step closer."

Depressing figures recently released by the Afghanistan NGO Safety Office in Kabul confirm this impression. According to the organization, the number of attacks by Afghan insurgents during the first quarter of 2013 rose by 47 percent in comparison to the previous year, with most now directed against Afghan security forces.

The statistics paint a grim picture for the Bundeswehr's area of operations in the north of the country. In many regions the number of clashes has increased, and the situation is even worse in southern and eastern Afghanistan.

There has even been increased fighting in parts of Badakhshan Province in the northeastern part of the country, which has been relatively calm until recently. At the end of last year, the Bundeswehr held an official ceremony in which it handed over control of its camp in Faizabad to the Afghan security forces, a move that was seen as a test of how the situation might develop after the troop withdrawal. Now, ISAF officials are doing their best not to recognize any trend in the dramatic increase in the number of incidents. No one is willing to admit the possibility of failure in the northeast.

The withdrawal has begun and heavily-loaded military transport aircraft leave the country and head west nearly every day. The first camps have already been closed, and this year the Bundeswehr intends to close its fortress at OP North and the Kunduz field camp.

In northern Afghanistan the government is expressing serious concerns about the withdrawal of the Germans, which is proceeding much more rapidly than many had imagined. Atta Mohammed Noor, the powerful governor of the northern Afghan region of Balkh, is urging a long-term German mission in Mazar-e-Sharif. "Without the help of the Germans, the army will quickly fall apart again," he warns. "Which is why a further stationing of troops is urgently required here."

While the situation is better than it was during the crisis year of 2011, says German State Secretary of Defense Christian Schmidt, who visited Bundeswehr troops last week, he admits that "the Afghans are still unable to achieve security on their own." In other words, the security situation is so precarious that Afghanistan is in danger of sinking into chaos and civil war after the withdrawal of ISAF troops.

It still remains unclear whether, and how, the international mission will continue following the withdrawal at the end of 2014. In April, Germany pressed ahead with an offer to station 600 to 800 soldiers to train Afghan military forces starting in 2015. The main objective of this early commitment was to ensure that the issue remained out of the election campaign as Germans go to the polls in September 2013.

Nevertheless, German Defense Minister Thomas de Maizière pointed out in April that this offer depends on a number of factors. As planned, NATO must launch a training mission throughout the country, and not merely in Kabul, he said. The UN Security Council must also grant this military force a mandate, he added. But above all, the minister demanded that Kabul be more obliging, saying that he expected a formal invitation from the Afghan government: "We want to be welcome," de Maizière said.

That invitation has not been extended, though. In view of the shaky security situation, it is particularly important to maintain good relations with the Afghan hosts during the withdrawal phase. Only by working in close cooperation with Kabul can NATO member states plan an effective military involvement for the period following the withdrawal at the end of 2014. However, Chancellor Merkel appears to have little interest in this.

Her brief visit last Friday illustrated once again how strained relations remain between Berlin and Kabul after 11 years of the German mission in Afghanistan. There is so little trust that German protocol officers didn't even bother to announce the chancellor's arrival to their counterparts in Kabul.

There would have been an opportunity for a phone call with Afghan President Hamid Karzai shortly before Merkel disembarked from her government aircraft in Mazar-e-Sharif at 6 a.m. -- but no telephone conversation took place. This has annoyed officials in Kabul, who see Merkel's visit as an "open affront," says one of Karzai's advisers. "In Germany it would be a scandal if we landed in Berlin without advance notice, but one can do this with us Afghans," he quipped. The mood is so frosty that Kabul is even considering making an official complaint to Berlin.

Merkel's view of Karzai is no less critical. During their last meeting, Karzai spoke at length about reforming his corrupt government, including revamping the justice system and bolstering women's rights. But virtually none of this has happened. Instead, Berlin has closely observed how Karzai attempts to control the electoral commission and forges unholy alliances with dubious warlords to secure his power base beyond the elections slated for April 2014.

All Eyes on Washington

It's not merely a lack of trust between Berlin and Kabul that is making post-withdrawal planning difficult, though. Germany's NATO partners have also been hesitant to commit to a further mission. France and Canada have stayed out completely, and among the remaining major allies it is primarily the British who are reluctant to shoulder a portion of the burden. Nevertheless, the Mongolians, Swedes and Belgians have indicated that they are willing to remain in northern Afghanistan under German leadership.

The greatest problem is Washington. The United States, which should actually assume a leading role, is mired in internal squabbling over Afghanistan. Due to his hesitation, US President Barack Obama is already the subject of ridicule in defense circles, where they say that the beginning of his second term in office is "more reminiscent of Jimmy Carter than Bill Clinton." Staff members at ISAF headquarters in Kabul are also getting nervous.

Negotiations over stationing a follow-up mission have stalled. While President Karzai indicated last week that he is prepared to tolerate American military bases even after 2014, the mid-June summit planned by leaders of NATO member countries to determine their further engagement in the country will now no longer take place.

If Obama decides against committing some 8,000 US troops, all plans for the period following the combat mission will be off, and the Germans will have little choice but to withdraw their trainers from northern Afghanistan -- leaving the Afghans to face an uncertain future on their own.