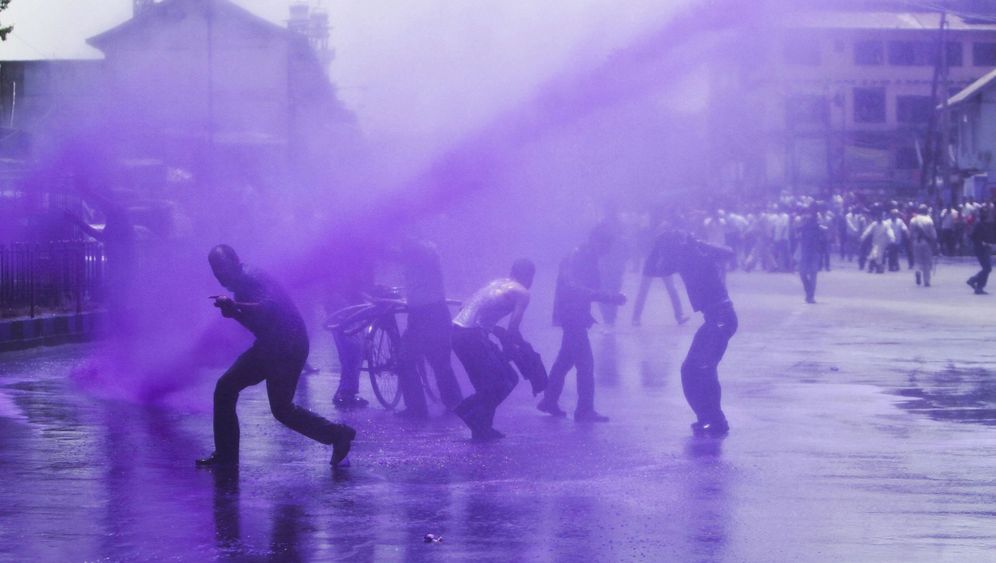 The mourning father points to a short video flickering across the screen of his mobile phone. It shows his son Irfan in front of a computer, swaying enthusiastically to the beat of the music he has mixed for a school party. The 17-year-old was shot to death a day later, right in front of his parents' house, during an operation by Indian soldiers.

Irfan's father is too despondent to talk about what happened on that night in late June in Sumbal. The district is northwest of Srinagar, the capital of Jammu and Kashmir, India's only state with a majority Muslim population.

A cousin says that Irfan had run out of the house at about 3 a.m., suspecting that there were cattle thieves outside. That was where he was shot, says the cousin.

"The soldiers wanted to take along his body," says the cousin. He suspects that the military patrol planned to photograph Irfan with a gun in his hand -- as proof that he was a military separatist in the service of hostile Pakistan or a rebel with one of the Islamist groups fighting against Indian control over Kashmir.

Violence has been on the rise again in the troubled province since the summer. On Aug. 6, Muslim extremists shot and killed five Indian soldiers. According to Indian sources, the Pakistani military helped the attackers. Since then, there have been border skirmishes between the Pakistanis and the Indians almost every day.

In the state's interior, the Indian army has been brutal in its treatment of all those it considers to be separatists. A special law guarantees immunity to Indian soldiers if they kill innocent civilians in the process.

Until the end of British colonial rule, in the summer of 1947, Maharaja Hari Singh, a Hindu, ruled Jammu and Kashmir, with its majority Muslim population. When the subcontinent was partitioned, Singh hesitated before deciding whether to join India or Pakistan. He would probably have preferred independence, which many Kashmiris desire today. But an attack from Pakistan, instigated by Pashtun tribal warriors, forced him to make a different decision. The maharaja requested military support from New Delhi and joined in October 1947 the Union of India, as the predecessor to modern-day India was known.

Since then, India and Pakistan have waged three wars over Kashmir. India controls the larger part of the disputed region, within its state of Jammu and Kashmir, while Pakistan controls the smaller northern part of the region -- and both countries claim the entire region for themselves. The "line of control," a 740-kilometer (460-mile) former cease-fire line, divides Kashmir across mountaintops and glaciers.

Kashmir is like a fortress, and not just along its borders. According to unofficial figures, the Indians alone have stationed half a million soldiers in Jammu and Kashmir. The troops are positioned behind sandbags and patrol the streets, constantly on the lookout for attacks by separatists, many of whom are trained in Pakistani terrorist training camps.

To suppress protests, the government often imposes curfews and disconnects the Internet. During unrest in mid-July, four local residents were shot to death and 10 times as many were injured. Before the riots, Indian soldiers had allegedly torn pages out of a Koran at a religious school.

Mohammad Umar Farooq lives and works in a walled complex in Srinagar, one of the state's two administrative capitals. Bodyguards search anyone wishing to visit the spiritual leader of Muslims in Kashmir. Farooq also fears attacks by nationalist Hindus because the Muslim organization he runs, Hurriyat, is seeking independence for Kashmir.

Farooq is wearing an orange robe-like kaftan as he sits in front of an Apple computer. Next to him is a wooden miniature of the largest mosque in Srinagar. When he wanted to go there recently for Friday prayers, a military truck blocked his gate. Officers forbade him from leaving his house but refused to explain why. "I'm practically under house arrest," says the cleric.

Farooq faults the government in faraway New Delhi for viewing Kashmir exclusively from a security perspective. Even peaceful protests are suppressed, he says, and there is growing hatred of the Indians, especially among young, educated Kashmiris. "In cultural terms," says Farooq, "we are not part of South Asia. In the long run, Kashmir cannot be separated from Muslim-influenced Central Asia."

In fact, Kashmir is like a foreign body in India. Muezzins call from mosques, and many women wear burqas. India pays a high price for keeping the unruly state in check. About 70,000 people have already died in the conflict, and thousands are considered missing. Resistance fighters have been abducted, killed and buried in mass graves.

Still, the deep wounds caused by decades of violence cannot be measured in numbers. Arshad Hussain works in a psychiatric hospital in Srinagar. On this morning, he has an ambulance come and pick him up. Most of the streets near the hospital are blocked off because young people throwing stones are battling the police. A large number of patients are waiting for Hussain in the courtyard of the psychiatric hospital. Many suffer from depression. Some are at acute risk for suicide, including a civil servant with a long, gray beard and deep-set eyes.

There is no word in the Kashmiri language for suicide. The region's deeply religious population long had one of the lowest suicide rates in all of India. But after two decades of violence, says Hussain, the number of suicides is now on the rise. Many people take poison, he explains, while manic depressives tend to slit their throats.

Hussain calls a woman in her late 40s into his office. She has had heart palpitations and stomach pain for years. She has gone from one doctor to the next, but none has been able to find a medical reason for her symptoms. According to the psychiatrist, the woman's symptoms are classic for Kashmir. Her 13-year-old son got caught in a crossfire 15 years ago and died. She hasn't gotten over his death and continues to make food for him, which she then feeds to the birds.

The country desperately needs a political solution, says the doctor. That would include talks involving India and Pakistan as well as between the government in New Delhi and the separatists.

Hopes for Change and Reconciliation

Muslim politician Omar Abdullah, the chief minister of Jammu and Kashmir, meets with us in the state's guesthouse in New Delhi. This is where politicians from around the state stay when they come to the capital for talks with the central government.

A photo of his grandfather, a former chief minister of the Himalayan state, hangs in the lobby. Abdullah's father later succeeded his grandfather in office. All three came into office through elections, and yet none of them exercised any real power because New Delhi has and continues to make all the important decisions.

"I'm afraid that the historic window for talks between the central government and the separatists in Kashmir has just become dramatically narrower," says the 43-year-old, sounding tired and disappointed. India will elect a new parliament next year, which is why even the coalition aligned with Abdullah in Delhi can't afford to send any conciliatory signals to Kashmiri separatists at the moment.

Abdullah would like to mediate between the conflicting parties in the Kashmir dispute, but neither side takes him very seriously. All he can do is express his hopes, such as the one that New Delhi will finally limit the army's immunity in Kashmir.

The latest change of government in Pakistan could pave the way to an easing of tensions. The new prime minister, Nawaz Sharif, initiated the so-called Lahore peace process in 1999. After 14 years of setbacks, Sharif and his Indian counterpart, Manmohan Singh, met in New York, where they agreed to develop a plan to prevent further violations of the 2003 ceasefire.

Abdullah hopes that India and Pakistan will eventually transform the Line of Control into a national border, and a peaceful one that could be crossed by residents of both parts of Kashmir. The entire subcontinent must finally overcome the legacy of partition, says Abdullah, noting that Indians and Pakistanis should follow the example of the Europeans, who can travel freely between countries.

In May, Abdullah used Twitter to congratulate Pakistani Prime Minister Sharif on his election victory. He also called upon Sharif to restart the peace process.