The mood was a festive one on Wednesday in Washington D.C. Just like every year before Thanksgiving, US President George W. Bush "pardoned" a turkey -- this year's version was named Pumpkin. President-elect Barack Obama and his wife Michelle, for their part, joined TV legend Barbara Walters for a chat. The atmosphere was relaxed -- they talked, for example, about how the Obama daughters would be in charge of making their own beds when they moved into the White House in January.

But then the images from the terror attacks in Mumbai began flickering across the television screen. And suddenly, the pre-holiday calm in Washington and Chicago, where Obama's transition team is headquartered, came to an abrupt end.

Bush and Obama quickly issued statements. "President Bush offers his condolences to the Indian people and the families of the innocent civilians killed and injured in the attacks in Mumbai," the White House statement said. "The US government continues to monitor the situationand stands by ready to assist and support the Indian government." Terror experts from the State Department and the Defense Department quickly began analyzing the situation.

The Obama statement was in a similar vein. "These coordinated attacks on innocent civilians demonstrate the grave and urgent threat of terrorism," Obama spokesman Brooke Anderson said. "The United States must continue to strengthen our partnerships with India and nations around the world to root out and destroy terrorist networks." 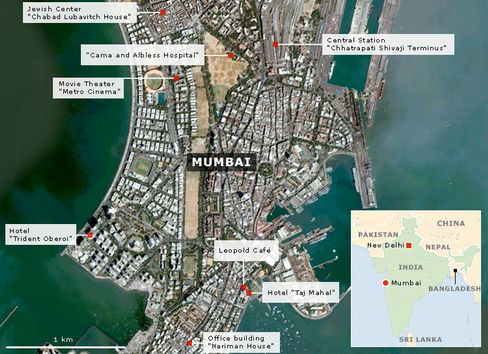 Where the attacks took place.

Obama also quickly got on the phone with US Secretary of State Condoleezza Rice, who briefed him on the situation. But the exact circumstances of the series of attacks, which killed over 100 people and injured some 250, were unclear on Wednesday evening in Washington. A previously unknown group calling itself Deccan Mujahideen sent out e-mails to media organizations claiming responsibility for the attack. But there are a number of groups in India that could be behind the Deccan Mujahideen, including groups from neighboring Pakistan.

This much is certain: If it is indeed confirmed that Americans and Britons were targeted and that the attacks were inspired by al-Qaida's radical ideology, then the difficult transition phase in Washington has become even more complicated. "If the terror threat spreads from Pakistan and Afghanistan to the important American ally India, that's an enormous problem for the United States," ex-presidential advisor David Gergan said on CNN Wednesday night.

The crisis could be Obama's first big foreign policy test. The world is going to dissect his response. The president-elect has already been in the spotlight for days because of the worsening financial crisis. Given the extent of the economic catastrophe, the January 20th inauguration date seems too far in the future for an ever-growing number of Americans. For three straight days, Obama has held press conferences in order to introduce economics experts who will advise him and stimulus programs that should help the country out of the crisis. His message was clear: "Help is on the way."

Now, Obama may also be forced into taking responsibility for foreign policy earlier than expected. Indeed, the attacks could be seen as a personal warning directed against him. During the campaign, his vice-presidential nominee Joe Biden attracted attention for announcing that, in the first six months of his presidency, Obama would be tested on the international stage. 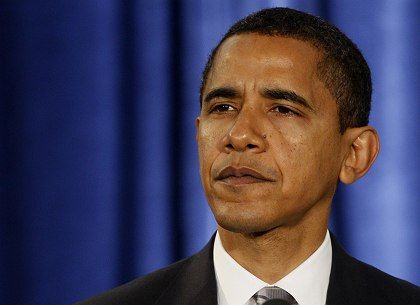 The list of challenges keeps getting longer for US President-elect Barack Obama.

Al-Qaida may have a special interest in providing such a test. Obama's middle name "Hussein" and his popularity in Arab countries could pose a serious threat to the organization. Contrary to Bush, Obama is difficult to portray as an American infidel. Al-Qaida lieutenant Ayman al-Zawahiri in his remarks on the American election was forced to provide more creative criticism, calling Obama a "house negro." Terrorists may in fact be trying to force Obama into reacting harshly, so that he appears to the world as war-minded as Bush.

But the events have not caught the team unprepared. The US security forces have repeatedly outlined the possibility of a terrorist attack during the transitional phase. American Secretary for Homeland Security Michael Chertoff has long warned of the dangers of handing over power in times of war -- and gave a reminder that former presidents like Bill Clinton and George W. Bush had to react to terror attacks early on.

For that reason, ever since the election, Obama has received the same secret service briefings as the president. The FBI has also started unusually early with their security checks on potential white house employees -- in contrast to Bush's first time in office. Back then, many of his closest security advisors had not completed their checks by the Sept. 11, 2001 terrorist attacks in New York and Washington.

And the Democratic president-elect has also moved with caution when selecting his cabinet. He asked Secretary of Defense Robert Gates -- a Republican with close links to the Bush family -- to stay in office for at least another year. That provoked grumbling among the left wing of the Democrats. But Obama found it more important to avoid an abrupt change in the global security policy given the two US wars in Iraq and Afghanistan and the ongoing terror threat. The Wednesday attacks have validated his approach.

Still, despite the early chorus of praise, Obama remains a novice in foreign affairs -- and he will need advice from old hands. "There are a lot of things that keep me up at night," Obama said in the interview with Barbara Walters: the financial crisis, the US auto industry's decline and the energy crisis. Now he knows all too well that foreign crises too can rob a president of his sleep.