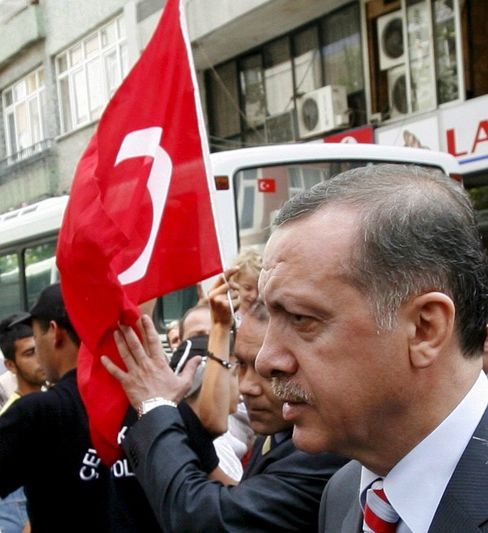 Regardless who was responsible for the bombings on Sunday evening in Istanbul, the attackers could hardly have chosen a more sensitive time to hit the country. Just a few hours after the massacre in the district of Güngören, which killed 17 people and left more than 150 injured, the Constitutional Court in Ankara convened to deliberate the case seeking to ban the ruling Justice and Development Party (AKP). A verdict is expected by the end of the week. It is possible that by next week the country could be without any political leadership at all.

Meanwhile another historic case was launched on Friday by a different prosecutor -- for the first time former generals were indicted on charges of plotting a putsch to overthrow the government. They are accused of having formed a shadowy organization called Ergenekon along with ultranationalist commandos, far-right lawyers, well-known business leaders and journalists with radical Kemalist sympathies.

The case will be a litmus test for Turkish democracy, prominent journalist Cengiz Candar exulted in a column published on Monday but penned before the bombing attacks. And a ruling in the Ergenekom Trial would represent a quantum leap for Turkish democracy, Candar argues. It would be the first ever condemnation of the "deep state" -- this shadowy world of playmakers from the ultranationalist camp who feel empowered to operate without democratic legitimacy in order to, as they see it, save the republic -- and it could also put a curb on the country's entire tradition of political putsches.

But is it possible for a trial like that to even take place in a country where, in just a few days time, there may be a political vacuum rather than political leadership? And will state institutions stay intact if the highest court takes on the government and the president at a time when the population is being thrown into a state of panic because of terrorist attacks?

Prime Minister Recep Tayyip Erdogan rushed on Monday morning from Ankara to the scene of the attack in Güngören -- one of the many anonymous suburbs of characterless concrete apartment blocks that house the majority of the 12 million people living in the Istanbul metropolitan area. He wanted to ease the people. "You can never use terror to achieve political goals," he said, adding: "The police will quickly clear up the attack."

Despite the Kurdistan Worker Party's (PKK) denials, the majority of Turks are convinced the Kurdish separatist party is behind the attack. Erdogan didn't explicitly name the PKK, but he clearly hinted at the group on Monday. "When you give it a name you are making propaganda," he said.

Erdogan's appearance in Güngören was accompanied by alternative applause for him and anti-PKK chants. The evidence may be thin, but blaming the PKK -- a known quantity -- conveniently slots the attack into a recognizable pattern of conflict, reducing the horror it has evoked.

But whereas the war against the PKK has been an everyday and clear-cut reality for 20 years in Turkey, the behind-the-scenes battle between the Islamists and the ultranationalists mystifies most people, and is the source of a myriad conspiracy theories. By issuing its immediate denial of responsibility from Brussels, the PKK also took advantage of the opportunity to blame Turkey's "dark forces" for the attack -- a term used in the country to describe the death squads of the "deep state."

With everything apparently turned on its head in Turkey right now, anything seems possible. Prime Minister Erdogan, for example, gave a major interview over the weekend to Hürriyet -- the leading media outlet of the secularists -- in which he claimed there was a threat that the underlying pillars of the state could collapse. The mere fact that Erdogan is speaking directly to Hürriyet editor-in-chief Ertugrul Özkök represents a symbolic reaching out across the strict lines that divide political camps. In the interview, he spoke candidly of his own mistakes and the need to heal the wounds of a divided society.

Perhaps the Constitutional Court justices will take note of his message. The court is split. The president of the court and the judge named as rapporteur are on balance opposed to banning the AKP. And regardless who was responsible, it may be that Sunday's bomb attacks, designed to further destabilize the country, will have the opposite effect. Even though a majority of the judges are opposed to the AKP, they will not want to see the country descend into chaos.

A few days ago, Turkish newspaper columnist Mehmed Ali Birand wrote: "Give the AKP a shot across the bows and give Erdogan a second chance." That may turn out to be exactly the effect of Sunday's bomb attack.