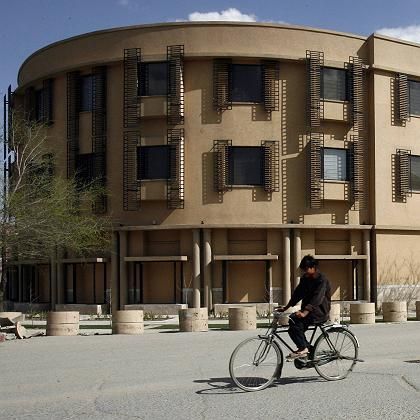 The five-star Serena hotel in Kabul was notified that it was a potential target of terrorist attacks from two German Islamists.

Two German Islamists may be planning a terrorist attack in Afghanistan, German investigators are warning.

On April 1, the Federal Criminal Police Office (BKA) on April 1 notified leaders of Germany's military, the United Nations and potential targets -- including a five-star hotel in Kabul -- that two men from Germany with known ties to terrorist groups could be planning a bomb attack against Germans in Afghanistan.

The men are identified as Eric B., a 20-year-old German Muslim convert, and Houssain al-M., a 24-year-old Lebanese native who holds a German passport.

Federal investigators connect the men to the Sauerland terror cell, a group of three would-be terrorists arrested in Germany last September. Investigators believe that the cell, comprised of two German converts to Islam and one Turkish national, was plotting a major attack on US military bases in Germany.

The Sauerland group and the two men named by German authorities this week also share connections to the Islamic Jihad Union, a terrorist organization that runs a training camp in northern Pakistan. Investigators believe all five men trained at the camp.

The terrorist group also claims to have trained Cüneyt Ciftci, a German-born Turkish citizen who is believed to have become the first German-born suicide bomber last month when he detonated a truck bomb in front of a government building in Afghanistan's Khost region, killing two US soldiers.

Officials within the BKA told SPIEGEL ONLINE that investigators kept an eye on Eric B. and Houssain al-M.'s movements after they left Germany last fall. The two men's first stop was Cairo, where they visited a radical Islamic cleric with ties to Germany.

At the end of November they proceeded to Dubai, then on to Tehran. Investigators lost track of them in early December, but they are believed to have crossed the border from Iran into Waziristan, a northwestern Pakistani province where the Islamic Jihad Union has several training camps.

Houssain al-M. attempted the same crossing last summer with a member of the Sauerland terror cell. However both men were arrested by Pakistani secret service agents.

A German intelligence official told SPIEGEL ONLINE that the men were detained for days and interrogated by Pakistan's Inter-Services Intelligence agency before being deported to Germany. The official suggested that al-M.'s interrogation could have "heightened his intention to take part in the holy war." Fearing that he would be monitored or apprehended by authorities in Germany, the official explained, al-M. quickly planned his return to Pakistan.

The current whereabouts of Eric B. and Houssain al-M. are unknown, but German authorities hope that their public alert may prompt the men to abandon any planned attacks.

"When they see their pictures everywhere and realize that we and the Afghan authorities are looking for them, maybe they will give up the worst of their plans because it is too dangerous," the official told SPIEGEL ONLINE.