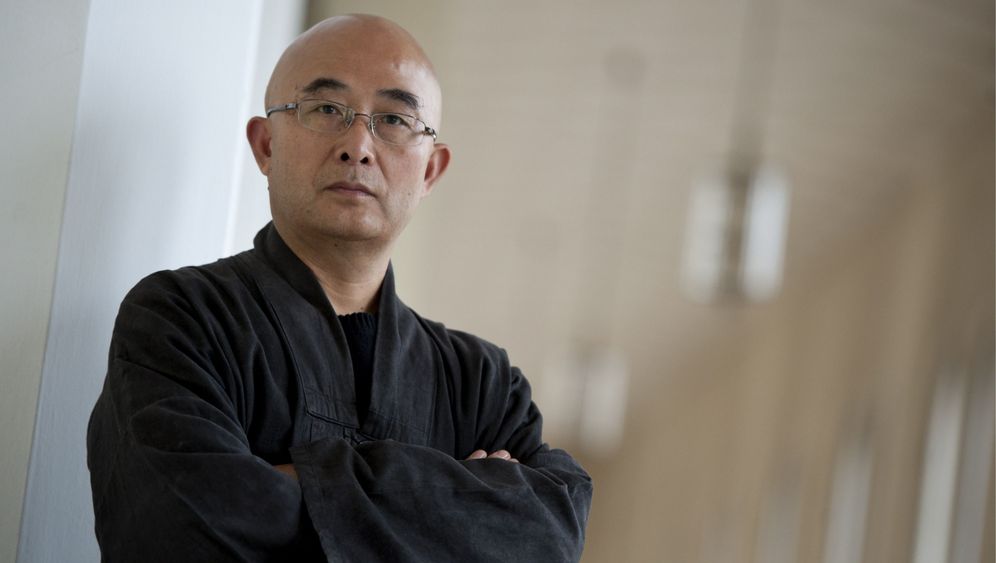 The old man seemed unflappable as he spoke. Sitting in a wheelchair, his wooden cane always close at hand and his thick, silvery gray shock of hair as neatly parted as ever, he talked about China, presenting himself as someone who knew the place well, having been there 12 or 15 times. "I admire what China has accomplished since Mao Zedong's death in 1976," he said.

But he didn't stop there. He continued on to say that, while it's true China isn't a democracy, the country has nonetheless managed to create an economic boom for itself, with the result that "hardly anyone living in China today could say they aren't doing better now than at any other point in their lives." This is "an enormous accomplishment," he added, and Chinese communism has been "successful." Then he raised his index finger, and, stabbing it in the air, said, in a reference to a famous quote by the Prussian king Frederick the Great: "They have the right to find their salvation in their own way."

This 92-year-old man wasn't just chatting by a fireplace somewhere, nor was he just anyone. The man in question was former German Chancellor Helmut Schmidt, celebrated as the grandfather of the nation. And Schmidt said all this as a guest on Germany's most important talk show, sitting across from Günther Jauch, the country's most respected talk-show host. At his side was the man who has set his sights on becoming the next chancellor, Peer Steinbrück. The talk-show host said nothing at all in response to Schmidt's theories, but quickly changed the subject. Steinbrück, for his part, suggested the theories were "in need of some fleshing out," then praised Western-style democratic rule of law in a roundabout way.

Schmidt got away with his statements without criticism, in front of more than 5 million viewers, and with applause from the studio audience.

The former chancellor certainly appeared sprightly on that talk show three weeks ago, and considering the fact that he seems to be constantly out and about and meeting people, perhaps he could -- though it's just a suggestion -- spare a little time for someone who might make an interesting conversation partner: the friendly 53-year-old Chinese man who has written the year's most brutal and shocking book, and insists every word in it is true.

The man is Liao Yiwu and the book lays out his recollections from nearly four years spent in Chinese prisons, following his arrest and conviction for writing a poem called "Massacre" in response to the bloody suppression of the 1989 demonstrations at Beijing's Tiananmen Square. His latest book, published in German as "Für ein Lied und hundert Lieder" ("For a Song and a Hundred Songs"), is an eyewitness report from the epicenter of human rights abuse, a volume that overflows with blood, urine and excrement.

"Admiration" for China? "The right to find their salvation in their own way?" Liao Yiwu was astonished when told about the former chancellor's statements. He asked whether Schmidt really uttered those precise words, then shook his head.

On Thursday of last week, Liao had just arrived in Munich after a book tour in the United States, in order to accept the Geschwister Scholl literary prize for his prison memoir on Nov. 14. He found his way, exhausted and shivering in the cold, to a restaurant in Munich's English Garden for this interview, but when he heard Schmidt's words quoted, he was suddenly wide awake.

Anyone who talks that way is afraid of jeopardizing trade with China, he said, but such people bring "bad thoughts into the world." If trade is more important than human rights and dignity, "then the end of the world has arrived." And no one should deceive themselves about the Communist Party, he said. "It has a golden body and two faces. It shows the Chinese people its fierce face, and the West its pleasant one."

Liao Yiwu described that fierce side in his book. He was forbidden to publish it in China or abroad, but S. Fischer Verlag, a German publishing house, was interested in releasing it this summer. Another of Liao's books, published in English as "The Corpse Walker: Real Life Stories, China from the Bottom Up," had been well received in Germany two years before. In that book, Liao records his conversations with China's poor and disenfranchised, the toilet cleaners and migrant workers, and those persecuted for their political views.

Liao was forced to write multiple versions of his prison memoir. The first version, hand-written and his only copy of the work, was confiscated by the police. So was the second. For the third version, he was able to write on a computer and save back-up copies. After investing so many years in the work, Liao was determined to see it published in Germany. He fled China for Berlin in early July, and the book was released later the same month.

Liao writes in his book that he was a "romantic" before he went to prison, a successful young poet in China during the 1980s, talented, but naïve and apolitical.

The turning point for him came on June 4, 1989, with the massacre at Tiananmen Square. The words poured out of him, and "Massacre" was the result.

Liao's taped recording of the poem circulated among dissidents. In 1990, he was arrested and taken to an interrogation prison. "They exposed my head, then my body. The (prisoners appointed as guards) examined the clothing they'd torn from my body, centimeter by centimeter, then piled it up nearby. Only then did they examine my mouth, my armpits and the soles of my feet. I clutched both my empty fists at my sides, then moved instinctively to pull up the pants that weren't there, when their leader ordered me to stick out my bottom -- and, with the utmost care, inserted a bamboo stick into my anus."

"I hadn't been exposed to the gaze of others this way, without a stitch of clothing on my body, since I was a baby. The exhibition lasted about seven minutes, but it was longer than an entire lifetime … God damn it, I hadn't thought the first blow would already bring me to my knees."

He was kept in a cell near the latrines, and from there taken to his interrogations. The guards beat him with electric batons, one time delivering 100 blows in a single interrogation, another time for 20 minutes without pause. They cuffed his hands behind his back, once for 23 days straight. The handcuffs were often too tight, causing his hands to swell and the metal to dig into his skin.

There was a clear hierarchy among the prisoners, about 20 of them were held in "a bit more than 20 square meters" (215 square feet). The higher-ranking prisoners were waited on by the lower-ranking ones. There were the "pleasure servants," feminine young men with pretty faces who sang and danced for the higher-ranking prisoners, slept naked beside them and performed sexual favors. Then there were the torturers, merciless with their defenseless victims.

A so-called "menu" circulated among the prisoners, offering 45 "dishes," each a description of a different method of torture. "Twice-roasted meat, served on a steel plate: First, the victim's naked back is pricked at random with bamboo needles, causing thousands of punctures. These are strewn with salt, then the entire thing taped up in bandages. Once the blood has clotted, the bandages are torn off."

Liao Yiwu left prison a broken man, and China's enemy. In one poem, he describes his "fatherland" as a "country of criminals" and exclaims, "I want to see you in prison. I want you, too, to see how it feels to have your hands bound at your back." He asks whether the country wants "for your people to love you like a prostitute loves her client."

Writing gives him dignity. He's no longer afraid. And life is about survival.

He feels lost even during the days in Munich leading up to the acceptance of his award, although he has friends here with him. But how can he feel joyful, given his history? How can he, when a friend he has felt closely connected to for 30 years is in prison? Author and Nobel Peace Prize winner Liu Xiaobo, one of the individuals who signed the Charter 08 human rights manifesto, was sentenced in 2009 to 11 years' imprisonment for "inciting subversion of state power." Liao Yiwu thinks of his friend every day. Is he being tortured with electric batons this very minute?

At the restaurant in Munich, Liao orders a fish stew, but leaves half of it uneaten. "It's the potatoes," says the friend sitting next to him. "There were always potatoes in prison. Now he can't force them down."