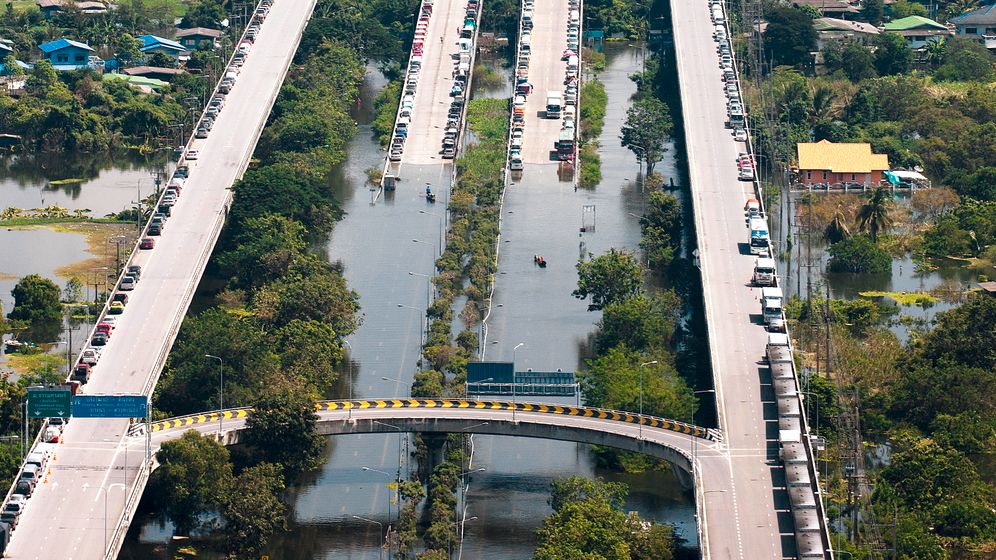 It's past noon on Wednesday when the petite woman reaches Bangkok's Don Muang Airport, where the Thai government is trying to tame the chaos. It has set up the headquarters of its crisis center at the airport, though large parts of it are already underwater. Brown, mucky water swirls around the Thai Airways planes left behind and standing deserted on the runway as if abandoned long ago. The mood is apocalyptic.

Prime Minister Yingluck Shinawatra, the petite woman in a black pantsuit and white blouse, looks remarkably out of place in this hectic environment. With a bashful smile she glides past her aides as they carry heavy sacks of rice and water bottles around, past the foreign diplomats trying to figure out whether their compatriots can also be evacuated, past blue-uniformed US Marines offering their aircraft carrier off the coast as a place of refuge.

Yingluck wants to demonstrate her strength, to show her people that they can count on her. "We're dealing with a national crisis," she repeatedly says. "We're doing our best." At the same time, the 44-year-old woman, who has only ruled Thailand since early July, appears very sad.

It doesn't help that people from the disaster task force on the second floor have just announced that additional areas of Bangkok have vanished under water. The flood is invading the city of 12 million from the north, east and west, and only a handful of main dikes are standing in the way of a complete catastrophe. A map of the city is divided into red and blue areas, indicating dry and flooded, respectively. At the moment the map is more red than blue, but the blue areas are growing, as if nothing can halt the water's advance.

Many of the country's dikes have broken, and water is mercilessly blazing a trail south. Behind it lie the severest monsoon rains in 50 years. Around 350 people have died since mid-July, and one-third of Thailand still stands underwater: factories, rice fields, even the historical ruins in Ayutthaya, the former capital of the Kingdom of Siam.

Bangkok is next in line, and it seems particularly susceptible to this kind of catastrophe. It lies only 2 meters (6.6 feet) above sea level. The mighty Chao Phraya River flows right through its heart; the massive city has experienced unchecked growth for years, and the many forests and grasslands that used to surround the city and serve as natural obstacles are now paved over in concrete. Where there used to be flood plains, there are huge industrial zones.

"During the last major flood in 1995, the amount of precipitation was almost as high as it is now," says Chaiyuth Sukhsri, a expert on water resources engineering from Bangkok's Chulalongkorn University. "But," he adds, "the damage is 100 times greater today because of reckless encroachment into the countryside." Indeed, nature seems to be avenging itself for man's arbitrary behavior.

At Don Muang Airport -- the city's second-largest -- Shinawatra accepts donations from companies. She must put up with the fact that they are using this as an opportunity to promote their products. The prime minister poses for photographs showing her with a bottle of cough syrup, with a can of tuna fish, with some fruit juice. She smiles but looks deeply unhappy.

For a long time she claimed Bangkok was safe and that the government had "the situation under control." But the water sits knee-high in some parts of the city and waist-high in some industrial suburbs. Bangkok's governor has called on people directly affected by the flood to abandon the city if they can.

The opposition, which has close ties to the military, has tried to capitalize on the crisis. It has called for a state of emergency to be declared and for the military -- which happens to be quite skilled at launching coups d'état -- to take control. Yingluck has tried to counter the critics by going into the streets and meeting with victims in person. But when it emerged that she did so wearing Burberry high heels costing more than $200 (€140) a pair, the only reward she reaped for her efforts was more ridicule. And then panic broke out in the city.

Since then, there have been endless lines in front of ticket counters at Bangkok's still-functioning Suvarnabhumi Airport (the main international airport). Indeed, the English-language daily The Nation has described it as a downright "exodus." Vacation resorts such as Hua Hin and Pattaya are almost fully booked, but the number of foreigners arriving has started to dwindle.

Those remaining in Bangkok have stormed supermarkets to stock up on whatever they can find. At first, in many places, water was sold out. Then it was rice. Now they're waiting for fresh supplies from Malaysia and Singapore. In the city's Chinatown area, near the river, vendors sell life vests and inflatable rafts, both imported from Vietnam.

The threat to central Bangkok can been seen in Nava Nakorn. The entire suburb, with its factories and worker settlements, was inundated after a protective barrier was breached. The water is now 2 meters high, and tens of thousands are homeless.

Somchai Omla, a 39-year-old father of two, is one of the affected. For 38 years he has lived just outside Bangkok. In normal times he earned his money driving people to work at factories owned by Toshiba, Nestlé, Western Digital or Casio. But then came the floods that inundated the ground floor of his house.

Somchai just barely managed to bring his family to safety. But there was no time to rescue his valuable possessions, such as his beloved motorcycle, his refrigerator and the carefully tended collection of old ceramics. Most of it is now just worthless junk.

Still, Somchai refused to be defeated by the flood. He borrowed some money from relatives and bought a small wooden boat with an outboard motor for what would be more than €1,000. Since then, he has been ferrying rescue teams and safety officials through the flood zone, including not only police officers and soldiers, but also animal-rescue officials intent on saving stray dogs caught up in the flood waters.

Near plundered supermarkets in Nava Nakorn, you can see the trucks left behind and the abandoned industrial facilities. The flood has wreaked tremendous damage. Roughly one-third of all computer hard drives in the world are manufactured in Thailand, and the flood has caused hard-drive costs to rise quickly in the US and Europe.

Almost 1,000 factories in the country are closed, and flood damage for the industry is already estimated to be $5 billion. The country's central bank has lowered its growth forecasts for 2011 from 4.1 to 2.6 percent. In Bangkok, which accounts for over 40 percent of Thailand's GDP, it will be weeks, if not months, before the worst has been overcome.

Likewise, it's almost impossible to predict the social consequences of the disaster. By Friday evening the flood had taken 370 lives. The government sacrificed places like Nava Nakorn itself in order to safeguard the capital. "Of course many Thais have started tearing open dikes," Somchai Omla says. "They don't want to pay the price for failed settlement policies."

Solidarity and Fears of Looters

At the moment, Somchai is on his way to visit his aunt so he can supply her with water, bread and rice. He steers his boat through the suburb's streets. It's a dangerous trip: The traffic lights are almost completely submerged in water, and from time to time you can see the barbed wire of a factory wall glistening in the water.

At the halfway point he is waved down by Patjaa Tipi. The business owner wants to keep an eye on his paper factory, but the outboard motor on his inflatable raft has run out of fuel. In a testament to the Thais' sense of solidarity in times of crisis, Somchai gives Tipi some gas from his canister.

Somchai's 60-year-old aunt, Tip Chaipapruek, didn't want to abandon Nava Nakorn, where she and her husband run a small hotel for factory workers. Although everything here is underwater, too, the couple have managed to move the furniture up to the second floor. Now they also live on the second floor because they're afraid of looters. When the floods first arrived, Tip explains, a lot was stolen.

The thieves have led 39-year-old Prapas Jimsamarn to patrol Nava Nakorn day and night. The awnings of his boss's four furniture and consumer-electronics stores are partially covered in water. But there are undamaged DVD players and televisions being stored on the upper floors.

"It's mainly Burmese who are conducting the raids here," the guard says. He uses a mattress from one of the furniture stores as a raft. He's even made the unusual vessel halfway comfortable with a plastic chair, two bottles of rice wine and a jerry can. And he doesn't think the drama will be over anytime soon. "The water won't drain away before Christmas," he predicts.