"Fire and Fury" is the title of the new exposé of Donald Trump's first year in the White House. The tome has only been out for a few days, and yet it has already established itself as one of the books of the year. Even we journalists find ourselves describing the book's contents as "indescribable" and "unfathomable." Can the world's most powerful man really be dumb, senile and addicted to television as the book claims? He spends his early evenings watching three televisions in his bedroom? Eating a cheeseburger and tweeting all the while? An entire White House teetering between hysteria and chaos? And yet, it's still the journalist's job to describe the indescribable and fathom the unfathomable.

Our latest cover story explains how "Fire and Fury" came to be and whether, and the extent to which, it approaches the truth. Most importantly, however, it delves into the consequences for an America and a world that have been confronted with a nuclear-armed fool who is likely to remain in office for some time to come, who is neither mentally nor psychologically suited for the job - apparently also not physically, either, given how late he starts the working day and how early he ends it. That, unfortunately, is precisely the point: Humanity as a whole is being set back just because of one single person. The achievements of decades - the fight against a climate disaster, against the nuclear threat, for equality between men and women, between blacks and whites and so on and so on. Where is the world supposed to start again if it manages to survive Donald Trump?

Our cover image is a manifestation of all that exasperation. It was designed by New York artist Edel Rodriguez, who has done most of our past Trump cover images. It illustrates the regression of humanity through Trump. The title: "The Age of Fire and Fury." 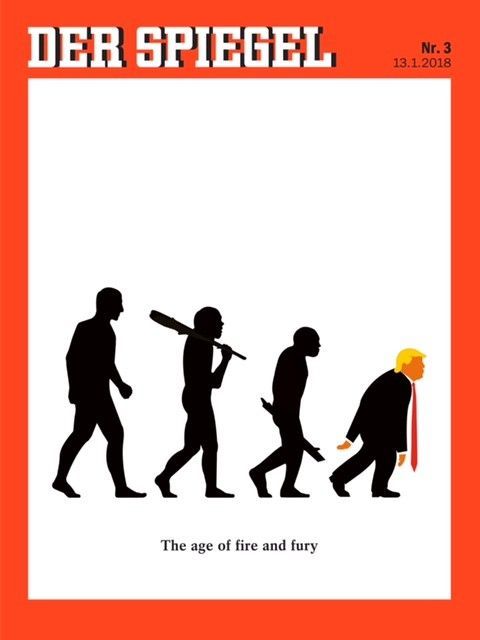