On the surface, it appears to be working. Even before President Hamid Karzai was able to present his plan for reconciliation with the Taliban, the first defector had arrived on the scene. His name is Maulvi Mohammed Shah.

Until last weekend, Maulvi Mohammed Shah was a Talib in Afghanistan's Baghdis province -- more precisely in the district of Javand. It's not far from Herat, the city close to the border with Turkmenistan. Shah commanded 20 fighters, and together with them, he went to the National Reconciliation Commission. He handed over 18 Kalashnikov automatic pistols, a machine gun and a grenade launcher.

Was that the first step towards peace in Afghanistan?

We in the West would love to see it that way. But it would only be the next great act of self-deception. Stretching a conciliatory hand out to the Taliban and offering them the possibility of returning to civilian life is a good and long overdue idea. But it is no panacea. Anyone who has listened in recent days to all the Holbrookes, Browns and Westerwelles -- who have each excitedly sought claim the copyright on the issue of "exit programs" for himself -- won't feel any better. After all, this probably is merely the start of the next big hype.

NATO troops report daily that they have rendered 15, 20 or even 30 Taliban fighters "harmless." In other words, they have been liquidated (which, of course, has never been verifiable). In the future, it may be the other way around. Each day the world will announce the number of Taliban who have allegedly defected to Karzai's side. But it will be the same kind of number tricks once used by Mohammad Najibullah, the head of Moscow's puppet government in Kabul, in the midst of the Russian-Afghan War when he began seeking reconciliation with the mujahedeen in 1987. The exit program at the time wasn't even a month old when the Afghan party chief told SPIEGEL that, "Sixty-thousand resistance fighters" have already joined forces with the government.

Of course it was totally made up, but perhaps it wasn't a total sham after all. Past experience in Afghanistan has shown that when large sums of money are offered for regime opponents to lay down their weapons, the number willing to do so increases. And that could happen this time, too. For the defectors this often has more to do with the desire for personal gain than peace in Kabul. But back to Maulvi Mohammed Shah and his 20 fighters: He had been in a clinch with another Taliban commander, with whom he had been fighting, over who should supervise the lapis lazuli and emerald mines in the Jawand district. Now, since he has defected to Karzai's team, the government has officially taken responsibility for security at both mines. Shah has finally succeeded in defeating his rival. Thanks to Karzai's exit program.

The Division Between 'Moderate' and 'Radical' Islamists Is Nonsense

The number of defectors that we will soon be hearing about doesn't mean much though. The reason being that no one can define what kind of people they are and what kind of political influence they have. That was also true during Najibullah's time. At the end of the day and despite his efforts at reconciliation, the radical Islamists still ultimately took Kabul and toppled the leader -- and the defectors he had proudly presented did nothing to help him. They played no role at all.

Why? Because distinguishing between "moderate" and "radical" Islamists is nonsense. Karzai and the West will be able to move thousands of "moderates" to defect from the Taliban with money and offers of jobs. But the only ones who are decisive are those with whom the West still doesn't want to talk to: the radicals. After all, when the farmer finishes work and reaches for his Kalashnikov to patriotically fight against foreign intruders, it is the radicals he looks to. The Afghan government will only possess true authority in Herat, Kandahar or Jalalabad when these radicals are part of its ranks in Kabul.

A Lack of Girl's Schools? Women Wearing the Burqa? That's Not Really Drama

A man like Gulbuddin Hekmatyar, for example, needs to have some kind of political anchor in Kabul in the future -- even if that would be tantamount to self-castigation for the West. Hekmatyar is a typical representative of the elite that left Kabul University in the 1960s and founded Islamist parties and, under the repressive rule of the king's nephew, Mohammed Daud, were forced to flee to Pakistan in 1974. This is the year Islamists define as the start of the long civil war. After Najibullah was toppled, Hekmatyar was among those who reduced Kabul to rubble.

Hekmatyar is now living in hiding, but he still has his fighters, especially in the southeast. He has been prompt in his statements in recent days, with an astonishingly moderate position: He says he's open to peace talks with the Afghan government. But he is also calling for foreign troops to withdraw and for new presidential elections. From Hekmatyar's words, it sounds as if he is distancing himself from the Taliban, which earlier this week rejected Karzai's reconciliation program, lock, stock and barrel. "The government will not succeed, with the help of money, in dividing and weakening the Taliban," a Taliban spokesman said.

But this just shows how helpless the West is in just dealing with the word "Taliban." It's a term that politicians like to use because it eliminates the need to scrutinize the anti-Kabul front more closely. The reality, however, is very heterogeneous. Hekmatyar, for example, was never a Talib. In fact he was driven out of the country for a second time by the radicalized religion students in 1996. But when the Western alliance marched into Afghnistan in 2001, even those who once fought against each other had a shared goal: To force the foreigners out of their country again. The fact that people like Hektmatyar (and later the warlords of the Northern Alliance) were not bestowed with any influence under Karzai is what led to the current, catastrophic, security situation.

Reconciliation is good, but the question is with whom? Shutting out the real voices behind the insurgency, as German politicians are fond of proposing, is absurd.

There Is No Military Solution

The proposal to officially divide government power in Kabul isn't new. The Russians already tried that back in 1989. Moscow's foreign minister, Eduard Shevardnadze, flew to Islamabad to forge a coalition between Najibullah's communists and the mujahedeen. The American and Pakistani secret services, the CIA and ISI, rejected rejected it; they wanted to finish the war against the Russians. Shevardnadze was deeply angered, according to former Taliban ambassador Abdul Salam Zaeef's autobiography, "My Life with the Taliban."

The question remains what the West promises itself from this new "policy of reconciliation".

Firstly: It is clear that the situation cannot be solved militarily; every troop surge is pointless. The new Taliban strategy is a victory for common sense, the country will be returned to the Afghans. The West can only assist this process. Furthermore, the West shouldn't exit in a mad rush: that would only cause another bloody civil war with all its bloody reckonings. Incidentally, that would be a war which, presumably, the Taliban would lose.

Secondly: If the West actually does manage to withdraw from Afghanistan one day and we still haven't built the nationwide girl's schools we so urgently desired in our naivety, and the women of Mazar-e-Sharif or Kandahar are still wearing the burqa -- then it is no real drama. The veil requirement was already lifted once in the past in Afghanistan and the school system was also reformed. All that happened during the reforms at the start of the 1960s. But those reforms failed -- which just goes to show that Afghanistan is quickly overwhelmed by rapid modernization. 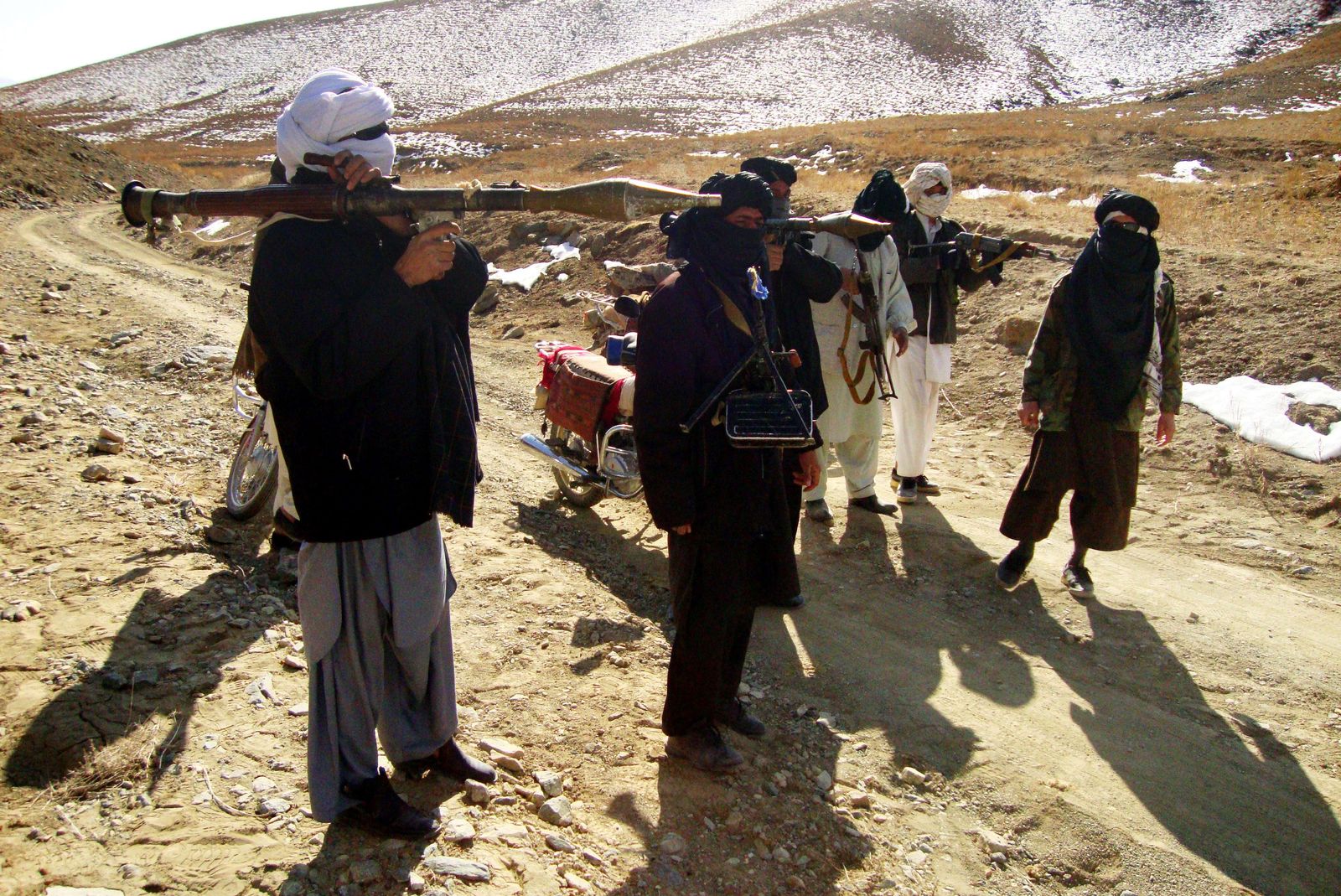 Taliban fighters: Distinguishing between "moderate" and "radical" Islamists is nonsense.