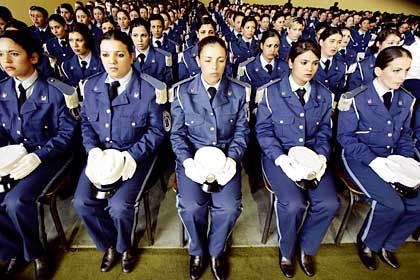 Algerian policewomen: an unusual job for women in an Arab country

In the early morning, the modest gas station on the Boulevard Bougara in central Algiers is already bustling. Attendants fill cars with gas, wash and inspect them. In one corner oil levels are topped up, in another a large vacuum cleaner sucks up dust from upholstery.

Moudjed Naima, 32, wears tatty olive-green overalls, green rubber boots and a cap. The small, energetic woman is cleaning a white pickup truck inside and out. She has been employed here for a year, working every day from 8 a.m. to 7 p.m., except Fridays. She got her diploma in photography and computer science, but it was little help -- she was unemployed until she asked for work at the gas station. "I knew there was a woman in charge," she says, "and I started right away."

Naima is married with two children. Like her husband, she earns around 100,000 dinar -- a good €1,000 ($1470) -- monthly, but she also receives tips. "I bring in more money that he does," she says, laughing. Every morning she gives him 200 dinar "for cigarettes and lunch." In some ways, Algeria is reversing traditional gender stereotypes in the Arab world.

Since the end of the deadly civil war between radical Islamists and the government at the start of the new millennium, Algeria has been in a state of flux. There are more girls enrolled in high schools than boys, and almost 61 percent of university graduates are women. "Education is many womens only window on the outside world," explains journalist Zeinab Ben Zita. The more educated a woman is, the greater her likelihood of independence.

Women all across the Workforce

Algeria is a young country -- around half the population is under 25. Unemployment is rife, particularly among young men. Young women, on the other hand, tend to be more eager to learn, more flexible and often make better use of what opportunities there are, taking what they get. Women currently account for one-third of the total workforce: Over half of university staff, 60 percent of hospital employees, 30 percent of judges and over 55 percent of journalists are women. Thirty women hold seats in parliament and 11 hold senior government posts, including the minister for culture and three ministers of state.

The Algerian government fosters this type of emancipation through academic training and jobs. The state is, in addition, the country's largest employer.

Touazi Fatiha works for a public-sector enterprise in a job that is by no means typical for a woman in the Arab world. For six years she has been station master of Agha train station, in central Algiers. A good 107 people report to her, including 7 women. Each day she coordinates the comings and goings of 80 trains through her station, usually working a 10-hour day.

Fatiha also went to university. She got a degree in biotechnology and quickly found a job in a food company, where she worked for three years. Then the company went bankrupt and Fatiha was left jobless. Unable to find another job in her professional field, she replied to an advertisement published by the railroad company, which at that time was looking for women with a university education.

There are 14 female station masters in Algeria today, five of whom work in the capital. The railroad company employs women as engine drivers, repairwomen and in the supervision of train operations. "We have the same rights and can take on just as much responsibility as the men," says Fatiha. She is the classic model of a career woman -- unmarried, ambitious and intelligent. She smiles easily and seems frank and open, with a comfortably unobtrusive air of authority. "Im happy where I am and I want to build up a career within the company, thats my aim," she explains.

A Roadblock in the Path to Emancipation

Leila Hamouda, 35, also has an unusual job for a woman in an Arab country -- she belongs to a police special unit in a position she has held for 14 years. Indeed, she's the only woman in her precinct. She wears the dark blue overall of her unit, a blue cap and a handgun in her duty belt. Respect has never been a problem, the mother of two explains. She usually scores highest at the shooting range and has also served on the team of presidential bodyguards.

In Algeria, equal rights for men and women are enshrined in the constitution. However, the Family Code which has been in place since 1984 has reversed many elements of progress. "In public life women are concerned with their rights, but within the family they accept subservience," says Nadia Ait Zai, a lawyer and womens rights specialist.

Women in Algeria have had the right to file for divorce since 2005, yet they still cannot marry without the permission and the signature of a male relative. Algerian family law still classes women as minors. "We are progressing towards a modern society, but this is not always apparent, because we are still caught up in the conflict between the traditional and the modern," says Ait Zai.

Back at the gas station in the center of Algiers, Moudjed Naima has finished cleaning the pickup truck. She flaps her towel once more quickly over the fittings and then looks around to see whats next to be done.